New York will soon have a 750-mile interconnected system of trails crossing the state north to south and east to west. Meet the Empire State Trail.

During his State of the State address in Westchester County last month, Gov. Andrew Cuomo confirmed a construction project to create the “largest state multi-use trail network in the nation.”

Officially named the Empire State Trail, the $200 million project will construct 350 miles of new trails linking two existing trail networks: the Erie Canalway and Hudson River Valley Greenway.  When finished, the 756-mile Empire State Trail will span the southern tip of Manhattan to Canada. An east-to-west spur will connect Albany to the shores of Lake Erie.

He declared the state will complete the trail by 2020. 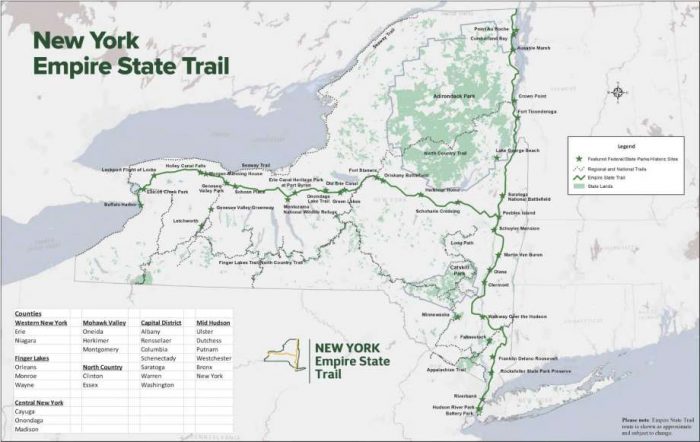 “The Empire State Trail, once completed, will be the nation’s largest state multi-use trail network, providing residents and visitors alike unprecedented access to New York’s outdoor treasures, driving tourism and economic activity to communities across the state and helping to protect our environmental resources for generations to come,” Gov. Cuomo said.

He said construction will occur in three phases. He will propose the state set aside $53 million from its budget for phase one.

When finished, the massive state trail will be open to cyclists, hikers, joggers, and cross-country skiers. Trails like the Appalachian Trail, which intersects the Hudson River Valley Trail, are longer. But many do not permit cycling or skiing.

The ambitious two-year project will have to connect the 360-mile Erie Canalway, which is 80 percent complete, and the 260-mile Hudson River Valley Greenway, which is only 50 percent finished.

The governor did not say whether all of the connecting segments will be off-road, though we expect they will be safe for pedestrian traffic. Presently, State Bike Route 9 is a 147-mile, on-road extension of the Hudson River Valley Greenway that leads to Canada.

Up Next: The End Of Lead? Federal Gov’t Order Bans Sinkers, Ammo