A quirky shop in Minneapolis along the bank of the Mississippi River represents a new wave of outdoor retail. 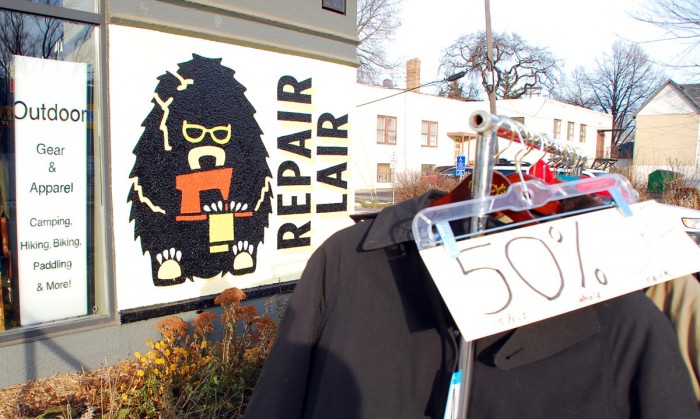 Repair Lair brands itself as a “repair and consignment shop that specializes in outdoor gear and clothing,” which is accurate, but doesn’t tell the whole story. 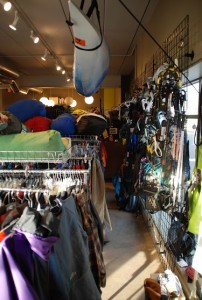 Within the squat retail space lay a handful of aisles, shelves, and hooks all stuffed with a motley collection of coats, backpacks, boots, shoes, hats, gloves, lanterns, snow pants, and anything else that once had a home and is now ready for another. Just beyond the piles of for-sale wares are a line of sewing machines, work tables, a dizzying array of fabric swatches and scrap materials, and a formidable collection of zippers, buttons, and miscellaneous fasteners of all shapes, colors, and sizes.

In every item, within every stitch, and on every shelf and hook rests the future of outdoor and recreational gear — not the new; the revitalized.

“I think the world of repair is expanding,” affirms Nancy Ford, the store’s owner and founder. “I think the consumer is looking for it more. I think people want to have that as an opportunity, and when they don’t it is because they don’t know the service is available to them.”

Why would that be? “Because shit is so f#&@in’ expensive!” Ford quickly laments.

And that, in a nutshell, is what really makes this spot so attractive; its rough edges, matter-of-fact knowledge and inescapable personality. It has something for everyone and a mission we can all rally around: “Spend less on gear and more on beer.” 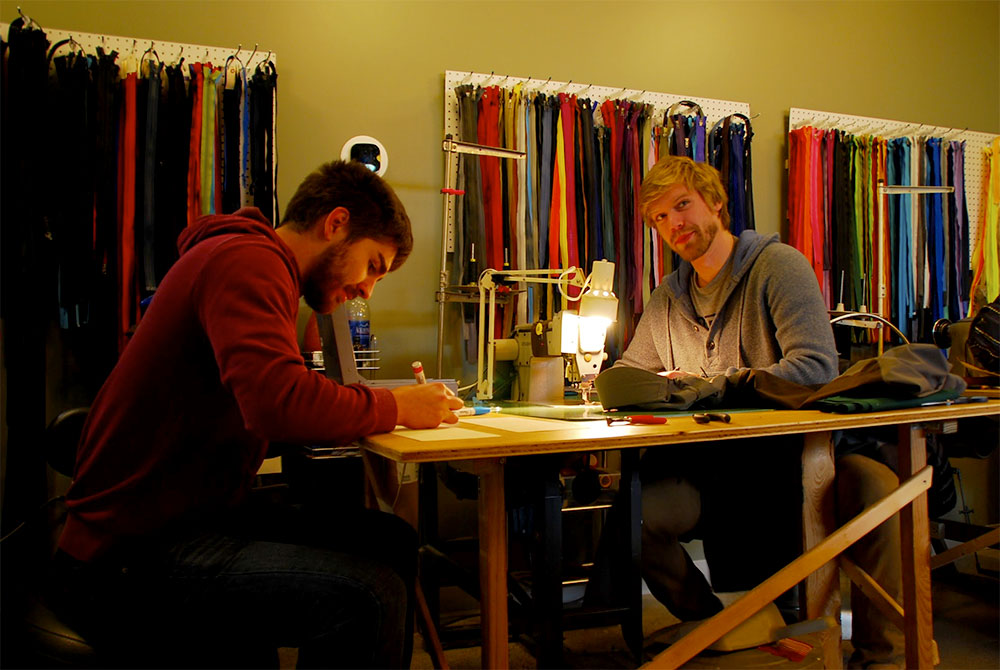 I walked into Repair Lair with an array of broken-but-not-quite-useless items I’d put off donating to Goodwill out of a reluctant optimism I would someday learn to fix them. Someday came and went, and Repair Lair’s unique repair and consignment model meant these items would come home with me rejuvenated, put some cash in my pocket, or find new life as scrap material.

“OK, let’s see what ya’ got,” Ford urged excitedly. Upending my bag, I dumped the goods onto the table before her: a torn lobster mitt, a pair of wind pants with a broken zipper and an unlaced Keen sandal.

She poured over the items carefully but quickly, assessing the time, cost and logistics of each repair. Immediately she set to work on the sandal, almost reflexively lacing bungee cord and assembling the complicated drawstring buckle. Next, she slapped a bright green tag on the wind pants; most of the work that comes in is busted zippers, she said.

“They’re also the biggest pain in the ass,” she chuckled. 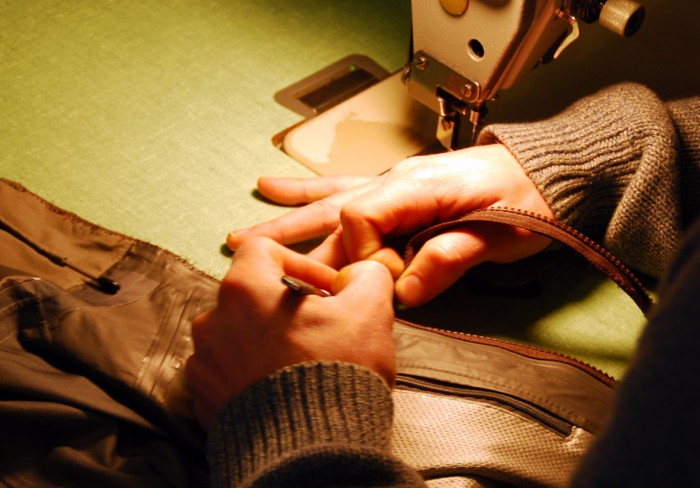 The lobster mitt was next, a delicate repair delegated to the shop’s virtuoso sewer, Alex Jacobson. The crew here is small, just five, but between them the tiny shop manages to keep up with all the customers officially referred here by REI, as well as the warranty repairs sent in by the regional Patagonia stores. And, of course, the walk-ins.

Just 18 months old, the business has asserted itself as a growing force in the local outdoor retail industry. But, according to its owner, not as a competitor.

She’s right. There are other repair and consignment shops that specializes in outdoor gear — The Gear Fix in Bend, Ore., and Thrifty Outfitters above Midwest Mountaineering in Minneapolis. But unlike them, Repair Lair is repair first, consignment second, and you won’t find much new gear on the shelves.

And unlike virtually every store of any kind, the store’s M.O. is not to get you in the door so you can shop. As a collective of outdoor enthusiasts who know the demands an active lifestyle in the elements places on gear, they want to keep folks on their adventure, even if that means just answering questions and giving advice.

While not every member of the scant crew at Repair Lair has put coats and packs to the most extreme tests, there is an abundance of experience and knowledge permeating the business. Julian Rodriguez, one of Ford’s senior staff, spent six years as a camper in Ely, Minn., culminating in a 38-day trip along the Kazan River in the Arctic. That came on the heels of a three-day, 275-mile bike trip.

“There is no rule that says ‘pay more money, get better gear,’” Rodriguez cautions. “A lot of times, you go up in price so you can go down in weight and down in reliability. The technology is almost always behind that way. If you really want to know what gear is best, talk to the people who have done the ridiculously long, intense outdoor trips. They’ve used it. They know.”

If that’s the case, customers here could have a lot to talk about. Ford’s resumé alone is a trove of experiences putting quality gear to the test — railroad conductor, towboat deckhand, bike messenger, wilderness therapy instructor, ice core driller in the Antarctic, and for the fifteen years before opening this store, outdoor retail. 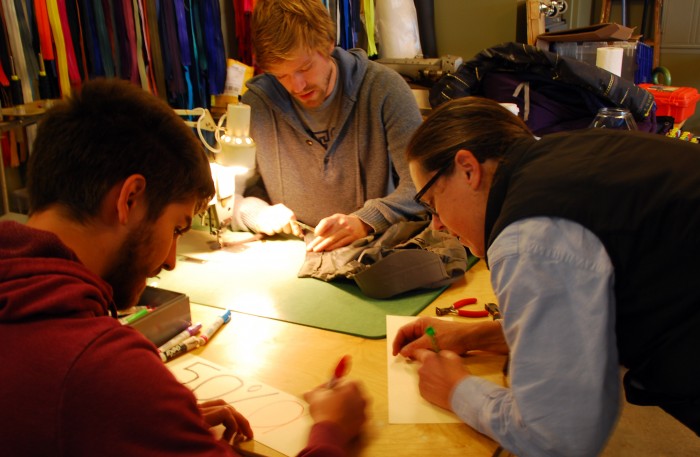 “My background? It’s diverse,” she said, laughing. “Sometimes I’ll forget and someone will remind me — ‘Oh yeah, I’ve done that, too!’”

The whole of her experience, coupled with a penchant for thrift store deals, lent her an eye for quality gear and vintage deals. Now, her aim is to keep folks exploring the outdoors while giving good equipment a second life and keeping it out of a landfill. Oftentimes that means stitching mitts, replacing zippers and sewing reinforced “bike butts” for cyclists’ pants. Sometimes, that means taking on the irreverent odd job.

“I once tailored a mink coat for a small dog. The customer asked, I thought it would be weird, so I did it.”

Even if it is outside the little shop’s scope, you’d be wise to stop in and ask for help. Nobody that comes in is turned away, whether that means they help you find another repair shop, or send you with a discount coupon for a future visit, it’s hard not to leave Repair Lair feeling better about your stuff. So far, weekend adventurers and outdoor professionals alike are taking notice and liking what they see. Sewing machines buzz away while customers banter with Ford and her staff about deals and recent treks.

“We’re doing good,” Nancy said, smiling and speaking of her first 18 months in business. “We’re keeping food in the dog bowl and the checks ain’t bouncing.”

—Repair Lair is at 3304 East Lake Street in Minneapolis. If you’re out of state, you can contact the store for advice or to schedule a repair shipment at 612-729-9095.

Up Next: 9 Hours On Screens: Group Helps Teens Get Outdoors