Who would willingly enter into an endurance competition against an electric car? Well, Robbie Balenger, of course.

In his latest adventure into the “pain cave,” endurance runner Robbie Balenger goes head-to-head with a Tesla electric car.

The setup was simple. A fully charged Tesla Model 3 would drive through Central Texas until its battery ran out; then, Balenger would run the same distance to prove he could “outlast” the electric car.

Ultimately, he did exactly that, running 242 miles in just under 77 hours — which fell short of his goal of 72 hours.

But Balenger accomplished this while facing average temperatures of 94 degrees Fahrenheit, humidity at 88%, and a little less than 5 hours of rest. Oh, yeah — and the race also included about 13,000 feet of elevation gain.

“I outlasted the Tesla,” Balenger says in the video. 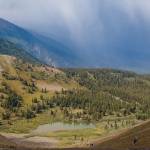 With The Colorado Crush, endurance athlete Robbie Balenger accomplished three of the state's most difficult goals in one summer. Read more…