Lifestyle audio brand Skullcandy has partnered with a slew of athletes to address topics like societal barriers, mental health, and climate change.

Skullcandy is teaming up with 14-year-old freeskier and climate change activist Kai Jones as part of its Sound Without Boundaries campaign.

And it’s not just Kai Jones. He’s one of 20 multidimensional athletes, musicians, and visual artists Skullcandy has partnered with to effect positive change.

The yearlong integrated initiative will involve spotlighting each member and their passions, crafts, and community involvement. It will also create content alongside Skullcandy’s Music With a Mission program to support areas of climate and mental health advocacy.

“We were deeply impacted by the events of 2020, and as a brand, Skullcandy felt compelled to use our platform and resources to promote positive change,” said Jessica Klodnicki, chief marketing officer at Skullcandy.

“Sound Without Boundaries is our way of illuminating people who support causes that resonate [with our consumers].”

The campaign will run through 2021 and feature audio, visual, and animated content, as well as several artist product collaborations. Learn more. 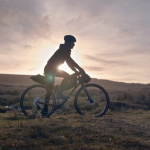 Year of the Bike: 'Whatever The Road' Inspires Exploration Near Home

Bored or stuck at home? Longing to travel? Explore the roads and trails near you. We guarantee you'll find adventure somewhere — wherever the road takes you. Read more…