‘He was not only caught, he was literally being hung by his neck by his backpack.’ 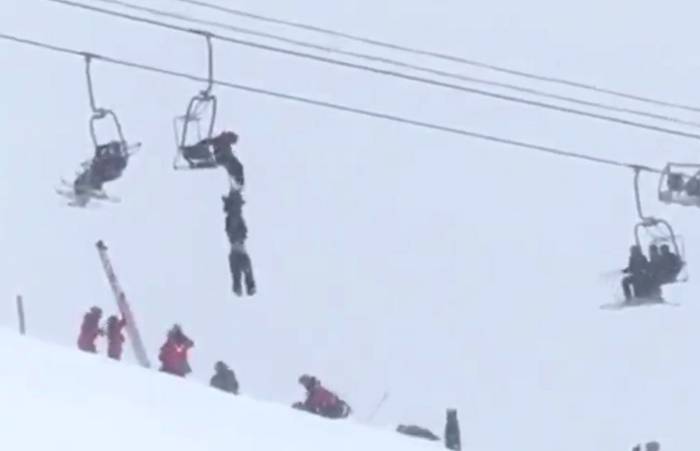 Moments after a man became entangled on a chairlift at the Arapahoe Basin Ski Area in Colorado Wednesday, a fellow skier climbed the chairlift tower and shimmied across the lift cable to free him, the Denver Post reported.

Mickey Wilson, 28, was behind the unidentified man on the lift. The victim’s backpack got caught on the lift, and dragged him around the top and back down the mountain. Operators stopped the lift, but not before he was hanging 10 feet off the ground.

Fortunately for the victim, Wilson is a part-time ski instructor and world-champion slackliner. Slackline, for the uninitiated, involves walking and performing stunts on loosely-stung or springy lines. It requires exceptional balance and strength, attributes that came in handy during the rescue.

“It was one of the most scary things I’ve ever seen,” he said. “Just seeing a person get the life sucked out of them. I kind of stopped thinking and just started acting.”

According to Wilson, bystanders attempted to create a human pyramid to reach the man, but failed.

“That’s when I realized — it all kind of snapped together — that ‘I can climb this tower and get to him,’ ” he told the Post. It took about four or five minutes for Wilson to reach the victim.

Today I saved someone’s life. I think some strange forces were at work. I planned to ski by myself today. As fate had it though, some good friends ended up recognizing me despite my ski gear, and we joined forces for an epic pow day. Again, fate intervened. One of our crew got his backpack strap stuck in the chairlift as he tried to unload and the lift dragged him back down the hill. We were on the chair lift behind so we unloaded and ran down the hill to help him when we realized the worst possible thing had happened. The backpack had wrapped around his neck and he was unconscious, dangling 10 feet above the snow. Panic set in and we struggled in vain for about a minute to build a human pyramid to get to him but the powder was too deep and we toppled over. I yelled at the lift operator asking if the lift ran in reverse and he cried no. Ski patrol was on their way but not there yet. Panic was becoming terror as we realized we were about to watch our friend die in front of our helpless eyes. Then I had a eureka moment. I realized I could climb the lift tower above the chair and climb onto the cable and shimmy down to him. I knew my slackline experience prepared me perfectly for this so I burst into action. I climbed the tower and slid down to the the chair. It was second nature, just like being on a slackline only way colder and made of steel. I climbed down the chair and I first tried to break the strap by kicking it but I couldn’t. A newly arrived ski patrolman threw me a knife and I luckily caught it on the first try and cut the strap. Our friend fell like a doll into the snow. 8 or so ski patrolman then began CPR. Thankfully they were able to restore his breathing, ski him down to the base, and get him into an ambulance which rushed him to the hospital in Denver. I’d like to take this moment now to thank the #slacklife for the skills it has given me. It was incredibly fortunate I was there and able to act quickly. I’d also like to thank ski patrol for their strong work reviving our friend. I just got an update from the hospital and he’s doing quite well and will be released tomorrow! #thankful #lovelife #rightplacerighttime

Wilson scaled one the lift towers and worked his way 30 feet across the lift cable. Once he reached the unconscious man, Wilson managed to cut him loose. The man fell 10-15 feet into a waiting circle of ski patrollers, according to the Post.

The man, whose name was not released, was immediately rushed by ambulance to St. Anthony Summit Medical Center in Summit County, then transferred to St. Anthony Hospital in Lakewood, Colo.

The man’s condition remains unknown, but Wilson told the Post he spoke with him on FaceTime Wednesday night, and that he appeared OK.

Arapahoe Basin, located 50 miles west of Denver, said the man’s backpack became entangled on a three-person chairlift when he tried to get off. The resort said he was pulled around the bullwheel at the top of the lift and back down the mountain before the operator shut down the ride.

According to Adrienne Saia Isaac, an A-Basin spokeswoman, the resort is investigating the incident. But she told the Post, “The lift is open to the public. It did not malfunction.”

Up Next: Rules Change Makes It Easier To Sell Public Lands