The Rainier Infinity Loop presents one of the gnarliest FKT challenges out there. And it’s now seen two new records in a single month.

And that’s when he’s not earning a living as a guide for Denver Mountain Guiding, training athletes at The Alpine Training Center, and supporting his family of three. Needless to say, piquing his interest requires lofty physical goals and challenging terrain.

Last month, Antin and two team members — Erik Sanders and Sam Ritchie — embarked on one of the thru-hiking world’s most daunting challenges: the 130-mile, 40,000-plus-foot of gain Rainier Infinity Loop.

Just one week before their attempt, Scott Bennett shattered the previous record. But Antin’s team persevered, setting a new FKT for the trek of 59 hours, 21 minutes, 7 seconds. 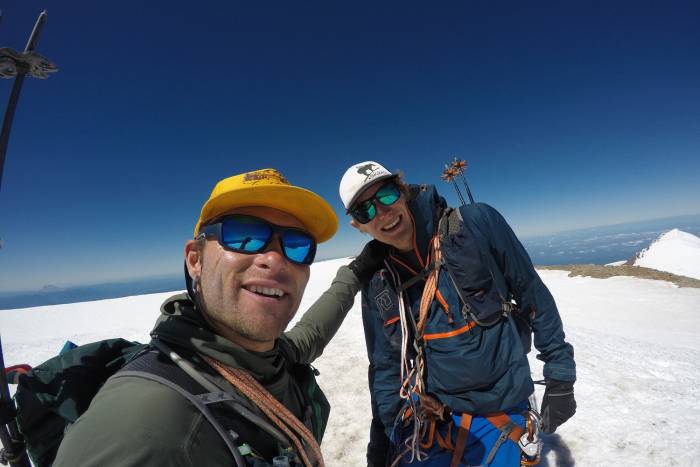 Any attempt on the Rainier Infinity Loop FKT demands attention; the “trail” includes ascending and descending the most glaciated peak in the contiguous United States not once, but twice. And it involves all the potential perils of mountaineering.

‘To Infinity’ and Beyond

Antin first heard of the Rainier Infinity Loop through “To Infinity,” a Dirtbag Diaries podcast on the late alpinist Chad Kellogg. He first dreamed up the Infinity Loop, but he died during a climbing accident before he could realize it.

Records on FastestKnownTime.com state the Rainier Infinity Loop FKT was first set in 2016 by Jason “Ras” Vaughan and Gavin Woody. It has since seen two more records, Antin’s included.

Antin long admired Kellogg’s career and multiple, prolific speed ascents. And he vowed to complete the Loop in homage to Kellogg’s vision. 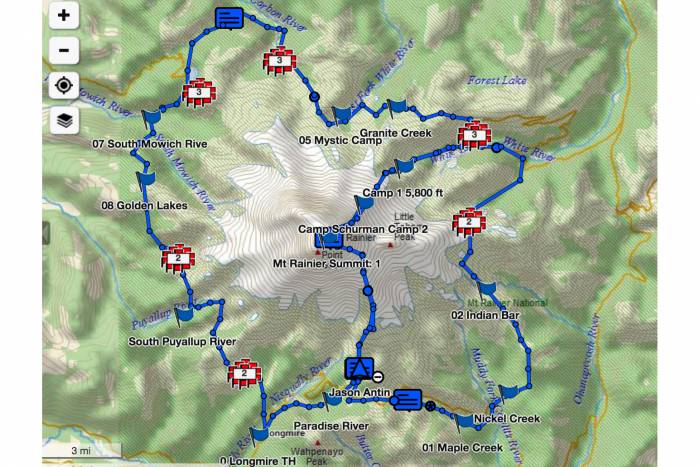 For an attempt on the Rainier Infinity Loop, adventurers must possess the physical and mental tools to tackle a long-distance hike or trail run under a time crunch. And they must also master the skills to travel on glaciers safely and efficiently.

Depending on the route chosen, rope, ice axe, and crampon skills may work in unison with rock, snow, and ice protection. Crevasse rescue and self-arrest techniques can also be pertinent.

These requirements make FKT efforts on the Rainier Infinity Loop more daunting and demanding than trails that only stress distance and vertical gain.

Antin assembled a crew of three to tackle the daunting logistical, physical, and mental hurdles of his newfound goal. Antin would act as a climbing lead, having the most experience scaling alpine peaks. Sam Ritchie of Boulder, Colo., churned the aerobic engine in concert with unbridled enthusiasm. 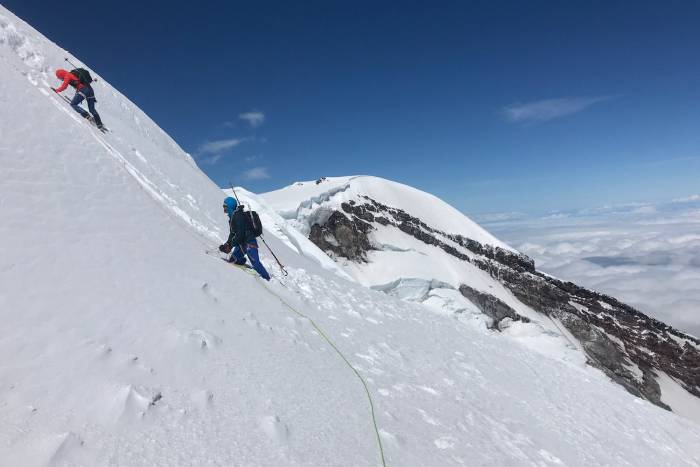 Finally, Erik Sanders of Golden, Colo., rounded out the team with some climbing experience, a deep adventure racing background, and a penchant for never complaining. Once committed, the trio established clearly defined goals:

The team determined to attempt the FKT under self-supported guidelines, which allows the use of any resources that are available, including caches left before the attempt. Under the honor-system rules, serendipitous events are also permissible, such as fellow trail users giving food and drink. The team finalized logistics and tightened up training to adapt to extended outings and glacier travel. Confidence grew that they could break the existing record.

A week before the team converged on Mt. Rainier, however, Scott Bennett cleaved an impressive 30-plus hours off the Infinity Loop FKT in a remarkable solo effort. His time of 66 hours 22 minutes became the new FKT mark, set on June 24.

Although this magnified the challenge, Antin and team continued preparations undeterred. They made final preparations, even setting up camp and a cache at the White River Trailhead and Campground on the northeast flanks of Mt. Rainier. That was where the team would transition after their laps over the summit. 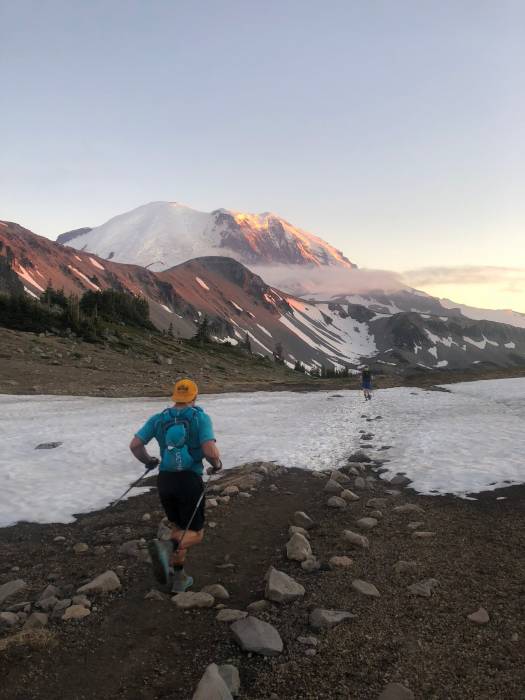 At 5:01 a.m. on July 10, 2018, the clock began ticking away at the team’s assault on the Rainier Infinity Loop FKT. The Muir Steps at Paradise served as the starting point and terminus of the grand adventure. The parking lot also served as their second cache site, a black minivan to provide an oasis of relief and fuel at the halfway point of their FKT attempt.

Even with an early navigational error, the Skyline Trail brought the team to Muir Camp in 2½ hours; they ascended the Disappointment Cleaver route and gained the 14,411-foot summit in 6 hours 5 minutes. This effort is even more impressive considering it was Sanders’ first time on the mountain and Ritchie’s first glaciated peak climb.

The descent followed the Emmons and Inter glaciers to the dirt of the Glacier Basin Trail, which included a 2,000-foot glissade. A quick change to trail running shoes and a downhill grade brought the team to their transition camp at the White River Trailhead in 3 hours 55 minutes.

Fueling, hydrating, and exchanging climbing gear for trail running kits took a scant 43 minutes. Antin and crew continued their journey on the Wonderland Trail, circling clockwise for 30 miles toward Paradise. 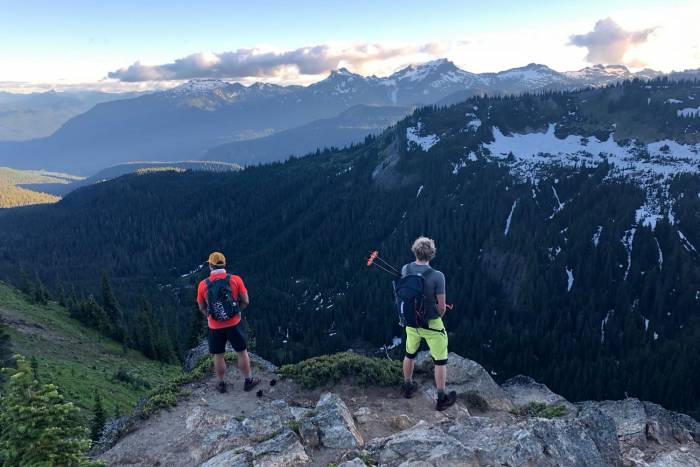 At 12:52 a.m., more than 19 hours into the double-loop adventure and 9 hours after leaving the first transition, the team piled into the minivan at Paradise, cold and hungry. Heat, food, and fluids were consumed voraciously in the dark silence until Ritchie expressed his trepidation of continuing. His limited snow climbing experience and the understandable fatigue gave way to sound judgment.

The party of three became a party of two; Antin and Sanders left the relative comfort of the minivan after just over 2 hours, officially tagging the Muir Steps for the second time at 2:59 a.m.

Antin and Sanders retraced their steps from the first lap, omitting the navigational error, and rounded the summit for the second time in a single day in 8 hours 10 minutes.

Warmer conditions slowed the descent compared to the first lap, and Antin had to MacGyver a broken crampon. But the duo still made it to the final transition in 4 hours 10 minutes after leaving the summit. Ahead loomed 67 counterclockwise miles on the Wonderland Trail, so sleep was a priority after refueling and rehydrating.

Sleep proved difficult, however, so after 2 hours of dream chasing and about 4 hours in camp, the team decided to set off. And with the tougher sections behind, Ritchie rejoined the mix. 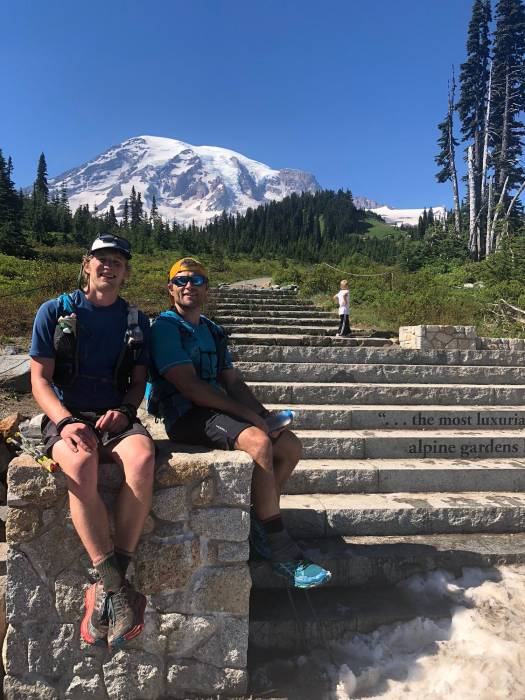 This final leg of the Rainier Infinity Loop proved the longest in duration. But with the mantra of “one day — you can do anything for one day,” the trio pushed the downhills, ran the flats and rollers, and hiked the uphill sections nonstop for nearly 21 hours.

Antin and Sanders reached the Muir Steps on July 12, 2018, for the third and final time, completing the Rainier Infinity Loop. The clock stopped at 59 hours, 21 minutes, 7 seconds, breaking Scott Bennett’s record by 7 hours.

GearJunkie would like to congratulate Jason Antin and Erik Sanders on establishing a new FKT on such a grand objective. Chad Kellogg would surely be proud.

Up Next: Win a Trip, Do Good: Join LifeStraw on Humanitarian Mission in Mexico