A trio of alpinists claimed the first winter ascent of what’s known as ‘Killer Mountain’: A 26,660-foot Himalayan monolith in northern Pakistan — the ninth highest peak in the world.

Properly called Nanga Parbat (Naked Mountain in Urdu), the mountain’s reputation and unofficial nickname is due to a history of lethal storms and avalanches that have caused a fatality rate of 20 percent, making it among the top three most dangerous 8,000-meter peaks to climb, according to NASA. As of March 2012, there had been a total of 335 successful ascents of Nanga Parbat. 68 had died trying and close to 30 climbers lost their lives in an attempt before the first-ever summit in 1953.

Solo and sans oxygen, badass Austrian climber Hermann Buhl scaled the northern Rakhiot face in the first ascent. Since then, only 334 other climbers have stood atop Nanga’s harsh crown (337 counting this achievement)—but those were all summer ascents.

Against the odds and elements, three men from around the world — Simone Moro of Italy, Alex Txikon of Spain, and Ali Sadpara of Pakistan — reached the summit on Feb. 26 after 83 days of sub-zero temperatures (-45 degrees Fahrenheit) and 30-mile-per-hour gusts up the Kinshofer Route. A fourth teammate — Tamara Lunger — reportedly stopped just short of the summit. 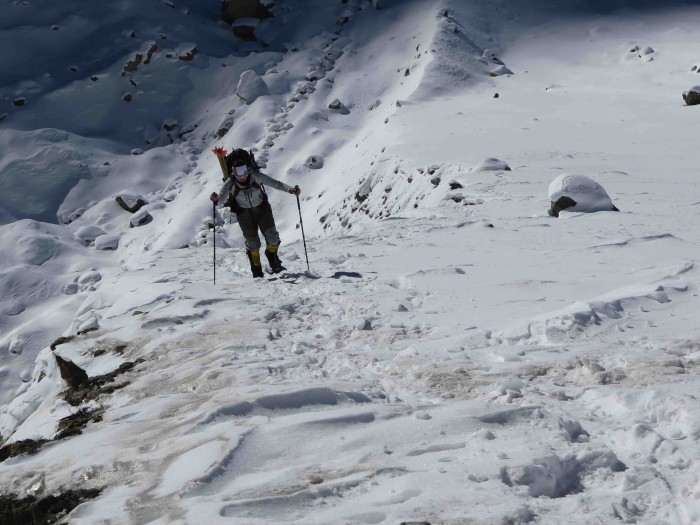 It was the second winter attempt at Nanga Parbat for Moro, who was forced to turn back during a 2014 expedition with David Goettler and Emilio Previtali.

With the successful winter ascent of Nanga Parbat, only one 8,000-meter summit remains unclimbed in winter — K2.

A full journal of the expedition will be posted on The North Face’s Journal later in March.