Trek will seat more than 50 elite cyclists on top of a loud, electric design that pays homage to the Japanese hosts of the long-awaited 2021 Olympics. The new color scheme, dropping in just a few weeks, is bright and in-your-face, featuring a gradient that starts with a deep red, and then transitions through pink, gold, and blue.

The graphic wends its way up the bike, mimicking the hues of the sunrise emerging in the east. A purple-tinted Trek logo over the top brings it all together.

The design has been in the works since 2019 in anticipation of the original 2020 Olympic dates. Of course, Trek’s unveiling of First Light, like the Games, was postponed for a year due to the coronavirus pandemic. 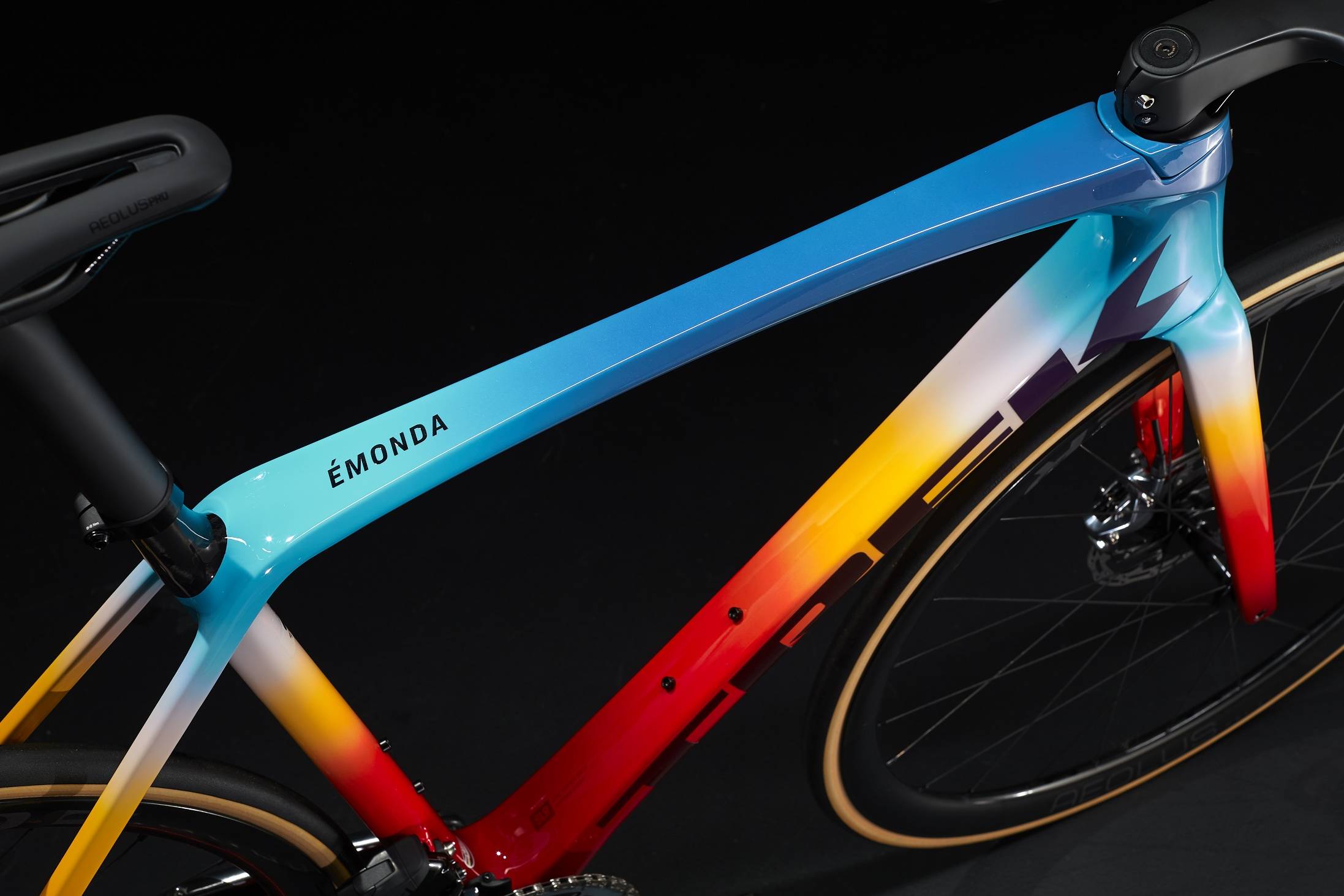 The First Light design is credited to Trek’s Senior Product Graphic Designer Micah Moran. Moran has spent the last year and a half dialing in his vision for the bikes that Trek hopes will see ample podium time when the Olympic games kick off this weekend.

Moran said he traveled to Japan in late 2019 to find inspiration for the project. But the design really came together for him as he stared out of the window on his return flight home.

“Japan is the land where the sun originates; the name means ‘the sun’s origin,'” Moran said. “These connotations that come from the meaning of the word Japan … each new day begins there, and here I was in a new day and seeing those colors, and that really was the moment it kind of clicked.”

But, considering the sheer number of countries and competitors headed to Japan and the wide variety of kits they will bring to the party, he said it was important to create something universal — and inclusive, too.

“I wanted something that was colorful enough to maybe not match, but match sometimes, and blend into all of the jerseys, all of the different colors, to not feel like it was too tailored to one thing or another,” he said. “Hopefully, ultimately, that’s what you see with the blending of all these colors [together].” 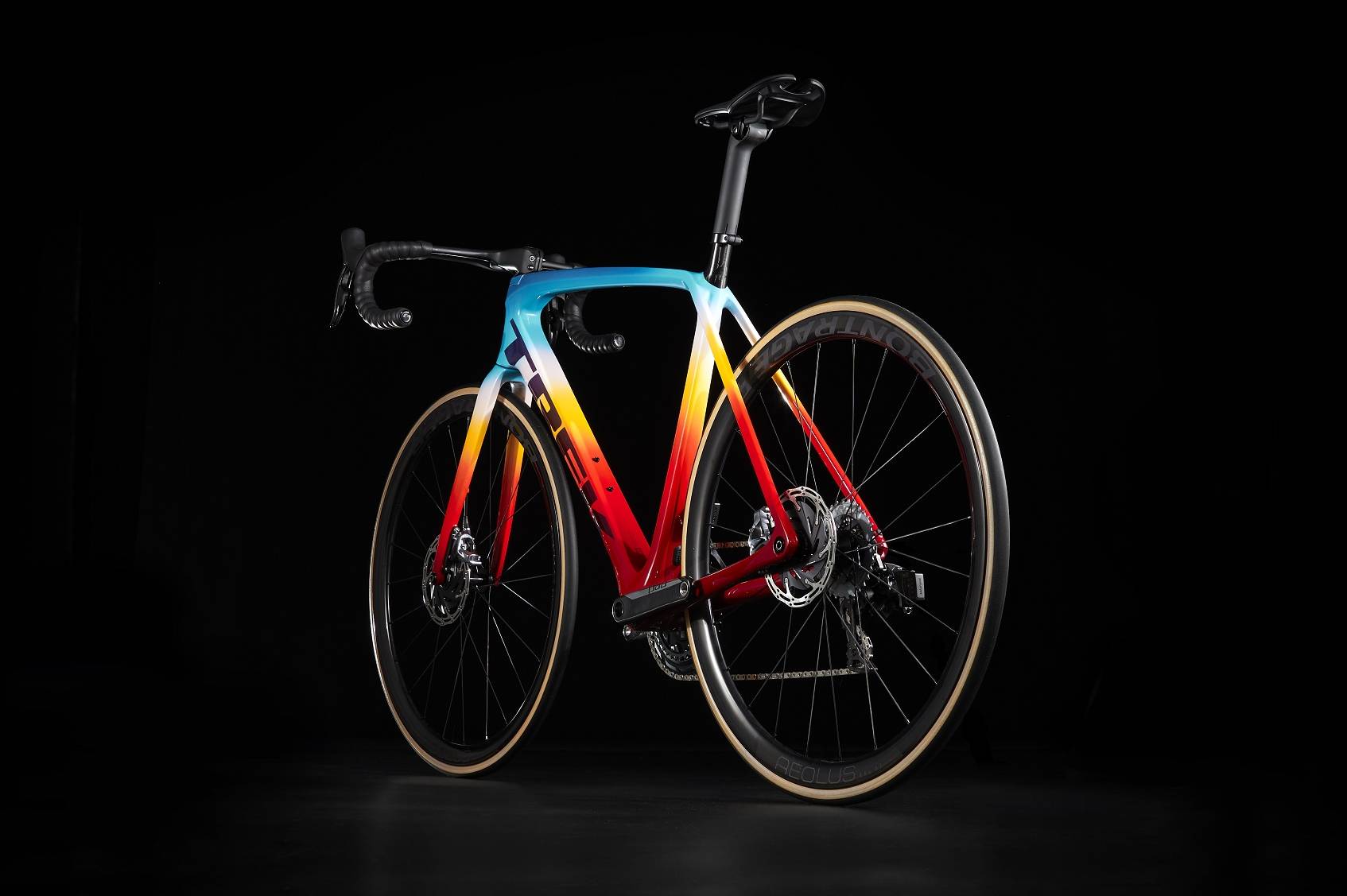 Olympians will be the first riders to show off the new design, but members of the public can also get their hands on it. The First Light color scheme is the latest in Trek’s Project One ICON series, which includes a collection of premium, complex paint schemes designed for riders who want a super-refined look.

The schemes have gone through several iterations and currently include a reflective Chroma finish, bubbly Seafoam, shimmering Psychedelic Marble, and Gold Leaf.

Moran said the Project One ICON paint schemes require a lot more precision and detail than normal production colors. However, he felt that there was a place for high-end, detailed, and bespoke designs — a place where paint could really drive a bike’s appeal.

“Sometimes the design and the customization through your own choices is that driver, but I wanted something where I knew that there were some new paint technologies that I could bring into ICON that couldn’t be executed on just any normal bike, that you couldn’t put into (a) mainline.”

Trek has made the First Light color scheme available on the Madone SLR, Émonda SLR, and Supercaliber models.

For the Olympic riders preparing to clip in and others who purchase a First Light bike in the next months, Moran said he hopes everyone who sees it understands how thoughtful and deliberate the design process was.

“Nobody’s going to put it next to another bike and say, ‘oh, it looks just looks like that other one,’” Moran said. “It’s completely unique, and hopefully, that inspires whoever is going to throw their leg over that bicycle.”

Triathlons Have a Diversity Problem: Here's Who's Fixing It

Black athletes make up less than 1% of triathletes in the U.S. and Canada. Vanessa Foerster is ready to change that. Read more…

Up Next: ‘The Trouble With Bike Apparel’ Short Film Eyes Industry’s Shortcomings