In a sharp turn from allocations within the recent White House budget proposal, President Trump tweeted for full funding of the Land and Water Conservation Fund. He also called senators to address the funding crises within the national parks.

The Land and Water Conservation Fund is a little-known funding program that supports a wide range of outdoor recreation in both cities and rural areas, funds public lands access projects nationwide, and much more.

More than 40,000 projects have touched every county in America since its inception in 1964. The bonus of this fund is that all $900 million comes from offshore oil and gas leases, and it never touches the taxpayers’ pockets.

In 2019, lawmakers permanently reauthorized the fund, but the reauthorization didn’t include funding. The LWCF has only seen full funding twice in its history, as funds end up being siphoned off for other budgetary priorities.

Just a few weeks ago, the White House issued its annual budget proposal. Public lands advocates were quick to point out the devastating lack of funding for public lands. The budget recommended a 97% cut for the previous year’s funding of the Land and Water Conservation Fund, which was marked at $495 million.

Although only a proposal, if enacted, this decrease in funding would deal a serious blow to outdoor recreation and defy the bipartisan effort of the public lands package S.47 recently passed in Washington, D.C.

And yet, on March 3, President Trump released the following tweet: 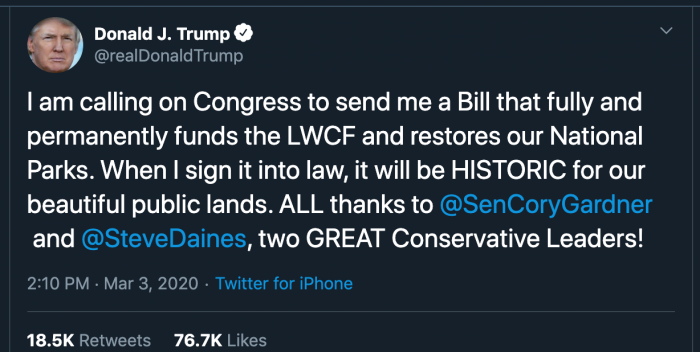 The swift call to arms is both surprising and perplexing, and yet greatly welcomed by the conservation community. The Wilderness Society, Sierra Club, Backcountry Hunters & Anglers, the National Wildlife Federation, and others have called for support of the LWCF.

In an even more interesting move, senators are likely introducing such a bill today, and it’s set to fast-track through the system. It would account for full funding of the LWCF, $1.3 billion to address the backlog of issues within our national parks system, and potentially even more dollars directed at other federal lands, like national forests and the Bureau of Land Management. It would seek to fund, over 5 years, about half of the $12 billion maintenance backlog in National Park Service facilities.

Co-sponsored by Sens. Joe Manchin (D-WV), Cory Gardner (R-CO), Mark Warner (D-VA), and Steve Daines (R-MT), the once-again bipartisan effort looks like it might give this bill a shot at passing through the ever-at-odds American political system.

“This coordinated effort by senators on both sides of the aisle confirms that conservation and access are inherently bipartisan values,” stated John Gale, Conservation Director of Backcountry Hunters & Anglers.

“We have the opportunity to ensure that federal land managers have the resources they need to responsively oversee critical lands and waters — and advance conservation and access projects that make our communities more livable, strengthen our economy and uphold our legacy of public lands, waters, and wildlife.”

It’s worth noting that both Gardner and Daines are up for an intense re-election year, and yet, a bill like this could prove monumental for American outdoor recreation.