Even with climbing’s massive growth in popularity, the world’s hardest routes remain enigmatic.

It’s surprising, for example, that only Megos has climbed both Ben Moon’s “Hubble” and Wolfgang Gullich’s famously difficult “Action Directe.”

We can now add Buster Martin to that list, although he didn’t decide to work on the problems because of their elite-level grades. For Martin, each line represents a quintessential piece of climbing history.

In the video of his smooth-as-silk send, Martin reflects on the “vision” of Gullich, who bolted a futuristic line that continues to challenge climbers 3 decades later.

“I don’t see the need to make much of a comparison in difficulty,” he said. “For me, they’re not about the difficulty. It’s the same for ‘Action.’ I wanted to climb it because it’s an iconic route and a really beautiful piece of climbing.” 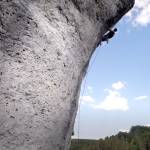 Explore the Climbs of Germany's Frankenjura, Home of World's First 9a

With more than 100 years of climbing history, this crag in southern Germany still has 'limitless potential,' climbers say.  Read more…