See the inside of your ORCA cooler in the dark with built-in LEDs that light up your drinks, food, or whatever else is inside.

We’ve all done it, shoved handfuls of ice around in search of that last beer in a cooler full of ice and Diet 7UP. It’s the cooler catch-22: To keep beverages cold, ice needs to be on top. But to see the beverage you want, you have to move the ice out of the way.

Up to now, it’s been the cost of doing business during camp outings and tailgate parties. But the folks at ORCA Coolers saw an opportunity to do something about it. So this year, the Nashville-based rotomolded cooler maker launched the LiddUp cooler. With four AA batteries, the cooler’s built-in LEDs automatically illuminate the interior when you open the lid.

We tested the LiddUp on road and camping trips to see if it’s a gimmick or a truly “bright” idea. 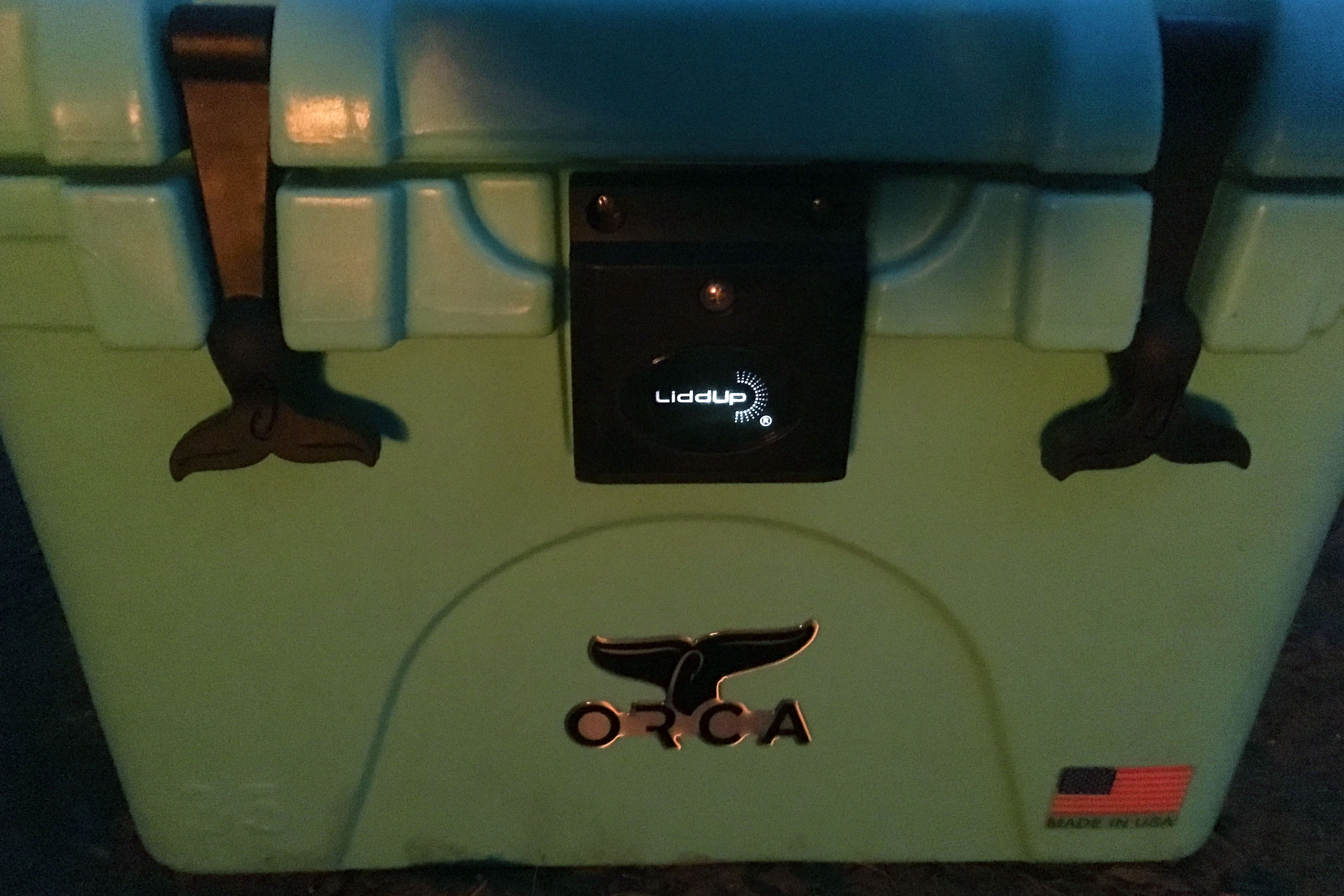 In short: Rotomolded cooler fans will appreciate the LiddUp’s added lumens during twilight outings. It looks, weighs, and functions like ORCA’s other coolers. But the built-in LED strip adds enough convenience to make it a smart add-on that’s well worth the money.

The most important note about the ORCA LiddUp is that despite the added tech, it’s still a premium rotomolded cooler. It has all the performance and functionality users expect from ORCA is in this cooler.

ORCA’s trademark tailfin rubber T-latches secure the lid and extendable nylon handles provide forgiving handholds when carrying alone or with two people. The LiddUp is ORCA’s only 35-quart option in a cooler stable that ranges from 20 to 140 quarts.

“We heard a need from our customers for a cooler size in between our 26-quart and 40-quart,” said ORCA co-founder and CEO Cliff Walker. “We listened, and developed the 35-quart size we feel is perfect for something like tailgating with a large group, but small enough that it’s easy to carry and transport.” 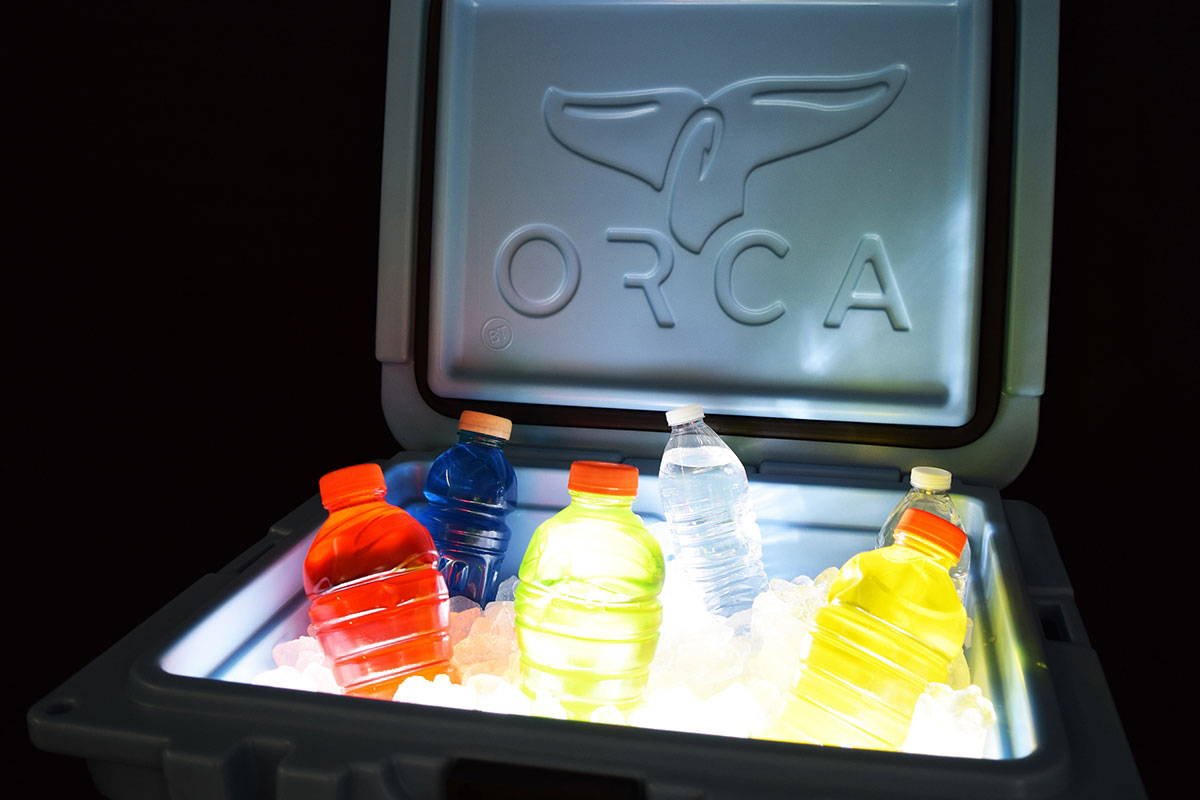 Like all ORCA products, the LiddUp comes in a variety of colors — like grey, tan, seafoam, and others — now expected in the rotomolded market. And like its roto-cousins, it has a threaded drain plug.

It’s important to note that the LiddUp technology isn’t proprietary to ORCA, it’s also used in Igloo coolers. But to date, ORCA is the only rotomolded cooler with the built-in LiddUp light strip. The system runs on 4 AA batteries that power the LEDS, mounted inside the front wall of the cooler. The lights activate automatically when the lid is raised and turn off when it’s closed.

I used the ORCA LiddUp for a few months this summer and into the autumn. It traveled with me on two road trips from Colorado to Minnesota (and back) with snacks and sodas packed inside. I also hauled the cooler to a few car camping weekends, loaded with beer and ice. 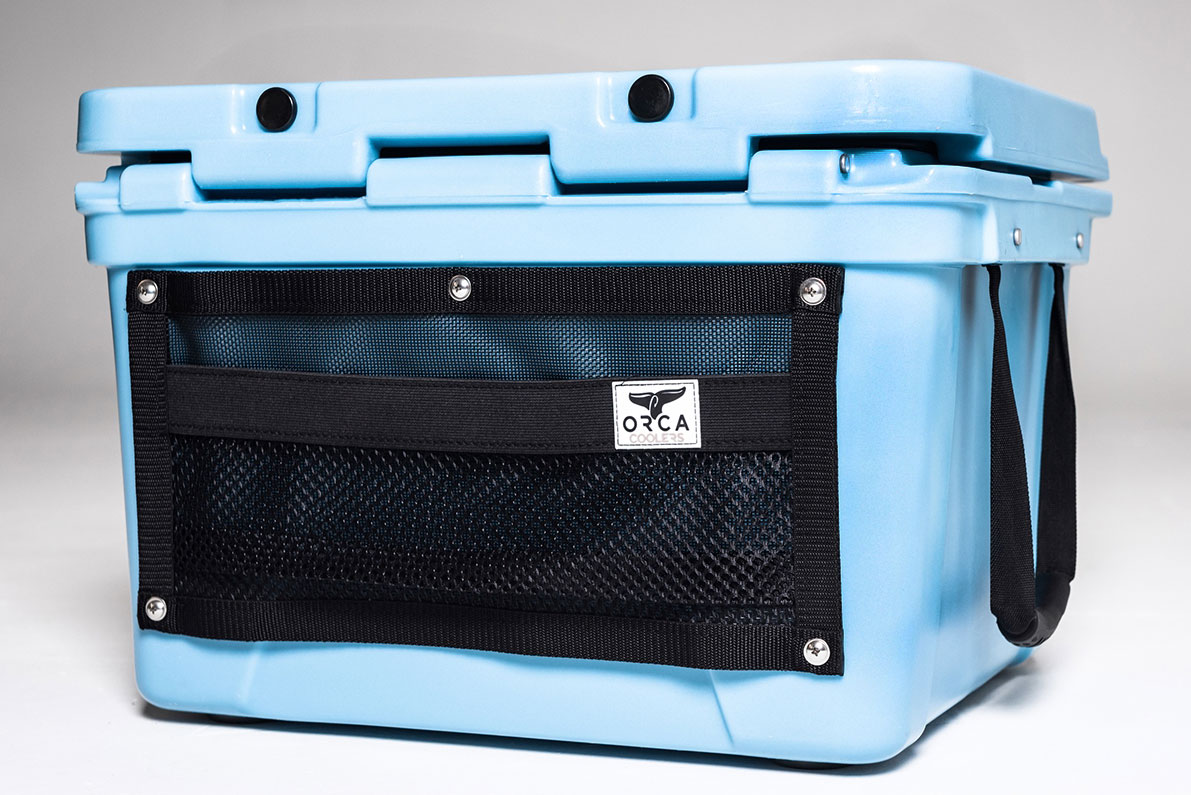 As noted above, the first thing I noticed was the familiar heft and solidity one expects from a high-end, rotomolded cooler. I did not perform a full ice-retention test, but I did find with normal use, ice packed in on a Friday remained on Monday morning when my outing concluded. On camping trips, the cooler sat outside in temps between 30-degree overnight lows to 90-degree daytime highs.

Basically, on the cooler side the LiddUp performed as well as any similar product I’ve tried. And it’s certified bear resistant. But the real test was the LiddUp technology itself. I wanted to know how easy it was to use and how useful.

To power the LiddUp, you’ll need to install 4 AA batteries. This is a standard installation like any other battery-powered device. Access the front battery panel — the box marked “LiddUp” — by removing a single screw. Once the batteries are installed, the light works automatically, illuminating when you raise the lid and shutting off when it’s closed. 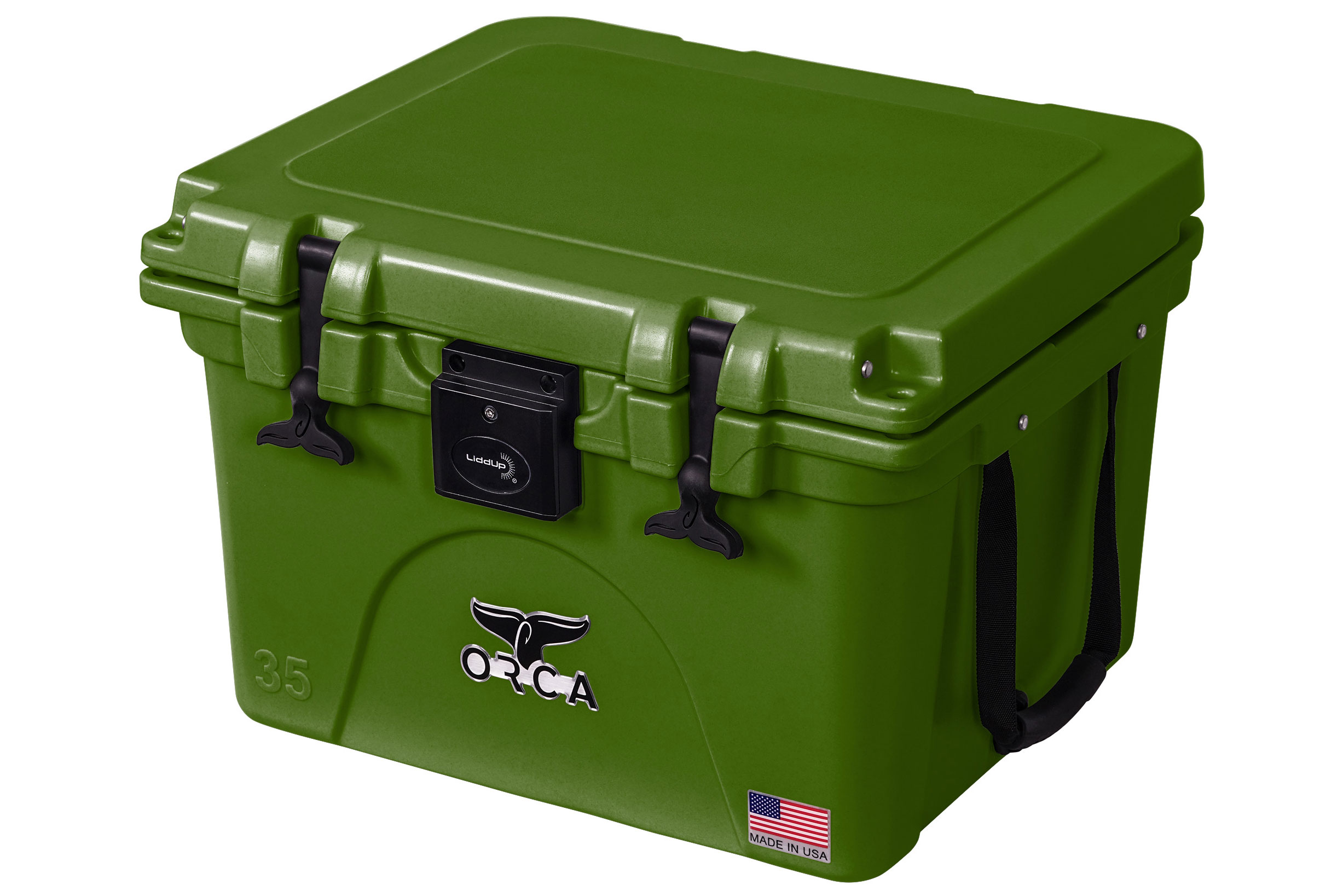 While the lights themselves definitely add convenience to the cooler, it’s not a total problem-solver. The lights run just underneath the lid and shine down — this helps illuminate the top of your cooler items, but it won’t penetrate a mound of ice. For that, you’ll still need to rummage a bit.

But the lights make it so you’re not rummaging blindly and can quickly find what you’re looking for (if someone else didn’t drink it). 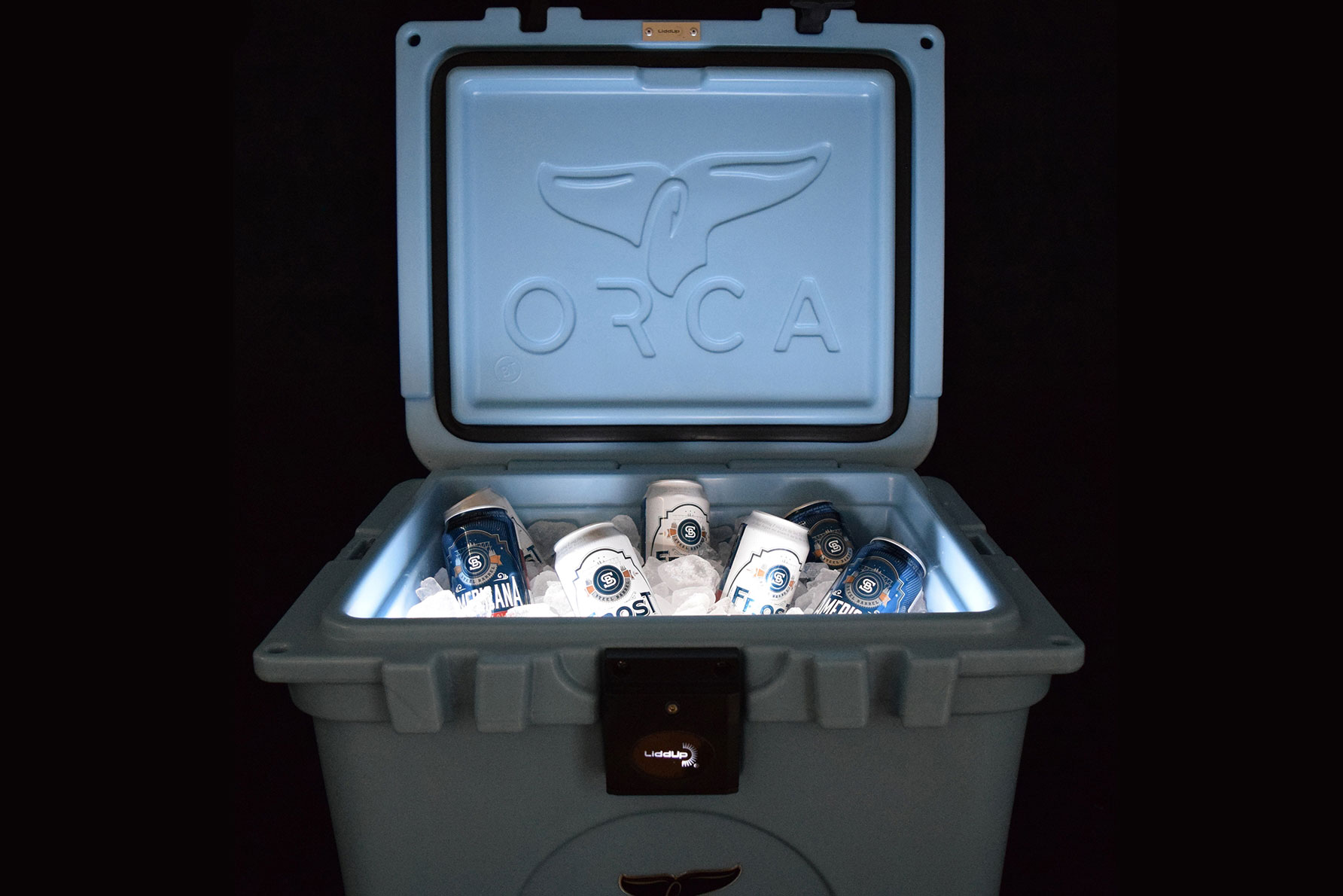 The only other downside I found is common to all rotomolded coolers. ORCA makes its name with its color variety and custom design cooler options. This makes the coolers a great option for tailgaters, but those who take these coolers into the woods will quickly dirty up their fancy-pants beer carrier.

In all, though, the LiddUp seems like a solid innovation to one of the industry’s most boutique products — the rotomolded cooler. It doesn’t interfere with the cooler’s main function, keeping things cold, and it remedies an annoyance most people have faced.

Best of all, the LiddUp tech doesn’t adversely impact the cooler’s capacity or weight. It does add to the price, however. The ORCA LiddUp runs $300, about $50 more expensive than its main competitor’s same-size offering. Plus, ORCA coolers are made in the U.S., which is a big purchase consideration for some.

But if you plan to drink some cold ones after dark even a few times, the ORCA LiddUp’s automatic lights will definitely prove handy.