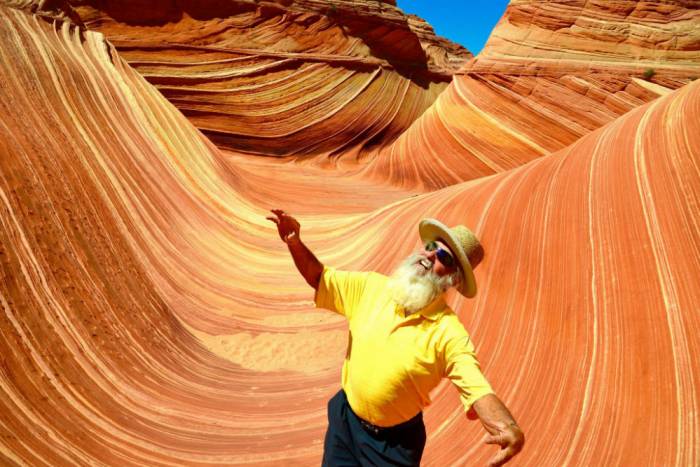 Sanders on one of his many adventures, at The Wave-Coyote Butte in Utah

In 2015, Dale Sanders, known by followers as the Greybeard Adventurer, became the oldest person to paddle the entire length of the Mississippi at 80. A career adventurer, he’s now planning to hike the entire Appalachian Trail, some 2,200 miles, and claim another title.

I spoke with Sanders on the phone to hear how and why he is able to notch these expeditions – that few people of any age ever accomplish – into his belt. What I got was an easy, meandering conversation that felt more like a story than an interview – marked with the kind of rumbling laughter that comes from a lifetime of adventure.

By March of 2017, Dale will be on the back end of 81 years old (82 in June) and in place to set the record as oldest person to complete the Appalachian Trail – end to end – in a single season.

“The current record is 81 years old,” he told me. “And they gave that fella’ a bronze plaque. In all honesty, that’s what I’m doin’ it for – I want that plaque.”

Sanders is referring to Lee Berry, who set the current record in 2004 at age 81. For Sanders to make history – again – he will need to begin his trip “as soon as they open that trail – as early in March as they’ll let me.”

Sanders expects the trip to take six months, averaging about 10 miles per day. He has no doubt he will pull it off, barring injury or sickness – which, he tells me, are the only things your can’t control that become a problem with age.

“If I don’t fall down or fall ill, I’m going to do it. That’s the one thing about me – when I set my mind to something, I’m going to see it through.”

Support On The Trail

While his last adventure along the Mississippi was met with both media and sponsor acclaim – Spot GPS, Arc’teryx, and Wenonah Canoes provided product support, and the entire journey will be featured in a documentary coming out this fall – his upcoming AT trip has received little attention. At present, he has no sponsors signed on.

“I’m known in the paddling community,” said Sanders, who volunteered with the Wolf River Conservancy as a guide before becoming its director of outreach until 2013. “There were River Angels that helped me along the way last year. I know there are Trail Angels along the [AT], but I don’t think they know me in the hiking community.”

What he needs, he says, are people to sign up and walk parts of the route with him, send food or supplies, or simply spread the word.

For now, Sanders plans to procure, pack, and ship his own provisions to drop points along the trail in the same way most through-hikers undertake the long walk.

Born in 1935, Sanders began his career in parks and recreation as a lifeguard, certifying others in first aid through the American Red Cross program. By the time he retired nearly six decades later, he had added U.S. Navy hard hat deep sea diver, commercial SCUBA instructor, and professional diving instructor to his resume.

Since his retirement, Sanders has been just as active. In addition to paddling the length of the Mississippi in 80 days, Sanders proceeded to pursue his master’s degree, which he received, hiked rim to rim – north to south – across the Grand Canyon, and this year is planning on starting one leg of a multi year bicycle trip from the northern tip of Minnesota to Key West, Fla. – no big deal!

His upcoming trek of the Appalachian Trail will keep Sanders away from home twice as long as his trip down the Mississippi.

“That will be the hardest part of the whole thing,” he said. “I won’t see my dog Molly once.”

If you want to support Sanders’s upcoming Appalachian Trail trek, contact him through his website – donations and company are appreciated.