Public service is venerated in many ways. But it’s not often that we’re able to recognize the efforts of our four-legged friends who have full-time professional gigs serving the American public.

Jessi was 7 years old when she began working for the Forest Service and 28 years old when she retired. For most federal employees, it’s an unlikely age span for a gig. But Jessi is a mule. And for 21 years, she packed lumber, trail-building supplies, crosscut saws, and even explosives into the Ashley National Forest for federal packer Ken Reed.

I was in elementary school when Jessi was born and in my junior year of high school when she first began packing for the Forest Service. I was likely doodling horses in the margins of my school notes at both times in my life. But now, in my 30s, our lives have converged.

Jessi is my first mule. And in Ashley National Forest’s recent Facebook post celebrating her retirement, thousands have joined in on wishing Jessi well in her hopefully long and healthy retirement.

A Quick History of Mules, Horses, and the Forest Service

When the United States Forest Service first formed in 1905, the majority of its employees were four-legged. Thousands of horses and mules were drafted into service, where they were used for trail-building, pack supply operations, wildfire assistance, and more.

Over 115 years, not much has changed for horses and mules in the Forest Service. They continue to pack necessities and aid in trail-building and maintenance around the country. In fact, if you’ve ever hiked, cross-country skied, mountain biked, or backpacked in our National Forests and Wilderness Areas, you’re likely on trails built and maintained by virtue of these animals.

Mules in particular are near-perfect pack animals for the long term. A cross between a horse and a donkey, mules exemplify what scientists call “hybrid vigor.” Mules tend to be healthier and stronger than their equine brethren, and they often outlive most horses by nearly a decade. And keeping both horses and mules in shape over a lifetime — as with humans — can substantially prolong their productive years.

As a result, healthy mules can be ridden and packed into their mid-30s, and they occasionally live into their early 40s. In 2019, the world’s oldest living mule died at a whopping 56 years of age.

Jessi was likely 7 or 8 when she was purchased from a local outfitter by the USFS in 1999. In 2001, federal packer Ken Reed ended up with her in his string after a coworker wasn’t getting along with her. Her name — then Jello (an unfortunately insulting name for a hoofed animal) — was quickly changed to Jessi.

Jessi proved her worth from then on. Over the years, Jessi packed both on her own and as part of tandem teams carrying strange loads. She’s packed everything from saws to explosives due to her reliable and steady nature.

Reed, Jessi, and their other four-legged partners packed folks out of areas under the threat of wildfires, brought supplies to hard-working trail crews, and brought in lumber for bridges and trail reinforcement.

“In Jessi’s 21 years of service here on the Ashley National Forest, she has packed approximately 18,000 pounds. She’s been shod over 70 times and that translates to wearing out over 300 mule shoes in the High Uintas and several trips to the San Juans,” Reed said. “She has always been my ‘go-to’ mule for packing clinics, transporting crosscut saws, explosives, and sensitive equipment.”

Ever a mule, Reed told me that Jessi is known to untie herself and her friends if left to her own devices. She has her own particular sense of humor about things, and her distinct personality made her a fair and trusted teacher of younger mules in the string.

Out of curiosity, I took a class called Packing and Outfitting through Colorado State University in 2007. A lifelong equestrian, it was there I was first introduced to mules and the tradition of backcountry packing. The long-eared saints that stood patiently every Tuesday evening in CSU’s Equine Center were steady, kind, and silly. I immediately fell in love.

Years later, my journey into both backpacking and hunting the hills of Montana had me jonesing for long-eared company to help carry the load. I’d run into mules in the backcountry and pet their noses; I’d look at my horse and imagine that her ears might be a bit longer. I was simply doe-eyed for mules.

In the last year or so, Ken and I became friends on Instagram through his account @govpacker. At one point, I asked if he’d be retiring any of his mules that could still do some light work. He said he had one in particular that might be a good option. I began boning up on my packing skills and signed up for a weekend class with the Royal Tine Guide School, who provided an excellent refresher course on how to safely pack horses and mules.

And last weekend, the time had finally come. I drove from Montana to Utah with my empty two-horse trailer, and I came back with Jessi in tow. 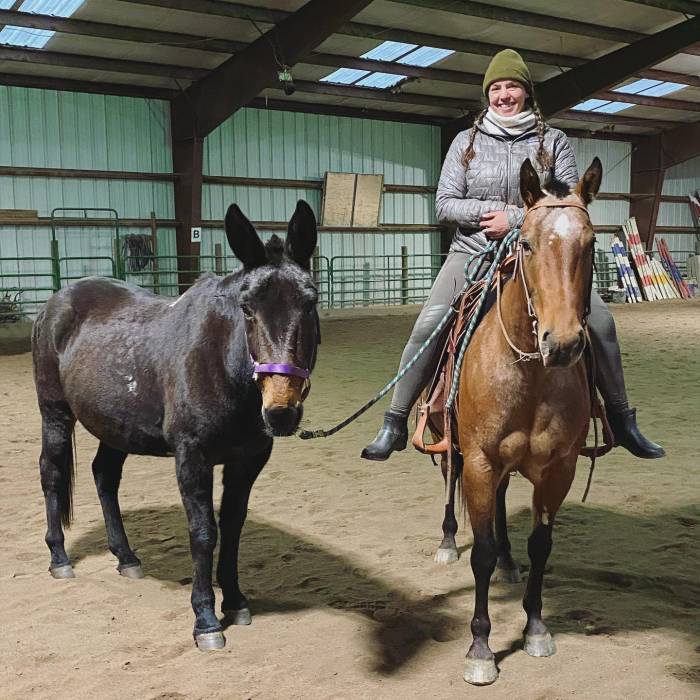 I brought Jessi home to the Kissock Horse Center in Butte, Montana, where I keep my young horse, Bess. It’s about 10 minutes from my place in town. And it’s full of the kind of people you know will keep a loving and watchful eye on your critters. More specifically, it’s a barn that’s overrun with horse-crazy little kids who likely doodle horses in the margins — like I did as a young’un.

She’s already an ambassador for her kind at the barn as well, being the only mule in a barn full of her shorter-eared counterparts.

Little girls run their hands over her giant ears, pet her soft nose, and tell her how beautiful she is. My 5-year-old nephew introduces her as his “first mule.” I brush her and pull treats out of my pockets at every given opportunity.

Jessi might not be a whippersnapper anymore, but she still did 300 miles of legitimate packing over the summer with ease. Her golden years could potentially go on for 10 more and, if luck and good health hold, many adventures await.

I’m excited to have a sassy, long-eared packing partner to help with backcountry camps and the occasional big game hunt. She’ll certainly be spoiled with carrying lightweight packing gear and some of the fun things I’m able to test for my job as the Hunt & Fish Editor here at GearJunkie.

Since last week, more than 1,400 people have shared in celebrating Jessi’s retirement from the Forest Service. I, too, celebrate our new life together. Beyond that, I’m grateful for the responsibility to see this gal through her golden years.

When it’s time to hang up her pack saddle for good, I’ll break open a bottle of champagne and a bag of carrots. She’s certainly earned it.

Up Next: Yellowstone Treasure Hunter Indicted for Digging Up Graves