These Vogue-esque photographs started as a drunk stunt but grew into something else along the 2,653-mile Pacific Crest Trail.

Tommy Corey is primarily a wedding and portrait photographer. But when he decided to shake up his 30-something life with a 6-month thru-hike on the Pacific Crest Trail (PCT), his artistry took on new meaning.

His photos of dirty hikers in some beautifully staged yet stinky states made a splash on Instagram, doubling Corey’s following. News outlets have also nodded to the novel art. And now Corey is being tapped by a major outdoor brand for his clever portraiture.

The project appears to make both outdoor enthusiasts and fashion folks happy, even from afar. And it’s easy to see why. 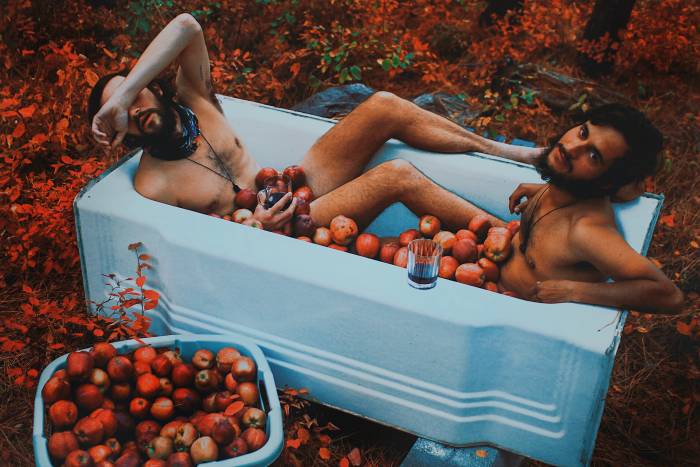 The PCT runs 2,653 miles from Mexico to Canada. Corey’s brother did it a few years ago. “The entire family thought he was nuts,” Corey told us. That was until he got the bug to get off the grid, too. Corey first tried to complete the trail in 2017 but bailed 900 miles in, feeling frustrated and alone.

But a year later he finished the whole hike solo through a new lens: his camera. Staging low-brow, high-fashion silliness on the trail helped Corey make friends. But he said he also learned how to be OK alone for the first time in his life.

“People would be like, ‘Twerk [Corey’s trail name] wants another photo.’ So they would stop on the trail and start taking off their packs,” he said. “Other times, with closer trail friends, they would roll their eyes.”

But half-naked men, covered in a thick layer of dirt, willingly climbed into an old bathtub filled with freshly fallen apples. One dreadlocked woman struck a provocative pose submerged in water, even though it was just a way to get clean on the trail.

Hikers old and young, of various shapes and sizes, agreed to be snapped in raw states. They smelled like shit and sweat, Corey said.

“But there was laughing, so much laughing, behind every photo,” he said. And that makes sense. “The project started as a joke when we were drunk,” he said of a night squeezed in a tiny Airbnb piled with people’s hiking gear. He and a few thru-hikers shared a night in town well over 300 miles into the trail. And the project took off from there.

“But the further and further I went, I knew there was this bigger meaning to it.”

And by that, Corey means what he exposed through his PCT portraits: intense vulnerability. He realized along the way this was the universal language among long-distance hikers. And perhaps that’s why the images gained such a following on Instagram.

“No one is working or stressed. Our biggest worry is where next water will come from,” he said. “When everyone is dirty and no one cares, we can express our inner beauty.”

Since he first started snapping people’s portraits at age 12, Corey said he’s always preferred photographing outdoors. The way the sun hit or hid has always been his inspiration.

Not surprisingly, people sent messages from around the world about the PCT images that Corey has put into a book: “Hiker Trash Vogue,” or the “HTV Book.” Some were inspired to follow a passion for photography. Others were ready to try a thru-hike, seeing that there would certainly be friends over the long haul.

Either way, the reaction to the witty project is compelling. And for those who’d like to peruse the hiker chic forever from the convenience of a coffee table, the “Hiker Trash Vogue” book is available through Corey’s website for $115.

“Hiker Trash Vogue” should ship by mid-March. And in the meantime, watch for Corey’s work with at least one major outdoor brand (who must remain anonymous, per his request). Turns out that all that time OOO paid off in more than one way.