Looking for a waterfowl dog? These are the best dog breeds for hunting ducks and geese based on quantifiable performance in the field.

How does one judge popularity? Especially among canine owners who are all fiercely loyal to their breed? I opted to take a more quantifiable approach.

Thirty years ago, the North American Hunting Retriever Association (NAHRA) was spawned as a more hunting-friendly format for field trials, where actual hunting scenarios were often not represented. Hunters wanted standards to measure their canines against as well as motivation to train all year. Following the inception of the NAHRA, the American Kennel Club and other organizations followed its lead.

Today, there are a handful of hunt test organizations. And in many regions of the country, one or more series are available to hunting dog owners who want to compete, or just seek mentorship in helping their best furry friend be the best possible hunting companion.

A Database of Dogs

Throughout that time, the NAHRA has maintained a database of canines that have earned titles. At the most basic level, canines for most hunt test organizations have to complete five retrieves, comprised of water and land marks.

By looking at cumulative NAHRA scores over 3 decades, we have metrics at what are not necessarily the most “popular,” but rather the most “effective” dogs for waterfowl hunting. And I’m using “effective” as a word that describes trainability as well as consistency of performance. In this case, we have measured those traits across breeds over 30 years. The titles earned are metrics of efficiency.

While most retriever hunt tests have an upland component, the tests are heavily weighted toward waterfowl hunting. This provides an awesome, objective data set for those looking for a waterfowl hunting canine. 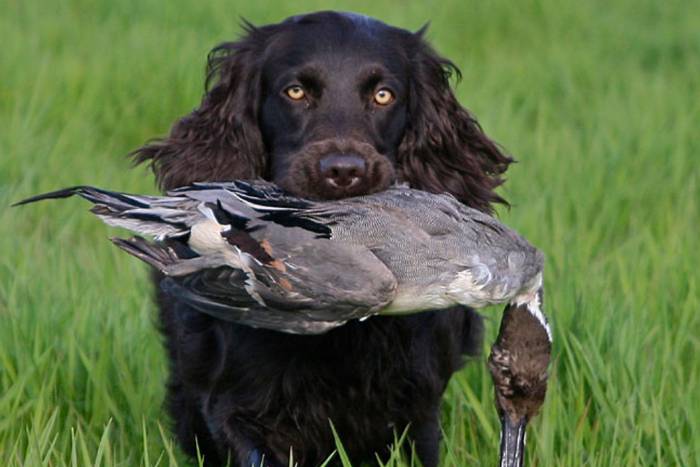 “Working retriever” is not a colloquial designation but an earned title. As per the NAHRA rulebook, “Intermediate dogs can complete double marked retrieves and perform blind retrieves on land and water. They can search and locate game in the field and trail and recover a crippled bird.

“At a level just below senior, they exhibit a solid obedience foundation. They’ve also shown they have what it takes to become a proficient hunting dog.”

A “grand master hunter” is a canine that has consistently excelled at many senior tests, often over several years.

As per the NAHRA rulebook, “The Senior dog is the finished hunting retriever that any hunter would be proud to own and take into the field or marsh. Their levels of training and skill are superior. The NAHRA Senior dog can be taken afield anywhere and perform consistently.

“Complex triple marked retrieves and blind retrieves are completed with precision and polish. At this level, judges can combine any of the different tests in very complex hunting situations.”

When used properly, electronic collars can be an invaluable and humane tool for training your pup. Here's rundown of some of our top picks. Read more…

The Value of Hard Data

As previously mentioned, we are all fiercely loyal to our own breeds. We all love our best furry friends, and we all have instances of where a mutt may have proved to possess greater sensibility than a purebred. However, data over a 3-decade period is hard to argue with.

For that person looking for the most trainable, eager-to-please canine, it’s hard to argue with a labrador’s stats. From a level that represents a well-trained waterfowl dog to the elite levels, labs dominate.

Despite the many breeders specializing in companion canines and pets, several responsible breeders throughout the world keep the core working dog stock intact. These bloodlines point to a performance standard, not an aesthetic standard. The same can’t be said of many, many other breeds.

As a hunt test judge, I’ve seen other breeds do stupendous things in competition. So much depends on that canine’s ancestry, their training, and their relationship with the handler. However, day in and day out, labs bring home the bacon.

Up Next: Double-Duty Hunting Clothes: From City to Backcountry