Basted with fat and capped with crispy skin, a pan-fried duck breast is as good as it gets. Let’s see how easy it is to breast a duck (and most other birds).

My mouth waters when I spot a flock of ducks roosting on the water. You may think that’s strange, but there’s simply no substitute for a perfectly cooked duck breast. And that’s what I think of when I see plump birds bobbing in the waves.

Here’s my take on how to take apart most of the birds you’ll hunt this fall.

A razor-sharp knife is essential — a keen edge is safer to use and makes short work of breaking down a bird. The knife I use is a fixed-blade Browning (model 569) Bird and Trout knife with a 4 1/4-inch blade.

I love the shape and length of the blade for breasting birds. It holds an edge long enough to process a limit of ducks without noticing a loss in performance.

The Browning 569 is my go-to knife for cleaning fowl and small game — a testament to its usefulness. The knife is several years old, and it’s no longer in production.

A similar bird and trout knife by Browning — the Browning Featherweight Classic — is new for 2019. It has a shorter blade (3 1/8 inches) but similar shape and ergonomics.

I also use a small handheld propane torch or disposable lighter to singe hair and fine feathers off of the breast. A small bucket with cold water for soaking bloody meat, a cutting board, and a garbage bag round out the gear list.

For additional processing like clipping wingtips or cutting ribs, I add poultry shears to my bird-butchering kit. 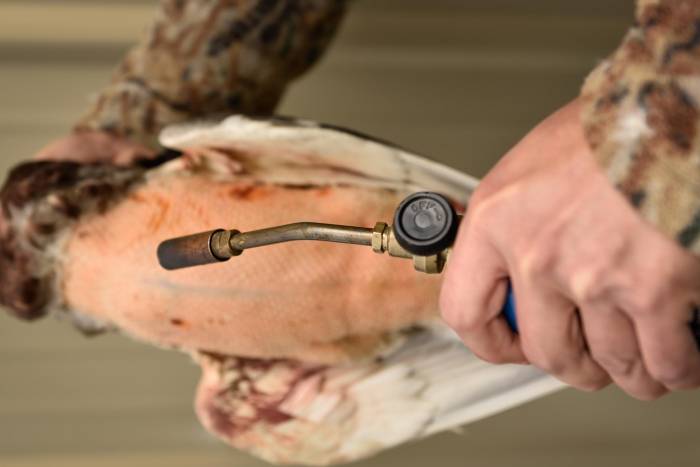 I inspect each bird before breasting. Early in the season, ducks and geese may have many pinfeathers (aka blood feathers), making them difficult if not impossible to pluck cleanly.

Tiny pinfeathers cling tight under the skin. To avoid tainting the flavor of the skin, you must remove these. Late-season birds with fully formed feathers are a joy to pluck. Sometimes while waiting in the field, I’ll dry pluck the birds in anticipation of breasting them at home. 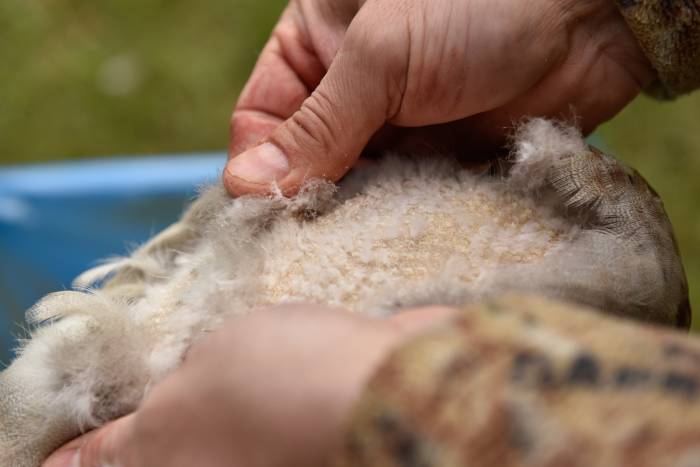 To check if a bird has pinfeathers, pull a few handfuls of down from the breast to expose a patch of skin. Birds with relatively few (or no) pinfeathers are ideal candidates for plucking.

On the other hand, early-season and badly shot-up birds are best skinned. But it’s worth it to pluck the quality birds and use the skinned birds in recipes that don’t rely on the fat and skin to add flavor.

I dry pluck birds by grasping a small bunch of feathers between my thumb and first two fingers and pulling against the grain. I’m extra careful plucking around shot holes to prevent tearing the skin.

Remove the breasts one at a time, starting at the keel. Carefully cut down — angling the blade towards the boney keel to remove all the meat — until you reach the breastbone. This first series of cuts runs from the bottom of the breast near the duck’s tail and up to the wishbone near its head. 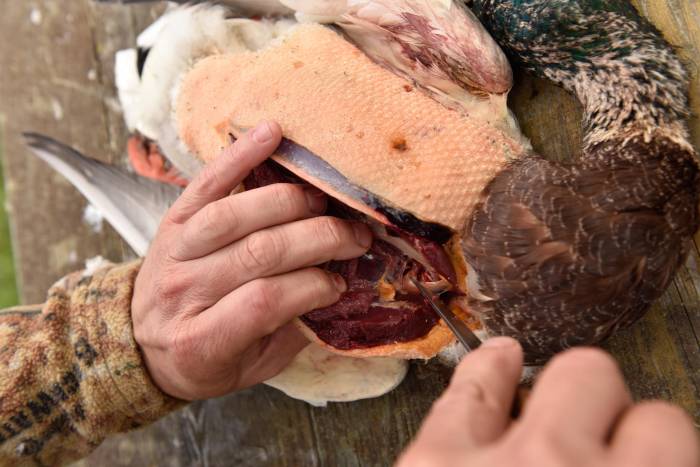 Slide the point of your knife across the bone to cut the breast where it attaches to the wishbone. Now, use your fingers to pull the meat away from the keel to allow easier access.

Then, using the tip of the knife, continue to free the meat from the breastbone and ribs until there’s enough room to use the whole blade, laying it flat against the breastbone. Follow the bone until the breast is free. Finally, slice through the skin along the flank. 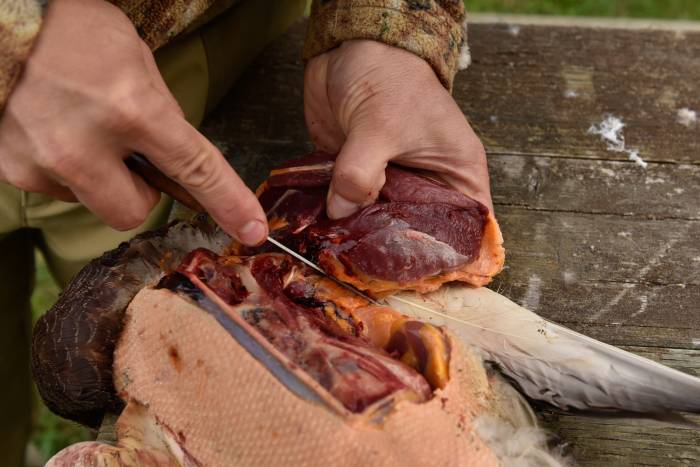 Mirror this process on the opposite side to remove the other half.

Remove the tenders from the breast by pulling or cutting. In our house, the tenders are seared alongside the breasts and offered up as tasty “samples” to hungry boys awaiting the main course. 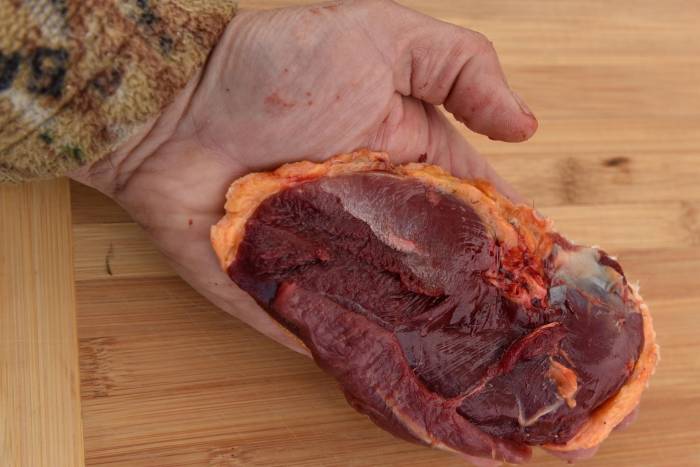 If the breasts have shot holes, take the time to dig out embedded feathers. Soaking the meat in cold water loosens clotted blood before freezing.

Depending on where you hunt, game laws often demand evidence of species, which requires leaving a wing attached for transport. In this case, pluck the bird’s breast but leave the meat on the breastbone.

Using poultry shears, cut from the back of the ribs (towards the tail) under the breast and up to the wing. On one side, cut under the wing to leave it attached to the breastbone; on the opposite side, remove the wing by clipping through the joint near the body and cut the ribs down the far side.

The breasts — still on the bone — are now free from the body and legal to transport. At home, remove the breasts using the same process as if they were still attached to the bird.

We’ve covered breasting the bird for the prime cuts of meat, but don’t overlook the thighs, legs, and wing drumettes. These parts are either plucked or skinned and removed.

When to Breast Birds 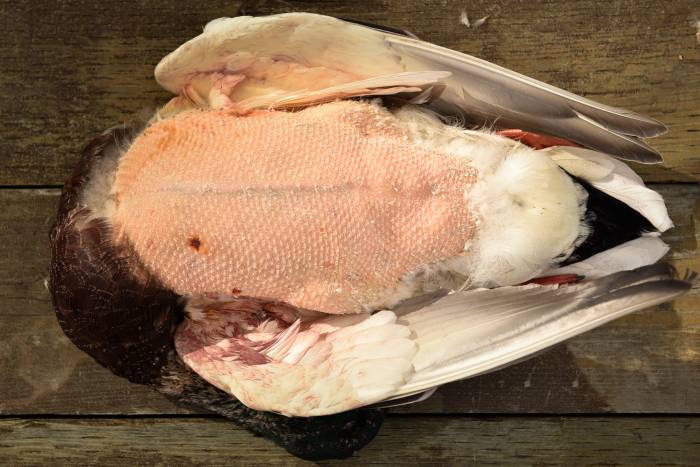 I breast a lot of my ducks, geese, and other game birds like pheasants. Breasting birds is the quickest method of breaking down a wild bird, and meat is suitable for a myriad of recipes.

Butchering birds and freezing them in meal-sized portions is handy when it comes to menu planning later. In conservation hunts for snow geese, I skin and breast large numbers of birds, turning them into sausage.

A big treat each year is brined and smoked duck, which I do with whole birds. For this recipe, I select only the finest birds — those without damaged breast meat. I can breast and clean damaged birds while saving the pristine ones for this fine table fare. 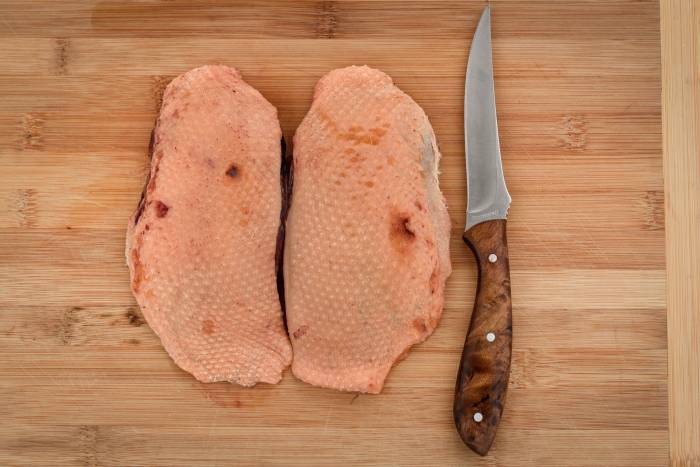 I’ve shared my method of plucking and breasting birds, and this method works well for me. Others remove feathers with wax or remove the parts in a different order or method. There’s no right or wrong if the end product is what you desire. Prepared right, wild birds far surpass their farm-raised cousins in flavor.

The next time you’re hunting ducks, pheasants, doves, or any other birds, consider breasting. It’s easy to learn and the fastest way of butchering fine cuts to be used in your favorite recipes; the lesser parts are best prepared in their own signature dishes.

Up Next: Backcountry Fuel Box Review: Change Up Your Outdoor Menu