Home » Outdoor » Hunt / Fish » Pheasant Hunting: How to Get Started

Pheasant hunting is one of the most fun ways to enjoy the fall fields. And while chasing wily roosters takes a little know-how, it’s one of the better introductions to hunting for beginners.

“It’s Christmas morning!” sings one of my buddies as he sits up in the squeaky bed of a cheap motel on the Great Plains. But there’s no tree or presents on the floor. Instead, two dogs burst from the corner and launch onto the bed. I roll over and look at my phone — 4:30 a.m.

I rub the sleep from my eyes and smile. “Better than Christmas morning,” I reply. And for pheasant hunters, the opening day of upland bird season really is one of our favorite days of the year.

If you’ve yet to experience the excitement of the flush, read on. Hunting ring-necked pheasants is downright addictive. Here are my pheasant hunting tips to get you started, regardless of your level of hunting experience.

How to Pheasant Hunt

I’m going to assume you already have your hunter’s safety card as well as a hunting license for your appropriate state, be it an upland-specific or small-game license. If not, take a breath and go read “How to Start Hunting as an Adult.” Gotta get your credentials before you go any further!

OK, now that that’s taken care of, we can get into the goods.

The first place to start locating birds is at a sporting shop or your computer because that’s where you’ll find the land.

Each state has different regulations for public land, but almost all states with huntable pheasant populations have a system to allow access to hunt game birds on farmland.

In my home state of Colorado, for example, hunters can access thousands of acres of otherwise private land through the Conservation Reserve Program. And you find that land through the state’s Walk-In Atlas, which you can get in print or online. Treating these opportunities with respect is key to keeping lands open, so be sure to treat it like it’s your own.

You can expect to find a similar map for every state in the great plains. Call the fish and game office closest to your intended bird hunting point for more info. That is your launching point.

This is a baseline for every kind of hunting, but it’s worth a reminder. Check the regulations of the state you hunt before hitting the field. Pheasant hunting often has some quirky rules.

For example, some states, like South Dakota, do not allow hunting before 10 a.m. Others allow shooting as early as a half hour before sunrise. Be sure to verify shooting hours, bag limits, and other legalities before hitting the field.

Most states only allow you to shoot male birds, or “roosters,” which are easy to distinguish from female “hens.” Roosters are bright and colorful with a long tail, and hens are smaller and tan or brown. Game farms and some states allow you to harvest hens. Just know the rules where you’re hunting.

Pheasant Hunting Without a Dog

Now that you’re in the field, if you’re a new hunter, there’s a fair chance you won’t have a dog. This is tough but not impossible.

If you don’t have dogs, having multiple hunters helps. Focus on small areas that will likely hold birds. Thick cover, small stands of trees, or strips of fencerows between farm fields are a good place to start.

Spread out about 20 yards from the other hunters in your group and walk in a line across these fields. You hope to flush birds within shooting range, less than about 40 yards (closer is better).

While birds can flush at any time, be especially alert as you get to the end of fields and push toward natural obstacles. Pheasants often prefer to run instead of flying, so they will often run to the end of a field and then wait until you get close to flush.

For this reason, if you have enough hunters, consider putting one hunter at the end of the field as a blocker. This person may get shots at birds that flush out of range of the walking hunters too.

Systematically work your way through a field, noting fence lines along the way. Once you have hit all likely areas, head on back to the truck and move on to a new field.

Pheasant Hunting With a Dog 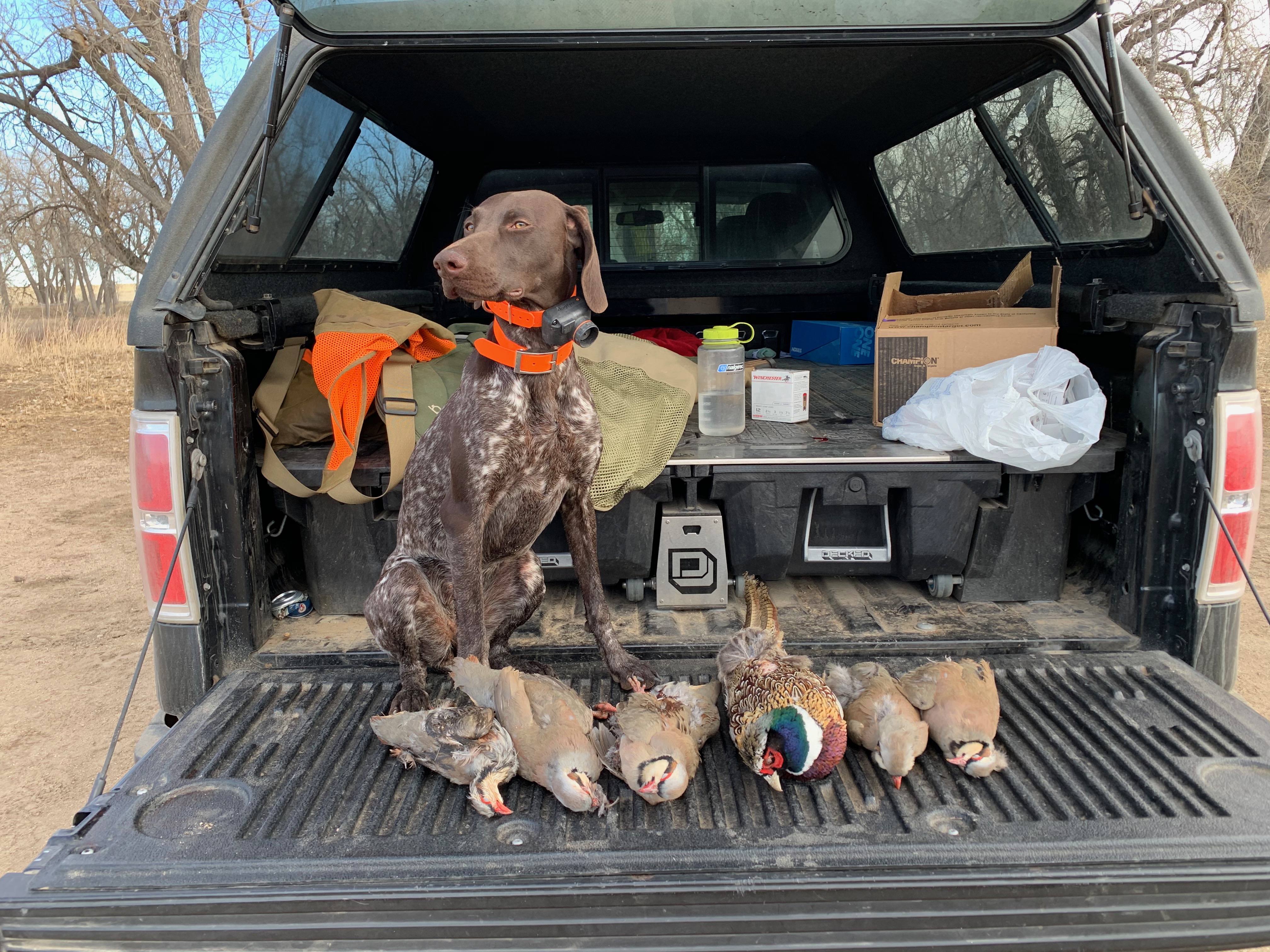 Hunting with a legitimate bird dog is incredible. It takes a lot of guesswork out of walking in the fields. For the uninitiated, a bird dog will either “flush” or “point” a bird. Some do a bit of both, and every dog has its own personality. As a new hunter, you’ll likely be hunting over someone else’s dog. And for this, I have some advice.

First of all, don’t shoot the dog. Yes, this sounds obvious. But be aware that many dogs will chase a flushed rooster like crazy. Dog trainers work to break dogs from chasing flushed birds, but dogs still often give pursuit. And they are fast! So when you swing upon a bird, make sure there isn’t a dog in hot pursuit. A good way to ensure safety is to shoot at birds only once they break the plane of the horizon.

Secondly, don’t give commands to someone else’s dog unless the dog’s human gives you the OK to do so. The owner has likely spent hundreds of hours working with the dog and teaching it to listen to them. So your random commands while the dog is working will likely not be well-received and will most likely only confuse the dog.

Should I Bring My Dog Hunting?

As a new hunter, you may be tempted to leave un-trained Fido at home. But if your dog is well-behaved and responds to commands (primarily “come ” or “here”), it’s worth trying even a non-hunt-trained dog in the field. That’s because, thanks to their senses of smell and curiosity, almost any dog is better than no dog as long as it stays close to you, the hunter.

Of course, if your dog has a propensity to run off and not listen to commands, you may want to leave them on the couch.

What Shotgun Should I Use to Hunt Pheasants?

People have hunted shotguns with every gauge of shotgun under the sun. But for tough, wild birds, it’s pretty hard to beat a 12-gauge loaded with 5-shot. Twenty-gauge shotguns are also entirely capable pheasant guns and often preferred by experts who cover big miles.

As far as action, semiautomatic shotguns and over-under double-barrels are the most popular shotguns in the field. But really, any shotgun action will work. Pump-actions are very effective and reliable. Even a single-shot will do the trick, although wild pheasants are tough as nails and it’s really nice to have a follow-up shot.

Whatever shotgun you chose, be sure to practice with it at the range before you hit the field. Wild pheasants are fast, unpredictable, and — again — did we mention tough?

Finding Wounded Pheasants: After the Shot

If you have a little luck and are putting in some miles in quality pheasant habitat, you’ll have the chance at a shot. Upon shooting a bird in flight, you will need to take steps to ensure you recover the bird.

First, watch the bird as it falls. Pheasants tend to glide down if you don’t connect well, so keep your eyes on the bird and the place it hits the field.

Those big crop fields don’t have a lot of landmarks, so don’t take your eyes off that spot! Walk quickly to the place where the bird hit the ground and be ready to pursue a bird on the ground. Pheasants like to run! 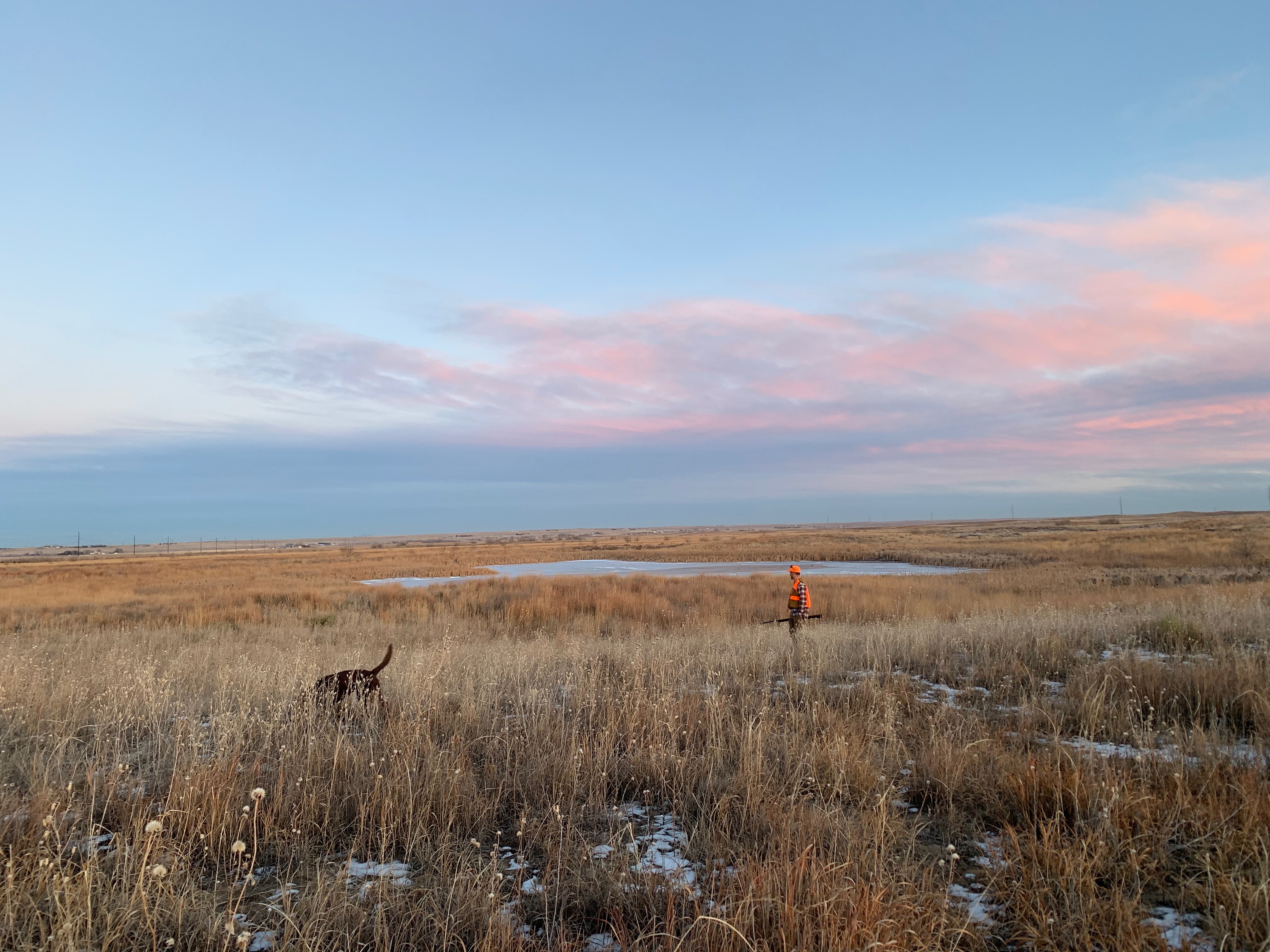 This is a time to remind yourself of safety. In the action of the shooting, did you remember to put your safety back on? Are you loaded? Watch that muzzle and beware of dogs if you’re lining up on a follow-up shot on a bird running on the ground.

With a little luck, you will walk up and find your bird crumpled on the ground. But if not, don’t give up. Look under branches or tall tufts of grass. It’s amazing how a pheasant can hide under almost nothing in the field.

If you have a dog, finding a downed bird is much easier. Just let your pooch use its nose and find the bird for you. A trained bird dog is invaluable for this task.

How to Clean a Pheasant

You finally bagged a rooster! Congrats. Now, it’s time to turn it from a dead bird into table fare. There are three main ways to clean a pheasant: plucking, skinning, and “breasting.” Let’s briefly go over each.

Plucking a pheasant is a fairly slow process. It literally involves pulling out all the feathers while retaining the skin. If you want to roast a pheasant, this is a good method, as the skin helps keep the bird from drying out when cooking.

In short, pluck the feathers from the body, thighs, and inner wing. Then, cut off the head, outer wing, and lower leg. Make a small incision under the breast on the front of the bird to remove the innards. It’s best to watch a video on this job, so here’s one below.

Now I’ll let you in on a little secret — most hunters don’t pluck pheasants. It’s way easier to skin them, and if you use them in many recipes such as slow cooker meals and casseroles, there’s no reason to retain the skin anyway.

Basically, to skin a bird, simply pull open the feathers and rip the skin. The skin should easily pull off the meat, bringing the feathers with. Use a garden sheer to snip off the wings, legs, and head. Then make an incision under the breast meat (as in the video above) to remove the guts.

Finally, breasting birds is a quick and easy job, but you lose a lot of meat. To breast out the bird, you simply pull apart the feathers at the breast, exposing the breast meat. From there, you slice out the two large pheasant breasts. This is only really an option if you’ve shot up the legs, rendering them inedible. But usually, it’s a waste of good meat and not good practice.

Well, that’s about it. You can find dozens of great pheasant recipes online, but my favorites include slow cooking and lots of cream and mushrooms.

Welcome to the world of pheasant hunting. Good luck — and yell “rooster”!

Up Next: The 4 Types of Archery Bows: Recurve, Longbow, Compound, and Crossbow

Saving…
The 4 Types of Archery Bows: Recurve, Longbow, Compound, and Crossbow
How to Fish for Lake Trout
×