Home » Outdoor » Hunt / Fish » Do It Yourself: Installing a DECKED Drawer System in Your Truck

Installing a DECKED Drawer System is way easier than it should be. And so unbelievably worth it.

I’m what you would call chaotically organized. I basically know where most things are, but it’s a hit-or-miss kind of game. And as both an outdoorswoman and a horsewoman, my truck suffers the brunt of both my chaotic organization and many hobbies.

It’s a tack room, a hunting/fishing/camping gear locker, and a dog kennel — all rolled into one. I’ve never found a system that could potentially save me from myself until DECKED came onto the scene.

Prior to getting a DECKED Drawer System for my short-bed Chevy Silverado 1500, I built my own plywood deck for a sleeping space with storage underneath. It was … shoddy. But it worked for three summers, sort of.

Mostly I shoved stuff underneath the platform only for it to get lost in the abyss. The stuff on top varied from horse grain to full coolers to dead animals. It was tough to keep clean.

And to be clear, I sleep in my rig a lot. Having a flat, clean space to curl up at the end of the day is tough when you’re rolling with a billion pieces of equipment and two dogs. I needed more.

A few coworkers have gone the DECKED route for a few years. They haven’t looked back. If you’re interested in leveling up your organizational game, come along for a first look and a DIY install.

Personally, I think the DECKED is about to solve a lot of my problems.

What Is a DECKED Drawer System? 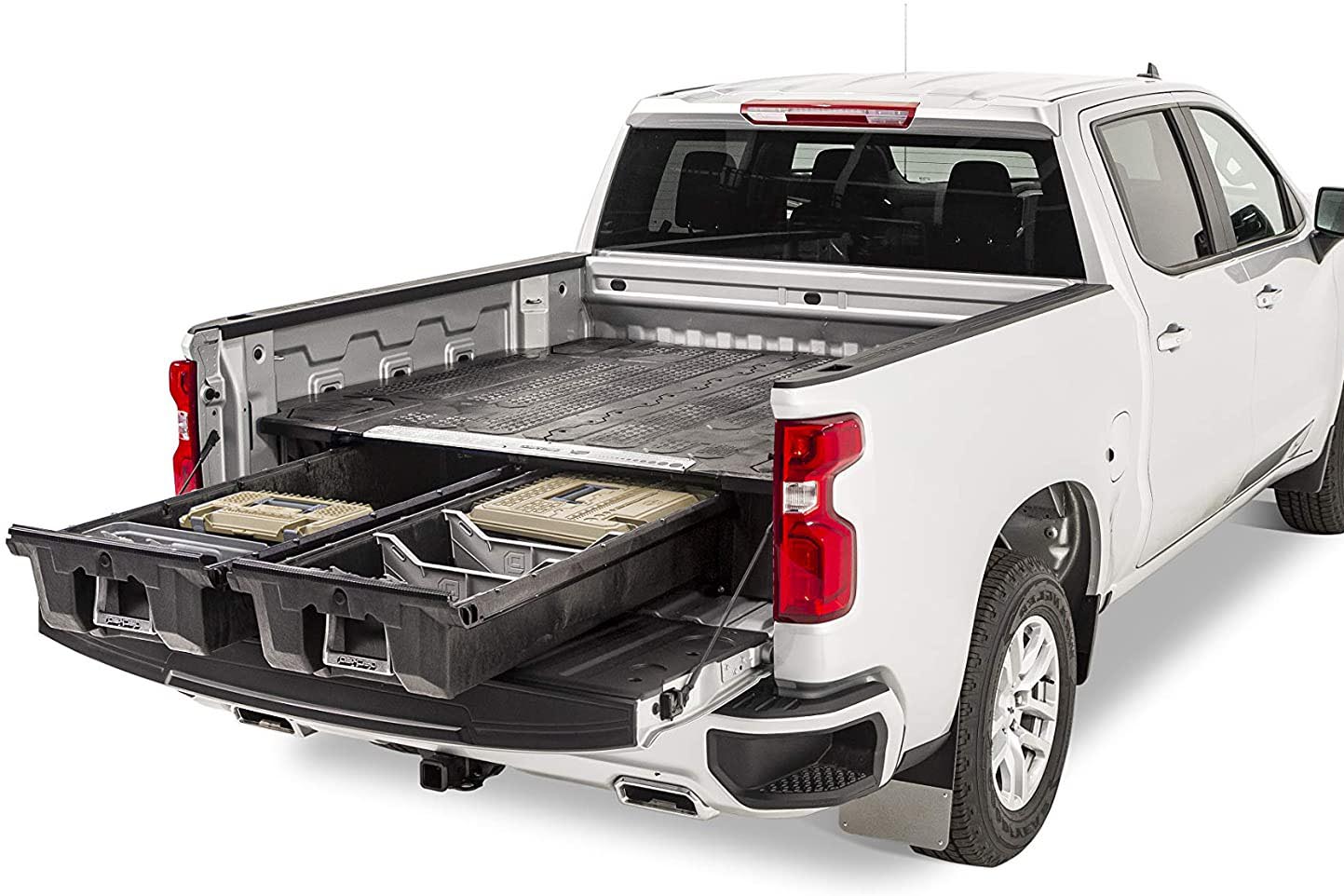 The DECKED Drawer System is a heavy-duty, overkill-in-the-best-way drawer system for full- to mid-sized trucks. A 2,000-pound payload means that you can literally drive your ATV on top of this and magically, the drawers still work. Each drawer supports up to 200 pounds.

And you get more than the drawers and the deck platform. You also get the full organizational system with the kit. This means two lidded boxes, two drawer dividers, and a “drawerganizer.” Four “ammo cans” add small amounts of extra storage in each corner of the system.

The DECKED is expensive at $1,345, but it comes with a lot and it’s built to live forever. And it really is a major upgrade that adds more value to your truck.

Picking Out the Right System

I can’t imagine how much it would suck to have nearly 300 pounds of equipment dropped off and have it be the wrong thing. DECKED makes it decently easy to figure out which system will fit your truck, but it’s probably worth giving them a call just to be absolutely sure.

I called DECKED a few times throughout the order and installation process. Their customer service kicks ass. Do not hesitate to call them; they are wonderful.

An Intimidating Installation? Sort Of

I am handy with a lot of stuff; tools aren’t a part of that handiness.

I mildly panicked when I saw both the tools I needed and the instructions. A hex wrench? What even is that? (Oh! An Allen wrench.)

Plus, the instructions were very aggro about you not being too aggro with torque, and they say you shouldn’t use power tools. They say it many times, in fact. And then they say, “Yeah, we know you’re using power tools. So, at least tone down the torque, bud!”

Of course, I did use a power drill with attachments to build this thing out. The thing is, you really don’t want to torque shit down. So, take it easy with the power. Dial back the power on your drill to the lowest setting. Screw ’til hand tight. That’s it.

If I’d just been going off the instructions, I’d still probably be on step one. Even though I’m a writer, I’m very visual. Thankfully, DECKED has some really fun videos that break down the complete install. I lol’d a few times.

However, I still read the instructions at each point. Each truck build can be a little different. And the videos aren’t entirely thorough.

But, the combo of both video and written instruction was full-stop excellent. Even a tool dummy like me did about 95% of this build all on my own, only minus some lifting of the initial deck. I prob could have done this on my own, so don’t think it’s out of the question if you can’t snag help.

For those using the system without a cover, they recommend drilling a few holes in the ammo cans to let water out. Since my drawers will be under a topper, I didn’t. Maybe I’ll regret that. But I probably won’t.

I did set out all the pieces so I could easily find them easily while making sure I had everything I needed. This was helpful in familiarizing what was what, and I didn’t have to panic search for anything during the build.

The deck is pretty simple to figure out. Labels indicated the driver and passenger sides of the platform. You put together the driver’s side first, and then the passenger side.

Then, you load each individually into the rig, bolt it together, and then center it with the J hooks. With a topper on, this was sort of annoying and I had to jimmy a bit to figure out the back corners.

The one thing I initially screwed on backward was the center vert, which acts as the main center beam of support. You can see in the pic that there are two bolts that match up. Just make sure these are on the same end; they’re your wheelbases for extending the drawers.

It was an easy fix and, thankfully, I caught it early.

Next, you’ll begin putting the drawers together. I had a bit of misalignment with the drawer brackets, but it all worked out. And once together, the drawers were light enough that I could easily lift them into the truck bed on my own. They slid right in without much effort.

From there, installing the front wheels is a bit of a pain in the ass. This is where that hex wrench comes in. With a spray-in bedliner, I found it was a little tight getting the wheels nudged in there. I needed a bit more help to get this lifted and figured out. Ah well. It worked.

The DECKED folks also install one drawer handle for you. This is handy for two reasons. First, you don’t have to do it. And second, you know what the drawer handle should feel like when correctly installed.

The spring system was pretty easy to figure out, though I had to coax the clevis pin a bit. In my mind, I called it the Beavis pin. And I, of course, was the Butthead.

DECKED is clearly made up of a bunch of fun, irreverent folks. The instructions in both written and video form made me laugh. Which is nice in the face of what seemed like an intimidating job.

And their irreverence also adds to a bit of fun on the equipment itself. A super-cool, glossy metal measuring panel offers a bit of informative classiness to the platform, while a branded beer bottle opener is the centerpiece between the drawers.

It fits nicely, as now you have a place to sleep off the brews in the nice, flat platform in your bed.

This took a little over 3 hours for me to put together alone. And it might have gone faster if I had been a little more knowledgeable about tools or snapping it all in with a buddy.

But you learn as you go, right? And I wanted to see if it was something one could do on their own. I think most people could. And I actually enjoyed the process. It wasn’t too complicated or confusing, and in one moment of worry, customer service helped me out.

I thought it might be more stressful to put this thing together. Turns out, the most stressful thing about it is figuring out how to best organize all my gear. But that’s a topic for another time.

If you’re considering buying a DECKED Drawer System, don’t let an intimidating installation stymie your desire. If I can do it with general ease and a little bit of time, it really is a piece of cake.

Plus, you can christen that beer bottle opener when you’re done, sit on your tailgate, and imagine just how many ways you can organize this bad boy of a drawer system.

Up Next: Electric Off-Road Icon: The Mercedes G-Wagon Goes Electric