If you hunt big mountains, Schnee’s Beartooth Women’s Mountain Boots provide the warmth and support you need. Read on to learn about this top choice in big mountain hunting boots.

If you walk into a room of 10 hunters and ask them what the best hunting boot is, you’re likely to receive 10 different responses.

One that will likely always be favored — at least in my neck of the woods — is Schnee’s. In my search for the perfect hunting boot last fall, I took a leap and decided to put the women’s Beartooth 200g Mountain Boot to the test.

Primarily, I hunt big game in eastern Montana. In the summer of 2020, I made the call to retire my hiking boots and invest in a solid pair made specifically for hunting.

Up until that point, my main complaint with my boots was simply not staying warm enough. In the late season of a bitter Montana winter, the most common reason for retiring from a day of hunting was my unbearably cold feet.

When researching boots for fit, function, and warmth, the Beartooth was one of the few that made sense. I made the purchase in early August, which was later than I’d hoped. A stiff pair of boots on a long hike can be detrimental. What I found was that there wasn’t much of a break-in period. To this day, I’ve yet to find a hot spot.

Let’s break it down by looking at the specs, and then checking out the boots’ efficacy over the 2020 hunting season.

Breaking Down the Boot 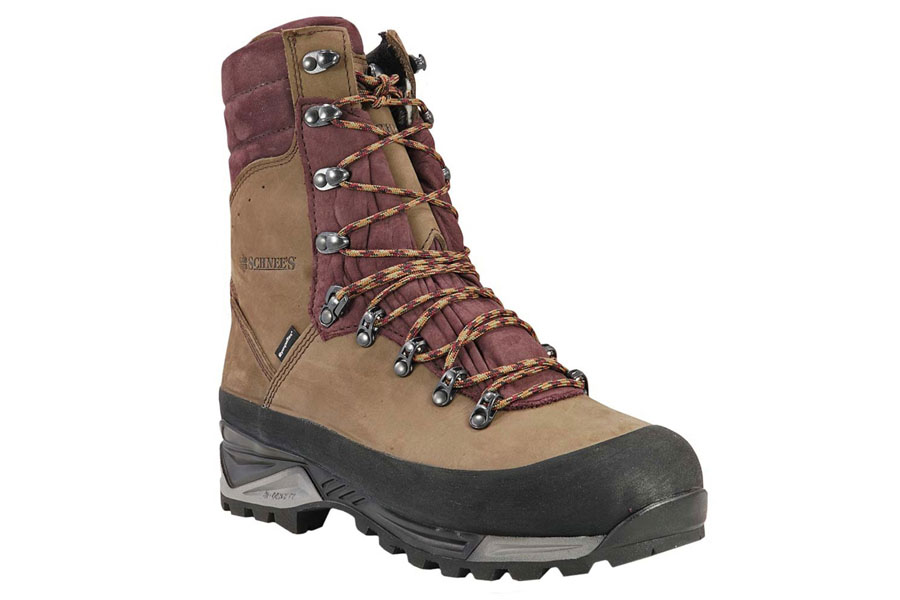 The Schnee’s Beartooth line is handmade in Italy and available in both men’s and women’s offerings. It’s often difficult to find a women’s boot with the same spec as a men’s boot, but the Women’s Beartooth measures up. With 9” of height and 200 g of insulation, they make for a great mid- to late-season pair of boots.

Schnee’s has a Chassis system that rates boot flexibility from 0 to 4, with 4 being the most rigid. The Beartooth sits at a versatile Flex-2, giving enough rigidity for solid support and durability in harsh terrain, while also providing some flex for a comfortable trek.

The upper construction is of 2.3mm top-grain leather with a 100% waterproof membrane called Sympatex. A custom Vibram Tsavo outsole makes for a burly and steady platform.

Note that this boot is seriously costly. For all it can do, it does it at a price point of $449. Ouch. But, depending on your hunting needs, this still might be the best boot for you.

My first official hunt in them came on the opening day of Montana’s Elk Archery Season.

What I learned about my new boots on day one, was that the 200g insulation was warm. Very warm. Almost unreasonably warm — by no fault of their own! By mid-morning, we were sitting in temperatures that exceeded 100 degrees.

A pair of sandals would have been too warm.

My bull presented itself to me 20 minutes before last shooting light, after I’d essentially given up hope, sweat-soaked and exhausted. To be completely honest, I’d already begun stripping off as many layers as possible while hunkered down and waiting.

After running out of water several hours prior, exhausted and overheated, I arrowed my first bull elk, in 106-degree weather, with nothing on my feet but a pair of Darn Tough socks.

Unfortunately, my new boots found themselves benched for the action. I did, however, put them back on for the remainder of the work at hand.

As the season progressed and temperatures dropped, I came to appreciate that insulation.

Deer camp found us with warm, comfortable days, but a serious chill in both the mornings and evenings. I can honestly say that my boots never really crossed my mind. Comfort, warmth and, most importantly, a rugged nature meant I didn’t have to think about my feet.

Through dusty, rock-laden trails or relatively steep inclines, they just worked. If anything is a sign of a functional piece of equipment, completely forgetting about it is up there.

I stood over a beautiful Mule deer buck on a hillside without even considering the state of my feet.

Rifle antelope hunting in the harsh winter of eastern Montana can be brutal with even the best of gear. One day you may be faced with freezing rain; the next, a foot of snow.

One thing that will always be constant is a bitterly cold wind, fields full of hidden cacti, and Montana “gumbo” clay in every state of matter on road and hill. A frozen top layer of gumbo with a still-soft clay bulk underneath is more slippery than any ice flat has dreamed of being. That, paired with more cactus than grass, creates a terrain fit for destroying any boot in one outing.

The Schnee’s Beartooth Boot was not only up to the task, but the boots also completed the task unscathed. I walked easily through cactus, water, across slick clay, or up a hillside.

My feet stayed warm, dry, and comfortable, even when my fingers were frozen to a point of uselessness.

Suffice it to say, I’m a big fan of these boots. They have become my go-to boot when I’m unsure of conditions, when warmth is important, or when I just need a rugged boot to get me through tough terrain.

I’m confident they’ll get me through many more harsh winter hunts in the years to come. Being my first Schnee’s purchase, I had insanely high expectations and I have to say, they were all firmly met.

Honestly, it’s a reach to find the downside of these boots. The biggest issue I found was them being too warm for early-season hunting. Because of that, I will be on the hunt for a warm-weather hunting boot to add to my closet.

Another thing to pay attention to is the fit. Over time, the insulation compresses.

In my experience, the boot felt tight in the store, which made me nervous. Within a few wears, the fit was perfect. Don’t let an initial tight fit scare you.

Early-season hunters may find the boot to simply be too warm. However, mid and late-season western hunters will find this to be an incredibly versatile boot in a variety of landscapes and conditions.

Although not tested for it, I believe this would be a useful boot in early spring and late fall upland hunting as well, for its warmth, sturdy flexibility, and waterproof outer shell.

Because of Schnee’s ironclad warranty, you can be sure that your investment will have lasting value, meaning you likely won’t be replacing your boots any time soon.

The Best Women's Hunting Boots of 2021

The Best Women's Hunting Pants of 2021

Over hill, over dale, through brush, and through briar, your pants and bibs must hold up when you hunt. Here are the best hunting pants for women in 2021. Read more…

Up Next: A Great Backcountry Sleeper: The Feathered Friends Lark 10 UL Sleeping Bag