If you’ve been pedaling all day, that dude smiling with fresh food and cold drink at a rest stop looks like an angel; a trail angel. We sent a team to man a pitstop for riders traversing the U.S. in the 4,400-mile Trans-Am Bike Race, and learned a lot in the process. 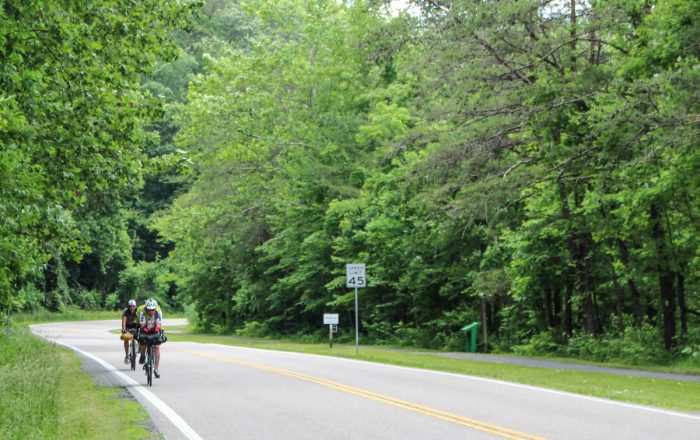 The route covers ten states and the course record stands at just over 16.5 days. We sent our mobile office to mile 500 to serve as Trail Angels in Damascus, Virginia at Bicycle Junction. There, they handed out drinks and grub for the riders coming through while sharing stories about the race and gear tips.

The traditional route has riders pedaling from the west coast to the east coast. However, race organizer Nathan Jones, opened a new option for riders to go east to west this year. The riders from both sides will meet in the middle of the country in the coming days.

Even with the new route option, 90% of the riders have chosen the traditional route crossing the Rockies first and leaving the Appalachian Mountains for the very end. However, six riders went rogue and decided to go the opposite direction from the mass. 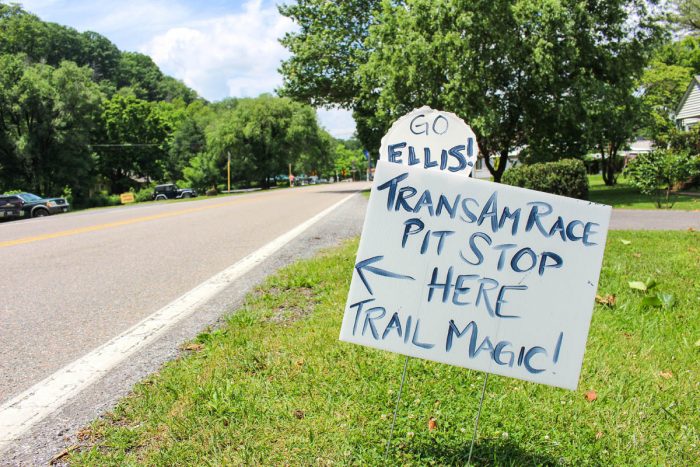 While sharing a little trail magic, we were able to catch up with the six westbound riders. Between pounding Starbucks double shots, sausages, bananas, and ice cream sandwiches, we heard the riders’ reasons for choosing the different route (and opting for the 4,440-mile headwind). Even more surprising were the unique gear choices in their transcontinental rigs. 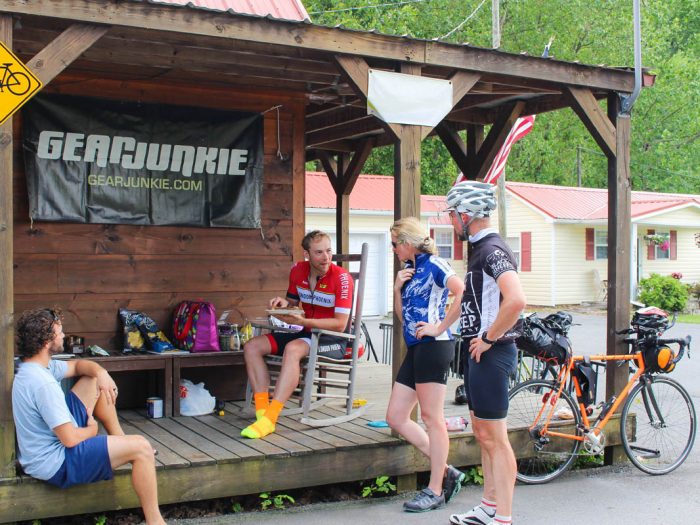 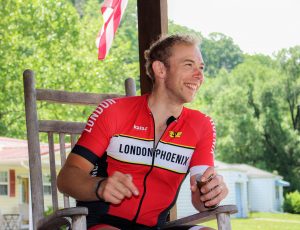 Ellis Dudley from London, England pedaled into Damascus mid-afternoon on Day 3 as the leader of the westbound group.

“Why’d you go against the grain, Ellis?”

“I have three reasons: First, I’ve always wanted to see Montana and the Rockies so I wanted to save the best for last. Second, going eastward seemed backwards to me. The settlers saw the country from east to west, so I wanted to see it like they did. Third, I like to be different.”

Dudley was excited to show us his gear, “I love my gear!” His favorite piece is his Infinity saddle. The saddle relieves the pressure points by having the butt bones sit in the openings of the seat. This distributes the pressure giving a more comfortable ride. Check out GearJunkie’s review of the saddle here. 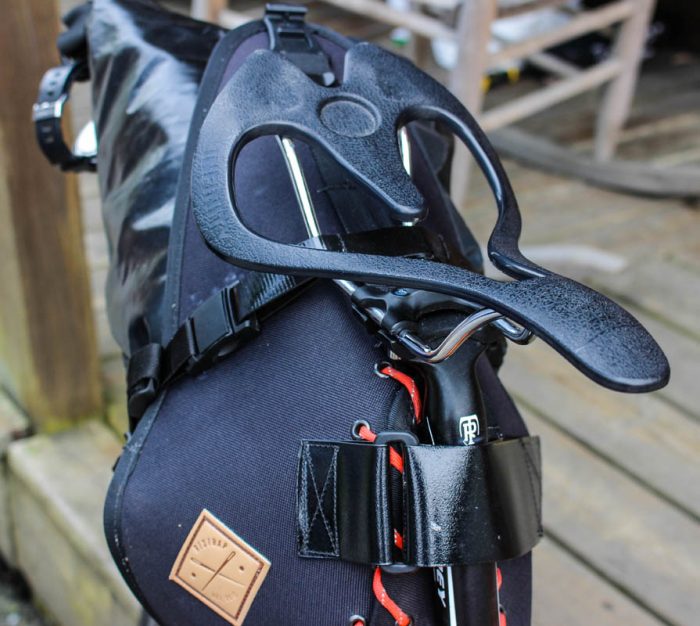 His gear choice after the race: “I love rocking chairs. I need to get one!” After sitting on a saddle for 500 miles over three days, anyone would love a rocking chair!

In the days since Dudley was in Damascus, he’s had an Achilles injury in Kentucky. He’s currently resting up to get better. Stay updated on his ride on the live tracker here. 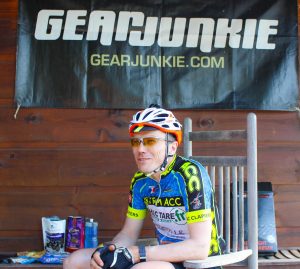 Frenchman Thomas Lambolais pedaled into town in the late afternoon on Day 4. He had a brutal headwind all day along the route in Southwest Virginia.

“Because every guide back home said this was a nicer way for every reason except the wind. I am crazy.”

Next, we asked Thomas about his favorite gear. Instead, he showed us a bag of madness. “Look at this. Only for electronics. All the cables. That’s horrible. When I was riding 20 years ago, I was riding without anything like a computer. It was easier.”

He was exhausted from the wind and the hills. Adam escorted him to Crazy Larry’s Hostel, famed by thru-hikers of the Appalachian Trail.

The married Kiwi couple, Adi Coventry-Brown and Neil Brown, rolled in during the early afternoon on Day 5 of the race. 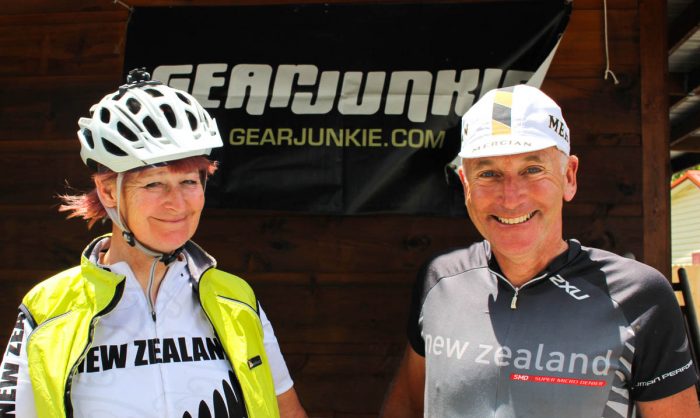 A veteran of the race, Adi replied, “I didn’t want to repeat the same week I had last year. I want to get the sharp ups and downs of the Appalachians done early. This way, I have Montana and Yellowstone to look forward to as the carrot at the end. The last week to finish will mostly be down, and we can just go for it.”

Coventry-Brown started the race in Oregon in 2015, but had to drop out on Day 9 due to illness. “I got lost and had to go up a big hill without food or water at 40 C˚ (104˚ F). I got water along the side of the road. I think I got a stomach bug. I have unfinished business. I want to do this and complete it.”

Brown’s reason was different: “Adi’s year for the race was last year, and then this year was going to be mine. We have different speeds. Then she told me, “I have unfinished business.” So she was going to go east to west this year and I was going to go west to east. I started training. Training is quite mind destroying. I started thinking, ‘I don’t think I’m going to enjoy it.’ I came home from training one day and said, ‘If you want I can do it with you and we can do it together.’ We decided to go west because this is the route she wanted to do.” 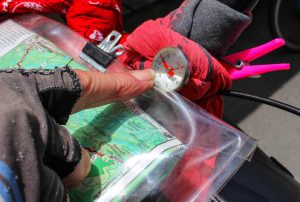 As the two took off to stay ahead of the riders behind them, Coventry-Brown showed us gear we’ve never seen on a bike before. “I have a turkey cooking thermometer serving as a temperature gauge. It’s very accurate.”

Editor’s note: Having spent five months in New Zealand on our around-the-world trip, we know New Zealanders are very innovative. Kiwi’s call their ingenuity the Number 8 Wire. Using an oven turkey thermometer takes it to a whole new level! Good on ya, Adi! 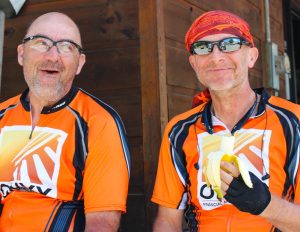 Terry Roe and Ken Simpson rolled into town about an hour after Adi and Neil on Day 5 of the race.

“So why’d you guys decide to go east to west?”

Simpson answered, “The Rockies freak most people out, but we’re from Idaho. The humidity is what bothers me. I wanted to get the humidity out of the way. Second, I’ve already done it.”

Simpson toured from west to east riding from Alaska to Key West. “This is harder than that trip.

Terry chimed in, “Virginia has kicked our butts. This is a whole different ride from out west. You come around a blind corner over here and you’re at a 45-degree angle for the next 15 to 20 feet.”

Roe surprised us with his bike choice to go cross-country. “This isn’t even my bike. I’m using Ken’s.”

The two grew up together, started out as CPAs, and now work together as business partners. “In December last year, we’re sitting in a tax meeting. Ken shows me his phone with the race on it. ‘What do you think?’ I said, “Anything is better than sitting here right now, man!”

“I wanted to do the race, but said, ‘I don’t want to buy a bike to do it.’ You know I’m an accountant. I’m a cheap son-of-a-gun. However, the cheapest part of the trip would’ve been a bike!”

Simpson surprised us with his choice to have an internal hub on his rear wheel. Even though an internal hub is more weight, Simpson decided to go with it because of the reliability in shifting gears, the protection against dirt and grime, and having less maintenance for the cross-country journey.

The first week of the race was a dramatic one. On day five, Australian leader, Sarah Hammond, got lost on a 75-mile detour and was overtaken by Steffan Streich from Greece. Streich still holds the lead followed by Evan Deutsch, Lael Wilcox, Hammond, and Kai Edel. The top five riders have all covered over 2000+ miles in nine days.

Some riders haven’t been as fortunate to make it that far. The seventh westbound rider, Jodi Ashley, wasn’t able to start. Her bike was stolen off her Greyhound bus on her way to the start line. Eastbound rider, Amy Williams’ bike was stolen outside of a café in Oregon. Her family started a GoFundMe page to get her back in the race. A third rider, Laura Scott, was in a car accident. She’s recovered and is back on the road.

Continue to follow the race here as the riders from both sides of the country prepare to pass each other in the coming days. 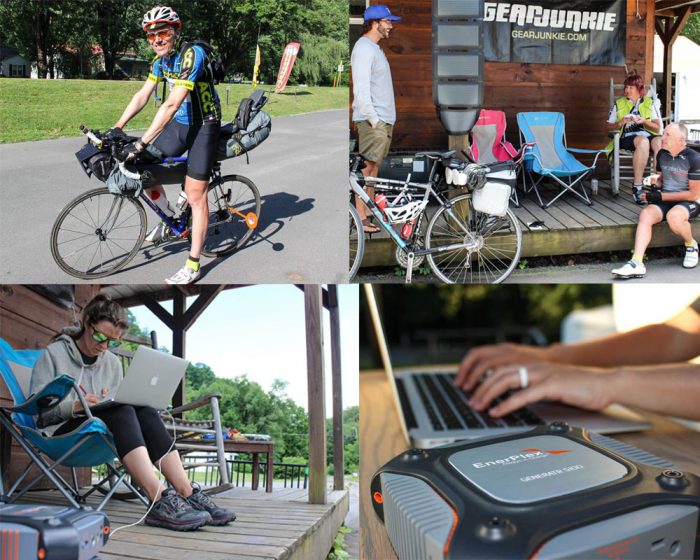