Suzuki pulled out of the North American market back in 2013. But many of us have been pining for the tiny off-road jewel that is the Suzuki Jimny for much longer.

Suzuki just announced the 2019 Jimny, and we want it! Sadly, though, Suzuki is just going to tease us. It doesn’t need us. The brand has sold the Jimny in “194 countries and regions” since 1970. In total, it has sold more than 2.85 million so far, and not one was sold new in the U.S. That’s a lot of tiny off-road vehicles.

While diminutive off-roaders haven’t shown strong sales in the U.S., maybe times have changed. The only “small” true off-road vehicle currently offered on the American market is the Jeep Wrangler. And with nearly 30,000 sold in April alone, the Wrangler managed to outsell the overall top U.S.-selling vehicle, the Toyota Camry.

Suzuki teased an off-road concept ahead of its Tokyo Motor Show unveiling this month. And it looks like a (post) modern twist on an old favorite. Read more…

Why would we want this compact off-roader? Because it should be extremely easy on the wallet as well as capable, fuel efficient, and looks stunning!

The fourth-generation Suzuki Jimny will be a proper off-road vehicle. It will have a ladder frame, which looks to be boxed and cross-braced for serious durability and rigidity. And it will sit on solid axels and have a selectable low range as well as a legit part-time four-wheel-drive transfer case.

While all the specs aren’t out yet, we do know that the Jimny will be offered with a four-speed automatic and a five-speed manual transmission. Details on the powerplants remain vague.

The Japanese market will probably get an engine as small as a 660-cc inline three-cylinder. The rest of the world will probably have a few options, up to a 1.5-liter inline four-cylinder. Don’t expect a V6, like in the Wrangler, or what American’s truly love, a big V8. 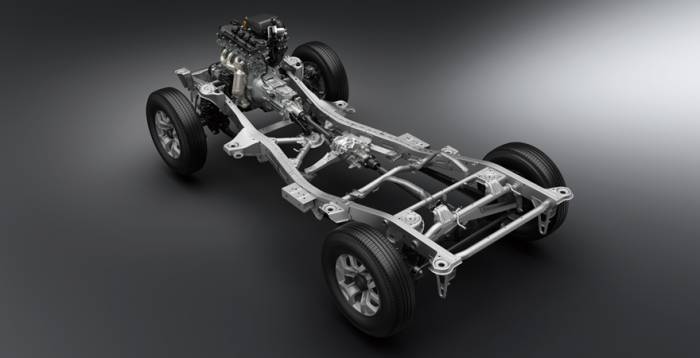 Besides being rugged, capable, and probably massively fuel efficient, the little Jimny will also be pretty comfortable.

The interior looks utilitarian but also has some nice creature comforts. It has a sizable touchscreen infotainment system, keyless push-button start, air conditioning, cruise control, and a multifunction steering wheel. You even get such modern touches as LED headlamps, halogen fog lamps, and electric retractable door mirrors.

Suzuki is even thinking about safety. It has outfitted the Jimny with a forward collision warning and braking system. The system uses sensors and cameras to apply emergency braking when approaching obstacles at too high a rate of speed.

The Jimny Is Cute

Besides all its capabilities and modern refinements, we really want this little off-road machine because it looks cute as hell! We do mean small, as it’s a four-seater — and a snug one at that. 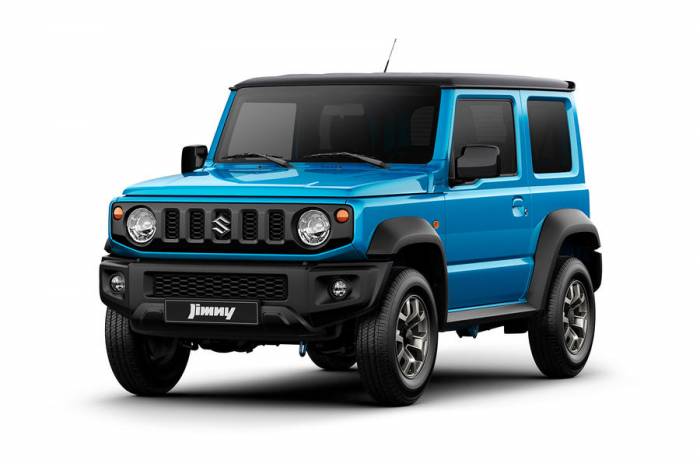 The Jimny has a chiseled, boxy shape, which should last the test of time. Think Land Rover Defender, Willys Jeep, and Mercedes G-Wagon. Boxy works, both for optimum space and longevity on the market.

Initially, the Jimny will be offered in eight color options. I really like the two-tone options with the blacked-out roofline. They remind me of old Land Rovers. 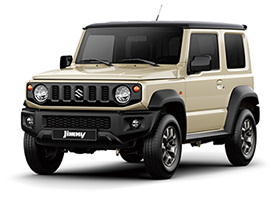 And the two-tone “Chiffon Ivory Metallic” might be my favorite. It looks very safari ready.

Nope, No Jimny for US

Suzuki no longer sells vehicles in the U.S. and doesn’t plan to. The Jimny is going into its fifth-generation, the first redesign since 1998. It finally has the features and comforts American buyers are looking for but has no brand dealer base in this country to sell through.

Maybe someday, but for now we can just keep dreaming. We have to just look at the rest of the world and their tiny Jimnys with desire and resignation.

Suzuki, we want the Jimny!