LED technology changes so fast that a flashlight today is no longer cutting-edge within a year. These torches represent the current edge for massive illumination in the palm of a hand. 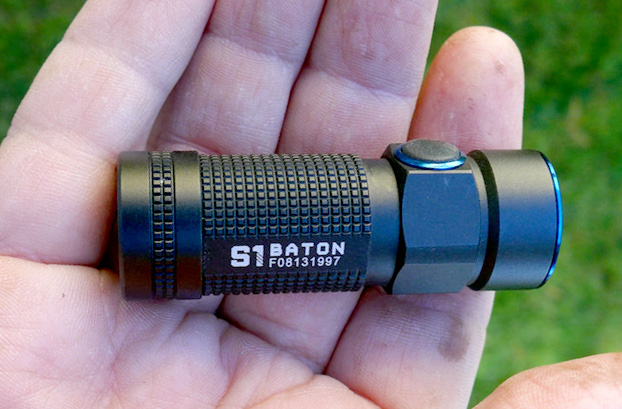 Reviewing these lights, I found excellent performance and run time in packages small enough to fit in a pocket. Most are not much more expensive than the lights in peoples’ junk drawers.

But it’s not just brightness — the lumens arms race is for fools. The important specs are a light’s size, beam, and user interface.

The flashlight market is experiencing something of a boom right now and we are treated to myriad amazing lights, all perfect for EDC. Unfortunately, the brick and mortar retail world has not kept pace, but you can find these easily online. These five are my current favorites.

The recently released S1 is one of the very best flashlights available, period. Its tiny size, blazing 500 lumen output, 360 foot beam distance, amazing clicky user interface, and great tail-standing capabilities make it a light that can take on all challengers. Oh, and you get all of this for $50. If they made a Nichia 219b version, it would be perfect. And, in my opinion, take off the pocket clip and throw it away.

It’s hard to not have the Peak Eiger at number one; it does so much, and can be upgraded and customized in many ways. It comes out of the box with shock and water resistant epoxy sealed heads and kicks out at least 200 lumens on a lot of different battery chemistries. But the big innovation with the Eiger is the use of a QTC (quantum tunneling composite) “pill” to regulate output. With no pressure on it, the pill is a perfect insulator and the light doesn’t turn on. As pressure is added (caused by twisting the head of the light), it becomes a better and better conductor. The result of this extraordinary property is sliding-scale conductivity that allows the Eiger to have true infinite variable brightness out of the box with only one moving part.

It’s not cheap, nor is it the brightest light in the world. But the HDS Rotary is built to outlast everything — including its owner. HDS “pots” the electronics (meaning the company seals them in an epoxy to prevent them from moving or being affected by most liquids). Add a thick, useful bezel and massively thick aluminum walls, and the result is a light that feels more like a collegiate baseball bat than an illumination tool.

Add one of the best user interfaces in the world — a perfectly placed selector ring that allows you to scroll through more than a dozen discrete outputs, from whisper bright to screaming — and you have a winner. The beam is also quite nice, a neutral color with an excellent balance between spill (the dimmer halo) and hotspot (the bright dot). It’s top of the heap.

Ten years ago, the Eagletac D25AAA was unthinkable — a 93 Color Rendering Index (allowing exceptional color perception), 85 lumen, single AAA light was nigh impossible. Five years ago, it would have cost four figures (yes there are four figure flashlights). Now it’s $29 on Amazon.

Flashlights improve at a pace that is matched only by computer chips (largely because flashlight improvements are based on computer chips) and so this sort of technological development is something that folks who know and love flashlights come to expect. The output, runtimes (around 42 minutes on high), and Hi CRI emitter are all magnificent, and at a price equal to cheap flashlights at big box stores. A magnetic tail-cap is a nice added touch.

The Surefire Titan Plus does something no other single AAA light can do — run at 300 lumens for an hour. That’s the flashlight equivalent of reaching the 500 horsepower threshold in sports cars — it’s a number that means something. The Titan Plus (and to a lesser degree the Titan) is amazing. Surefire quality and performance at a sub-$100 level is hard to beat. Also, the washer-style clip is awesome. The only issues are the inability to tailstand and the twist-twist-again user interface — minor drawbacks on an otherwise superb tool.