Home » Technology » Passenger ‘Drones’ To Carry People Thru The Sky

The idea of a “flying car” may be getting close to reality. This tablet-controlled “passenger drone” fits one person and is essentially a bigger version of the unmanned aerial vehicles now becoming common for filming outdoors. 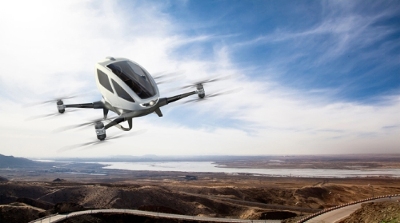 According to the company:

“The ready-to-fly AAV is a manned drone capable of automatically carrying a passenger through the air, simply by entering a destination into its accompanying smartphone app. Due to the 184’s fully automated navigation, made possible by EHang’s 24/7, real-time flight command center, passengers have no need for a pilot’s license – they simply sit back and let the drone take over from there.”

Holy cow, things just got real. EHang notes this first realization of automated flight “signifies a major turning point not only for the transportation industry, but also for a huge swath of other fields such as shipping, medical care and retail.”

If you’ve ever used a modern UAV (drone), you probably recognize how simple they are to fly using global positioning and smartphone technology. They maneuver anywhere in the sky and basically land themselves.

That’s not to say it’s foolproof. Plenty of high-end drones end up crashing at some point, so we’d be slow to hop aboard one of these just yet. However, this is an incredible step toward what could one day be aerial transportation for the masses.

Said EHang’s CEO Huazhi Hu: “It’s been a lifetime goal of mine to make flight faster, easier and more convenient… the 184 provides a viable solution to the many challenges the transportation industry faces in a safe and energy efficient way.”

He continued, “I truly believe that EHang will make a global impact across dozens of industries beyond personal travel. The 184 is evocative of a future we’ve always dreamed of and is primed to alter the very fundamentals of the way we get around.”

The EHang 184, was named for “one” passenger, “eight” propellers, and “four” arms — thus 184. It was designed with redundant systems for safety, according to the company.

EHang claims the 184 will be a safe alternative for short trips. “Automated flight eliminates the most dangerous part of standard modes of transportation: human error,” the brand reports.

Beyond automating flight, the brand touts multiple backup systems, a “Fail-Safe System” that automatically lands the vehicle in event of damage or malfunction, multiple sets of sensors that provide the drone a constant stream of real-time data, and an emergency button that allows passengers to halt flight and “simply hover in the air” with a single click.

The EHang 184 takes off and lands vertically, subsequently eliminating the need for runways. It also folds for storage, an important trait if it is to be used in cramped urban settings.

We’re not holding our breath for our first ride in the EHang 184 just yet. But with the rapid growth the unmanned aerial vehicle market in recent years, it seems there is massive potential in these devices for transporting passengers.

And while the technology may already be here today, it will likely be a decade or more before regulating agencies catch up. But we’re still excited by the prospect of flying to and from work on the daily commute.

Ehang made a drone YOU CAN RIDE IN #CES2016 pic.twitter.com/vPSPDFVWCr