The Garmin fenix line of watches has been a stalwart fixture at starting lines of major races around the world for a decade. But for the first time, it will offer solar charging in 2019.

Garmin today announced the fenix 6 series, the next generation of its GPS multisport smartwatch lineup. According to the brand, the fenix 6 collection includes Power Manager for longer battery life, allows runners to compensate for elevation changes with new PacePro technology, and introduces the largest round display from Garmin.

And it adds solar charging for the first time. 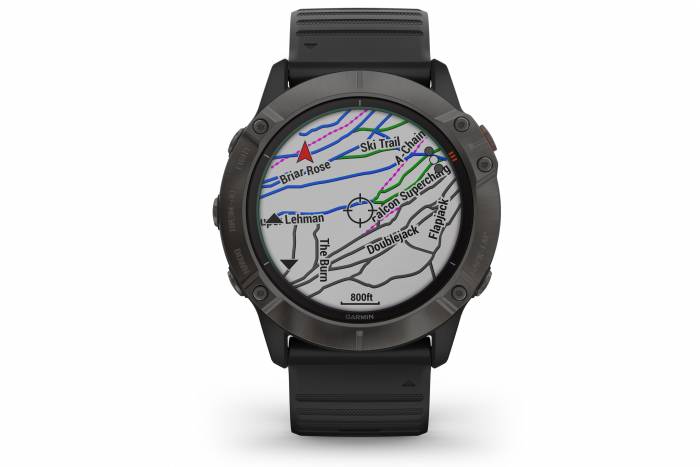 “We are thrilled to introduce solar charging into the new fenix 6X Pro Solar edition, giving users all of the features they’ve come to expect from the fenix lineup with increased battery life and larger displays,” said Dan Bartel, Garmin vice president of global consumer sales.

The entire line is not solar. But Garmin’s premier offering in the fenix 6 line does carry what the brand calls “Power Glass.” This transparent, solar-charging lens uses the sun’s energy to extend battery life. The fenix 6X and fenix 6X Pro Solar have a 1.4-inch sunlight-readable display. It’s 36 percent bigger than that of previous fenix 5X models.

Users can check the latest solar input right on the wrist so they know in real time how much solar energy the Power Glass has been exposed to. 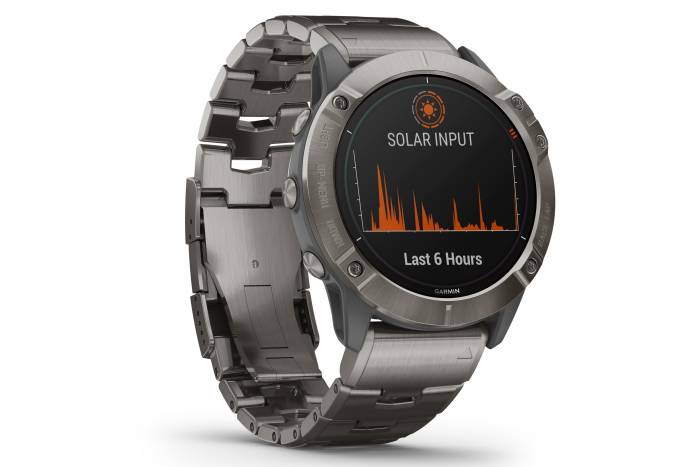 Only the Pro Solar version has solar charging. The battery performance on the fenix 6X Pro Solar in smartwatch mode is 21 days, plus an additional 3 days when utilizing the solar-charging capabilities.

The Garmin fenix 6 line comes in at the tippy top of the fitness watch market. It starts out at $600 for the most basic fenix 6 in silver with a black band.

But the prices quickly escalate. The fenix 6 Pro rings in at $700, and the Pro Sapphire edition cost a whopping $800. Want to go top of the line? The fenix 6X Pro Solar (which is the one you obviously want) carries a $1,150 price tag.

Garmin designed the fenix 6 and fenix 6X multisport GPS watches for a trimmer, more comfortable fit. We have not seen them in person yet, but they look nice. It also introduced QuickFit nylon bands and silicone colors. Sapphire editions add the quality and durability of a scratch-resistant sapphire lens and other high-performance premium materials. 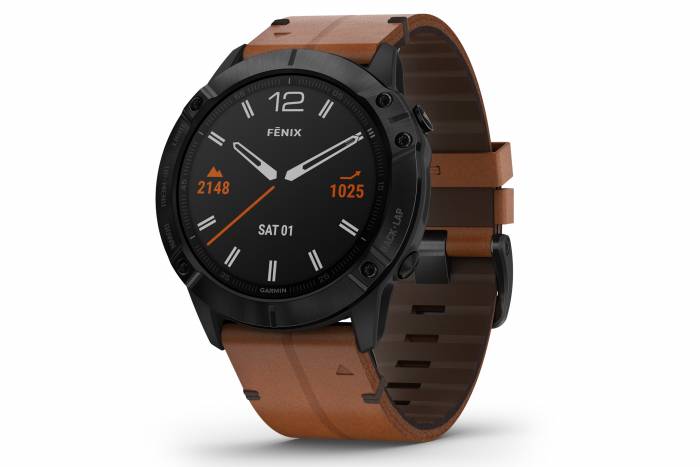 The fenix 6 series introduces a first-of-its-kind PacePro feature. It keeps a runner’s pacing strategy on track with grade-adjusted guidance during the course. Runners can create plans directly from the watch or ahead of time on Garmin Connect or Garmin Connect Mobile.

While running, users can see their target split pace, the actual split pace, distance to the next split, and how much time they are ahead or behind on their target, right on the watch face.

Out of the box, the fenix 6 series includes topographic maps for outdoor adventures. It also has ski maps for more than 2,000 ski resorts worldwide, and 41,000 golf courses. The series features on-device music storage of up to 2,000 songs, allowing users to sync playlists from several of the most popular music services2, no phone required.

The Power Manager allows the user to see and control how various settings and sensors impact battery life. The battery remaining can be represented in hours and days. Users can adjust their battery-saving modes, which disable certain features to extend battery life on the fly.

All models include a wrist-based heart-rate monitor for all-day stress tracking. Plus, it works underwater for swimming and has Pulse Ox² blood-oxygen saturation monitoring, advanced sleep monitoring, and altitude acclimation. The watch line’s Body Battery energy-monitoring feature lets users see their body’s energy levels at any given moment.

Using a combination of data gathered from stress, heart-rate variability, sleep, and activity, a higher Body Battery indicates the time is optimal to be active whereas a lower number suggests rest is in order. Body Battery assists users in making sense of patterns, demonstrating how behaviors and activities of the past few days influence how one feels at a given moment. 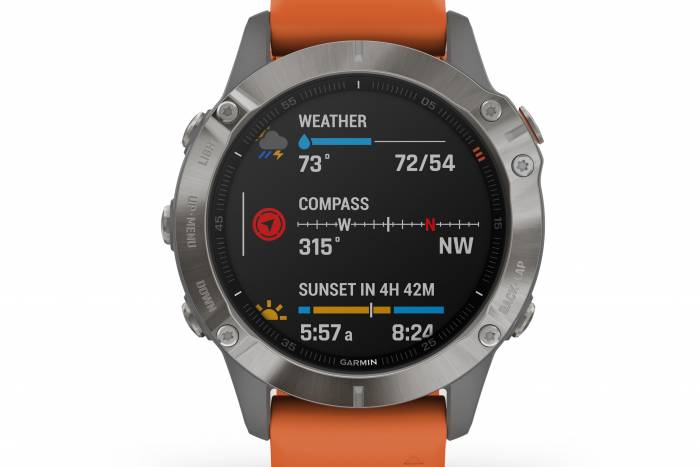 The fenix 6 series receives alerts for incoming calls, texts, and emails by enabling smart notifications. All models also include Garmin Pay, a contactless payment solution that can now be used at major transit systems around the world. Commuters simply tap and pay per ride with their watch — no transit card, phone or wallet needed.

The new line looks slick. If its battery management and solar charging component prove useful, it will certainly remain a top choice among premiere smartwatches.

Up Next: This Electric Chainsaw Is My Must-Carry Trail Maintenance Tool