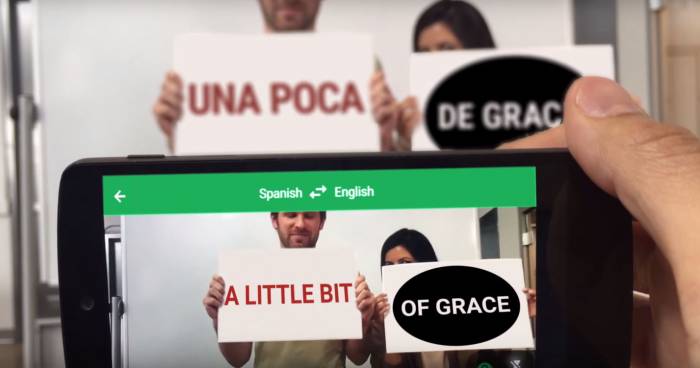 Google acquired the app Word Lens, and for six months it has allowed users to translate seven languages of written text instantly.

We’ve tried it, and it’s an amazing product — it works really well, even with weird fonts.

Translate App In Use

To use Google Translate, you simply hold a phone up and the camera instantly translates text from another language into English (or your preferred first language). Using it the first time is almost a magical experience.

You can also translate from English to: Hindi and Thai.

Sorry, no Greek or Japanese visual translation just yet, but we suspect languages derived from non-latin alphabets won’t be far behind.

Other functions on the Google Translate app, such as voice translation or typed-in text, work in 40 languages, including Japanese, Greek and Arabic. With 90 languages already available on Google Translate online, we’re guessing many more will be coming to the text-reading app soon.

The update is rolling out over both iOS and Android. It is free and available for download now. If you’re going to head to foreign lands, bring this app along. It’ll come in handy if you don’t speak the language.