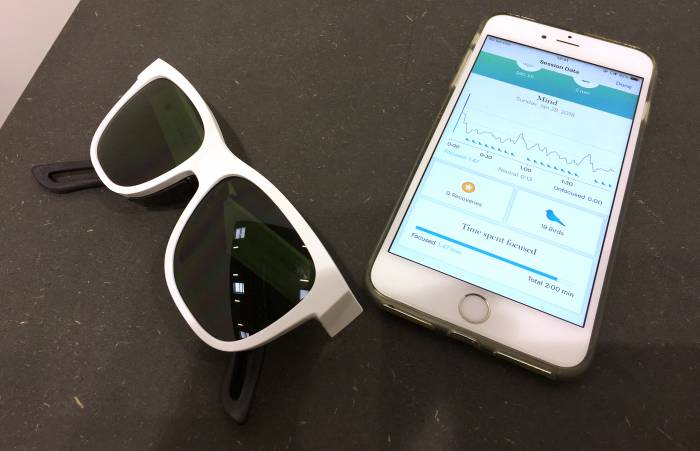 While physical ability provides an edge in competition, strength of mind sometimes determines the winner.

Being mentally strong gives focus when the pressure mounts. The likes of Roger Federer, Lindsey Vonn, Michael Jordan, and Michael Phelps transcended their peers with a persistent ability to focus, thrive, and deliver in the highest-pressure situations.

We all know how important mental toughness is in sport, yet most of us give it zero attention in training. We spend hours lifting weights, doing intervals, working on our cores, and smashing out burpees because we’re told it will make us physically stronger. But when it comes to strengthening the mind, the majority of us wouldn’t know where to begin.

In short: I tested the Smith Lowdown Focus at the ISPO trade show in January. Smith claims you can mentally train and improve concentration by wearing them and using an app. After an initial test, I can imagine using the glasses to hone my mental calmness. While too brief a test to know if it would ultimately work, I imagine it could improve my athletic focus and performance.

GearJunkie’s news editor also made a First Look video, below, to explain some of the Smith Lowdown Focus’s features.

The Smith Lowdown Focus is the first “brain-sensing” eyewear. The glasses aim to improve concentration by training you to block out distractions and focus on a task. Using brain-sensing technology integrated into the nosepiece and arms, the sunglasses monitor what’s going in your mind. An app crunches the data, interpreting it as a score.

The goal is to train yourself to recognize the feeling of focus. Thus, you should be able to tap into that mindset more readily when the pressure is on.

The test involved firing up the companion MUSE meditation app, donning the Lowdown Focus sunglasses, and popping in a pair of headphones. I sat quietly for 2 minutes and focused on breathing. The app interpreted my brain activity via Bluetooth and audibly translated it into the sound of waves.

The louder the waves I heard through the headphones, the less focused I was. When I was super focused, the waves subsided. When I was really in the zone, I heard birdsong. The more tweeting I heard, the more zen-like my focusing skills.

At the end of the test, I received feedback on my performance via the app and a birdsong score. Think of it like a game wherein you earn points – bird tweets – for corralling your thoughts into a focused state. As your brain wanders, ambient sound guides you to remain focused.

And your performance is measured by the glasses. Well, the alpha, beta, delta, gamma, and theta brainwave sensors in the glasses.

Over the course of the 2-minute test, I successfully “focused” for 1 minute 47 seconds, was “neutral” for 13 seconds, and kept from straying into “unfocused” completely.

Incredibly, I managed to score 19 birds, which turned out to be the highest score recorded at this year’s ISPO!

Smith claims the Lowdown Focus sunglasses will help users become more mindful in their athletic endeavors with mind training. But with a price of $349, the pursuit of flow comes at a cost.

And we’ll admit, wearing sunglasses to meditate is a little like wearing a cape to monitor heart rate. It’s not a perfect pairing, but the tech is interesting.

If you’re already partial to a spot of yoga and meditation, then the idea of a reward-based, competitive, and rather expensive route to mindfulness is unlikely to appeal.

Yet for every zen master, there are a thousand more bird brains who could do with the kind of mental training that the Smith Lowdown Focus sunglasses offer.

In the fast-paced, hectic, and uber-competitive modern world, any opportunity to sit quietly for a while and tap into the internal has to be a good thing. And if that also translates into improved sporting performance out in the field, then you’re looking at a win-win situation with the Lowdown Focus.