Buy a bike online with a suite of customization options, then assemble it from the ground up after delivery. THESIS claims to save customers thousands of dollars and reimagines the future of local bike shops.

Randall Jacobs is not your typical bike nerd. A former professional mountain biker, Jacobs holds a degree in economics, speaks fluent Mandarin, and has already held influential positions within the cycling industry.

And not surprisingly, his business is not your typical bike brand. Launched this year by Jacobs and co-founder Alice Liu, THESIS aims to change the way people buy bikes. With its factory-to-consumer model, THESIS promises to save shoppers money, provide nicer bikes, and create a tighter relationship between people and their local bike shop, mechanic, or fitter in the process. 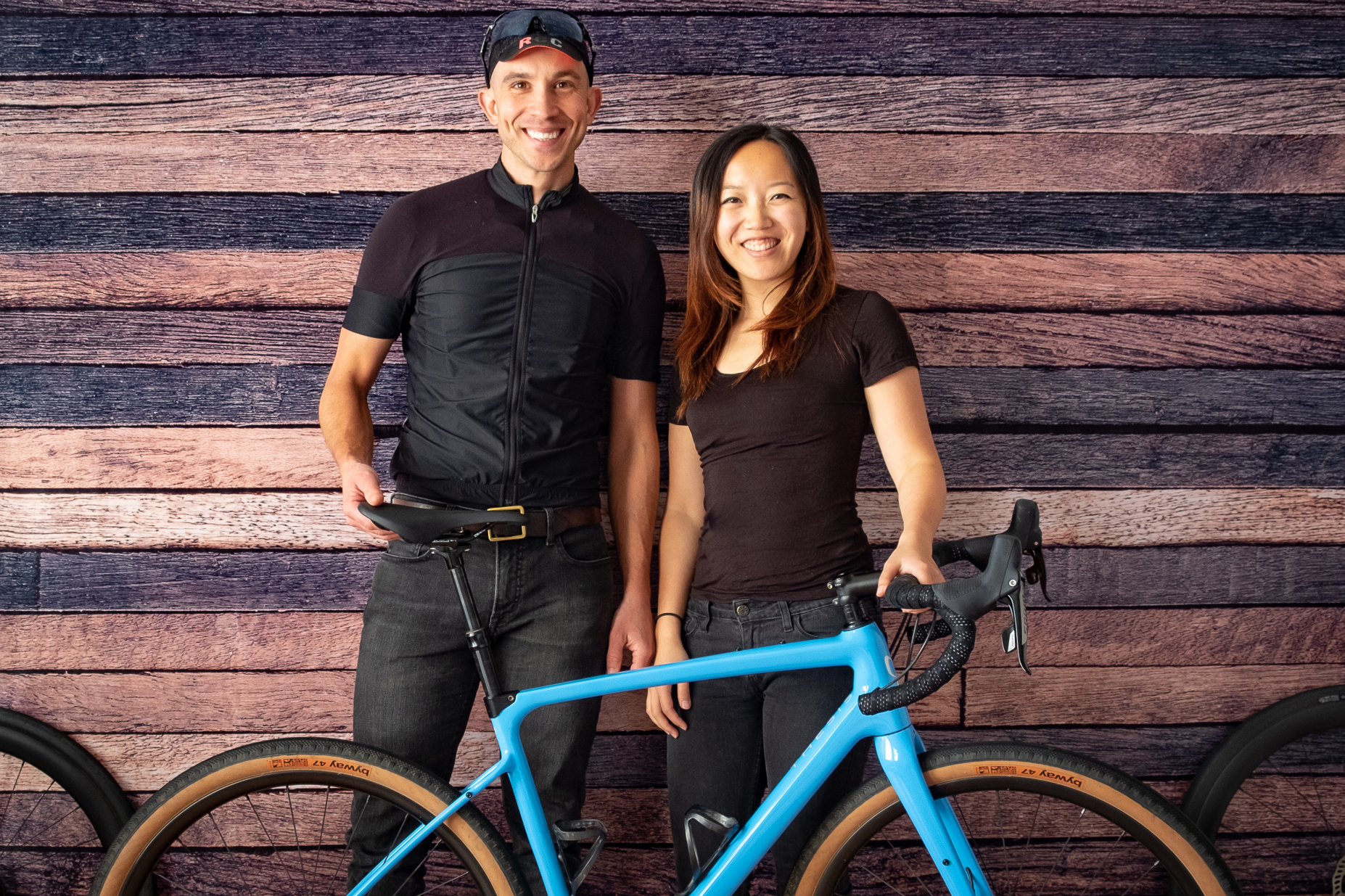 To be sure, THESIS will not be for those shopping for a first bike. Rather, it’s aimed at riders who have decided that a blend of road, dirt, and gravel riding is for them and are looking for a bike with maximum versatility. As you’ll see, with the components and specs THESIS offers, its bikes are for serious cyclists.

We caught up with Jacobs at this year’s Interbike show to find out how THESIS works and what makes it different. And best of all, we got to take a THESIS bike for a first spin.

So what’s the business model? Think factory direct with a twist. Using the THESIS website, shoppers order a new bike. At present, THESIS only offers a single model, the OB1. But Jacobs said the brand has plans to offer more in the future.

But the OB1 isn’t a one-size-fits-all build — not by a long shot. Buyers can choose builds optimized for gravel, road, bikepacking, and more. Or they can opt for a custom build and select the color, size, gearing, and even the wheel size they want. There are also several upgrades to make along the way.

That bike’s frame and fork are then produced in Asia and boxed up along with the selected parts and wheels. Then, eight to 12 weeks later, the boxes arrive with all the parts to assemble a new ride inside. According to Jacobs, the bike is about 20-percent assembled with the wheels fully built. 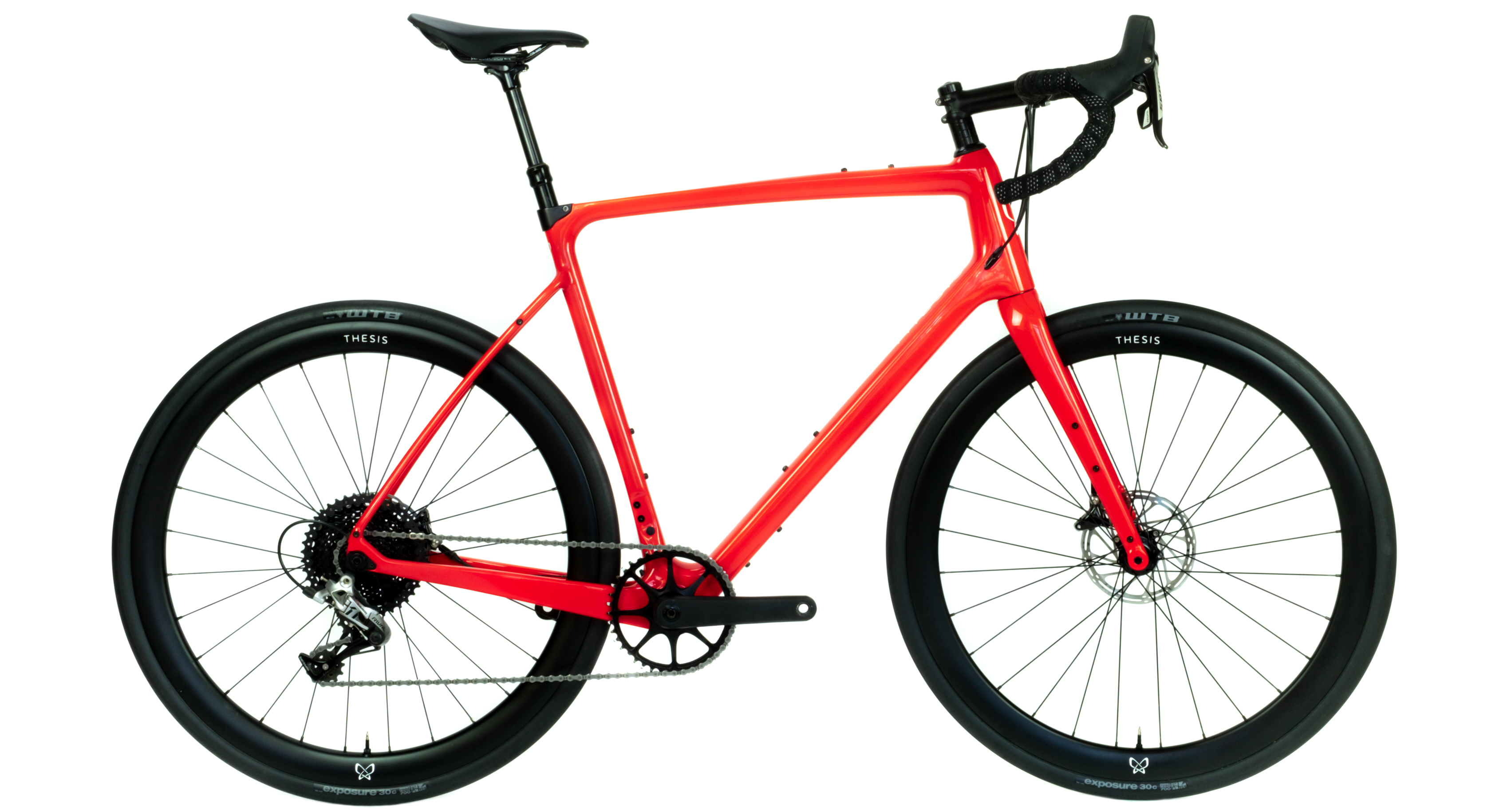 A complete bike from THESIS starts at $3,000 and depending on options — like a dropper post, an extra stem, and custom paint — can run up to $3,500. Compared to major bikemakers, it’s clear that the OB1 offers significant savings. For $3,000, buyers get a carbon fiber frame, fork, and, perhaps most impressive of all, a carbon-fiber wheelset with uber-reliable DT Swiss 350 hubs. SRAM Rival hydraulic disc brakes and a 1x drivetrain offer fantastic stopping power and a wide range of gearing.

And the handlebars, stem, seatpost, and crank are all quality aluminum offerings that, despite lacking a name brand label, get the job done just fine. A similar bike from a different maker, sold using the more traditional dealer model, would easily cost north of $5,000.

THESIS Against the Competition

Spec’d with carbon wheels and SRAM Rival groupo, it’s difficult to directly compare the OB1 with another gravel grinder on the market. In my opinion, the closest analog might be Specialized’s Diverge Expert X1.

For that bike’s $5,000 sticker price, you get slightly nicer SRAM Force parts, the Specialized Future Shock front suspension, and a similar carbon wheelset. But, as noted, it comes in about $2,000 over the THESIS option.

Ibis also offers a Rival 1 build with the Hakka. It comes in at $3,200 but has alloy wheels and, according to Jacobs, inferior bearings in the hubs and bottom bracket. For that same price, the OB1 offers carbon wheels and a dropper post.

So while you’ve just saved a couple thousand dollars, instead of a bike, you have a pile of parts.

That’s significantly different than other some-assembly-required bike purchases. Other brands fully assemble a bike, then disassemble a few key parts for shipping. Those brands recommend that customers visit an experienced mechanic if they’re uncertain how to reassemble the bike. THESIS, by contrast, makes buyers sign a waiver and ships an almost completely disassembled bike. The wheels, however, are laced, dished, and ready to go. 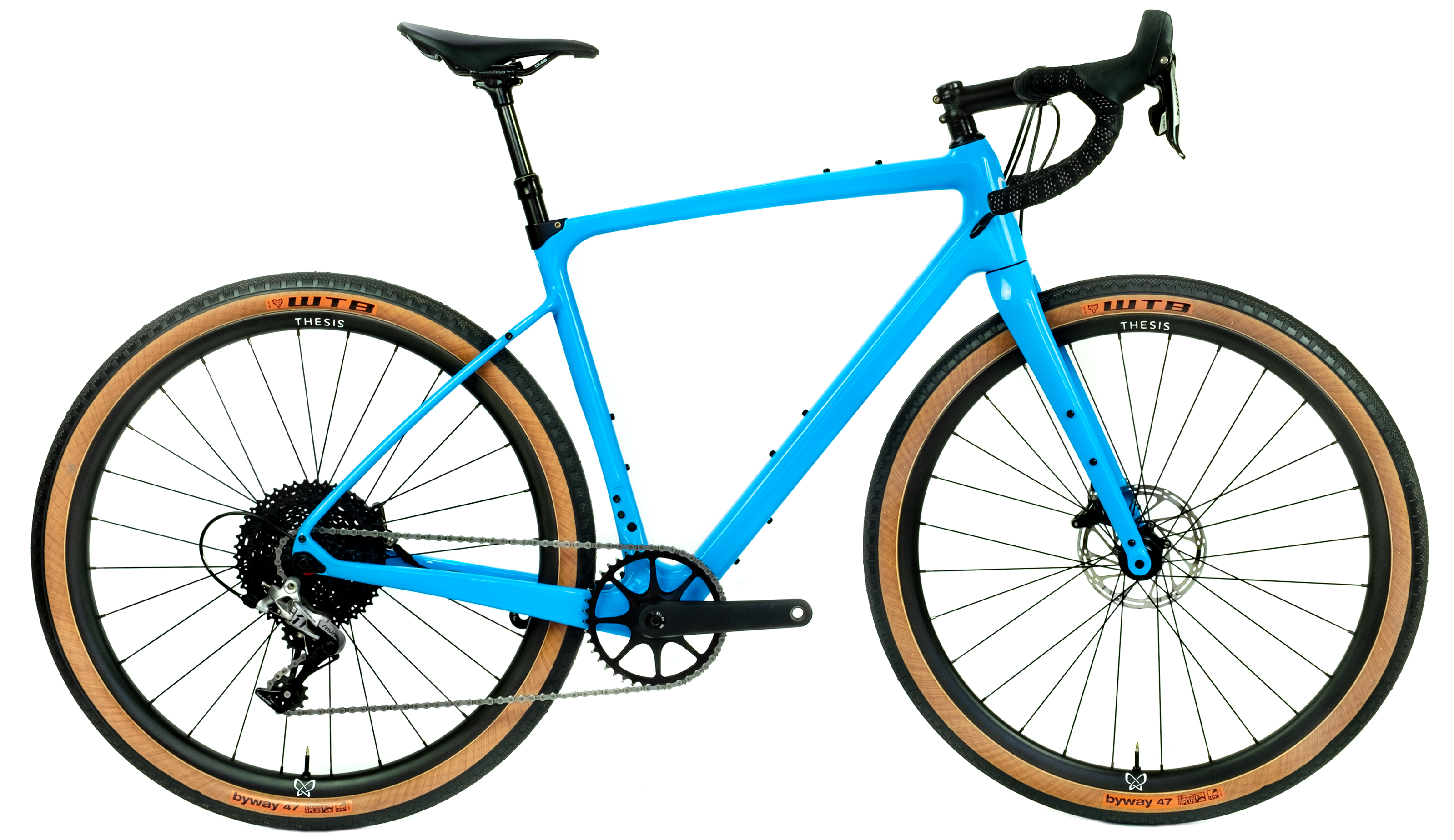 But according to Jacobs, this provides an avenue for people to engage their local bike shops (or mobile mechanics). THESIS encourages all of its customers to take those boxes of parts to a professional for assembly. And ideally, before anyone even orders the bike, they will also see a bike-fitter to ensure that the bike, stem, handlebar, and crank length are appropriate for their size. Between the fitter and the mechanic, buyers can expect to spend another $300 to $500. But that’s still about $1,500 saved, and you have a bike that’s professionally assembled and fits you perfectly. Not bad.

So despite the factory direct model and its connotations, Jacobs is still a big fan of the local bike shop. In fact, he argues that the THESIS business model is better for potential dealers as well as end users.

“I hope that we are copied. I see this as the way forward for the bike shop,” Jacobs said. “The future of the bike shop is not as a dealer. It is as a local bicycle professional. They can help you design your bike, configure your bike, and assemble your bike.”

So what exactly is the OB1? The brand describes it as “a quiver killer for road, gravel, bikepacking, cyclocross, or touring.” To find out for myself, I met up with Jacobs at the Northstar Resort near Truckee, Calif., during the Interbike trade show. Aboard a pair of OB1s, we made our way up a paved climb, explored a couple singletrack dead ends, legged a short hike-a-bike, and meandered through Forest Service roads over the course of a two-hour riding conversation. 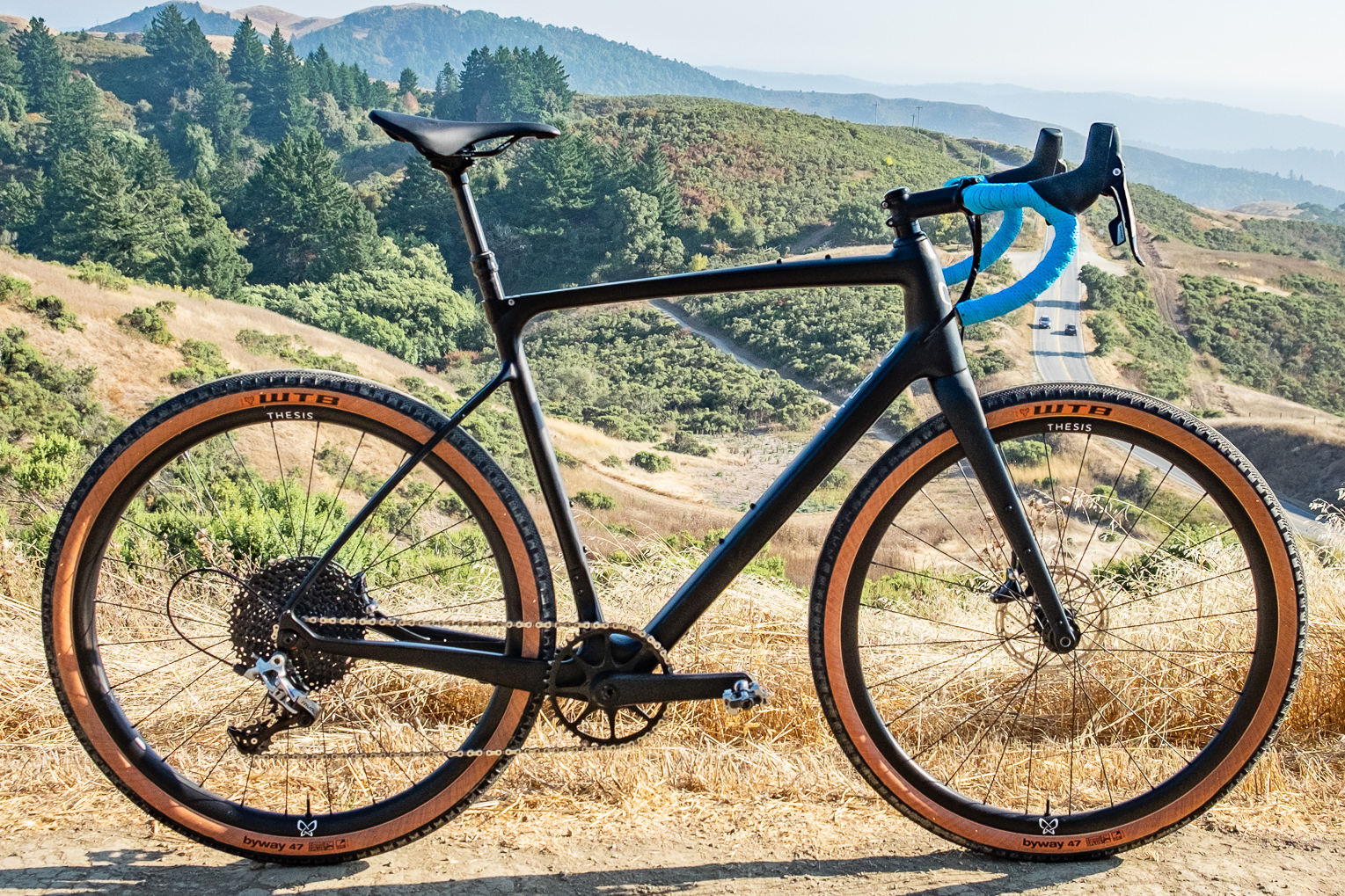 I got a good sense of the bike and the man behind it as we labored our way up dusty hills. The OB1 shined throughout. I rode an OB1 equipped with 650b wheels and WTB’s 47-mm-wide tires. A 42-tooth chainring and a wide-range 11-46 cassette on the back made climbing a treat. My bright-blue bike was stable at speed, fun in the corners, and efficient on climbs. And the dropper post helped on descents, lowering my center of gravity, and keeping the saddle out of the way as we scooted downhill.

The frame has three mounting locations for water bottles, and the fork has an additional pair of cage mounts. On the top tube sits a set of bosses that can be used to attach a bikepacking top tube bag. For riders in wet climates, there are fender mounts on the frame and fork.

And for commuters and bikepackers, the frame also has provisions for mounting a rear rack. These add a lot of versatility to the OB1, something that is increasingly common as gravel and bikepacking bikes continue to gain popularity.

At the end of the ride, I came away impressed. The OB1 certainly delivers a lot of bike for the price tag. The parts selection makes a pile of sense as a bike’s frameset, wheels, and tires have the greatest impact on its performance and comfort.

As Jacobs told me during a phone interview, “Invest in those people, activities, and components that actually add value to your ride. That’s the philosophy behind our decision making, even though it’s a more difficult story to tell.”

The Future of Bike Buying?

The first batch of THESIS OB1 drop bar bikes — the adventure build — ships in late October. Jacobs and Liu have already proven that there is interest not only in the product they’re offering but also in the buying process THESIS is based on.

And if Jacobs is correct, the THESIS model won’t just be a boon to consumers. It paves a new, brighter future for bike shops as well. 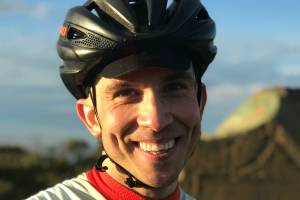 A shop needs only buy a single bike to become a dealer. The shop can then use that bike for demos, as an employee’s personal ride, or simply as window dressing. After that, THESIS offers a straight commission on each bike sold. On top of that, the shop can charge for the bike build and sell new customers any accessories they may need for her new ride.

The shop makes money and develops new client relationships. The consumer gets more personalized care and saves nearly $2,000 in the process. A perfect win-win? Well, almost. If there’s a hitch in the process, it’s that it requires patience on the part of the buyer.

While THESIS has a future goal of delivery bikes in four to eight weeks, it currently lists an eight- to 12-week turnaround on orders.

“We’ve found that [the delivery time] is an impediment for some, but not for others,” Jacobs said. “Some riders will want to walk out of a shop the same day with a bike. For that instant gratification, they’ll pay a substantial premium for a noncustom, factory-assembled bike. Other riders see the value in delaying gratification to get an obsessively curated spec, custom-configurable components, and a professional build and fit for less than the cost of the aforementioned factory-assembled bike.”

Time will tell if that has a lasting attraction for enthusiast cyclists. But if you’re in the market for a gravel/adventure bike, you’d be doing yourself a disservice if you didn’t explore the THESIS option.

Nick Legan started racing bikes at the age of 12. Since then, he has constantly pursued new two-wheeled adventures and gear. He is a former professional bike mechanic and the author of “Gravel Cycling: The Complete Guide to Gravel Racing and Adventure Bikepacking.” Camping, hiking, and fire-building are among his other favorite pastimes.