Gear Ties are an under-utilized outdoors accessory. Much like duct tape, these giant twist-ties can serve myriad purposes in the outdoors. 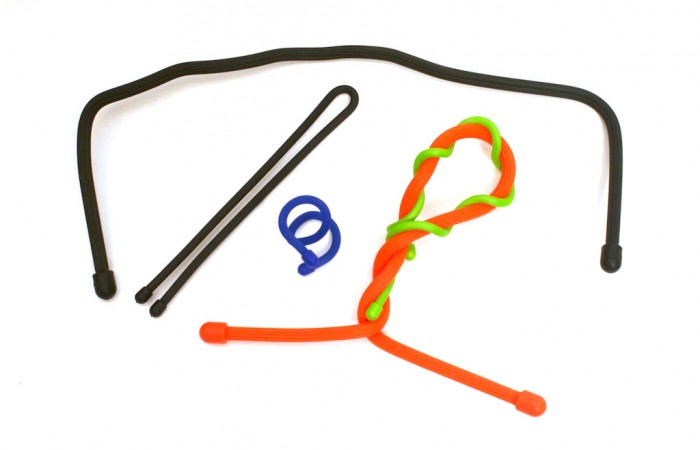 For the uninitiated, Gear Ties are flexible plastic strands that bend into many shapes. They can be used as connectors between basically anything that has some type of attachment point, and thus can be valuable multi-use tools that have nearly as many uses as duct tape. They cost just a buck or two each, making it affordable to throw them in packs “just in case.”

Whether we are on a road trip, crushing a multi-day adventure race, or going for a mellow hike, we rarely leave the house without Gear Ties from Nite Ize. They have taken the place of zip ties and bungees and have gotten us out of many a pickle.

Below are just a few of our favorite ways to use gear ties in the outdoors.

Everyone on the YogaSlackers adventure racing team carries at least one Gear Tie on their bike frame. They have helped keep water bottles on when our cages have broken, have kept lights in place on our handlebars, and they are awesome for bike-packing, as they keep everything together and secure during transport. We also use them to strap our skis and split boards to our bike frames when we go out on a bike/ski trip.

For a long time we have been using them to organize cords, heart rate monitors, and head phones. We even used two Gear Ties to craft a DIY camera tripod when we forgot ours on a recent trip.

Since then we have used them as a tripod for our iPad for watching movies on the plane, and for mounting a camera in obscure places — like a tree branch or onto our handle bars.

Strong and secure, Gear Ties can help attach bikes to racks, keep bikes from bouncing, and lock wheels in place. Case in point: in the excitement of riding our new fat bikes, we forgot to get a rack to accommodate the fat tires. We cribbed together a Gear Tie fix that worked so well we decided we don’t even need a new rack. Gear Ties can solve all kinds of rack-related problems and are often easier to use than bungee cords.

On New Year’s Day we completed 16 sports to ring in the first day of 2016. Six sports in, one of our snowshoes broke. We used one small Gear Tie to fix the broken rivet in under three minutes. We’ve also used them to fix a broken crampon in the middle of a glacier crossing.

Sometimes buttons fly off and buckles break unexpectedly. We have used Gear Ties for all kinds of “wardrobe malfunctions.” They have replaced zippers, buckles, and buttons on gaiters, pants, and backpacks during races and training days. They can also be used to keep your pant leg out of the chain when biking.

At home, after a few nights of camping in the mud, we strung up a clothesline to wash our ground cloths and gear. Gear Ties are an excellent way to attach all kinds of things to the line. Plus, they held firm and helped keep the ground cloths from blowing around and bunching up in the wind.

We’d love to learn more uses! How do you use Gear Ties?