Walmart, Kmart, and IKEA probably aren’t the first places you’d look for a trail-worthy bicycle. Unless you make a modest YouTube living testing box-store bikes, that is.

You might think there are a million reasons not to buy a bike from Walmart. But Kevin Watkins has cultivated millions of views and over 30,000 YouTube subscribers showcasing a few reasons why you might.

Nearly every week, he posts a ride review of an off-the-shelf box-store bike on his channel, KevCentral. He’s also spun this into an Amazon-influencer page for products he recommends. From Huffys and Schwinns to IKEA’s short-lived Sladda cargo bike and Walmart’s infamous full-carbon mountain bike, Watkins (better known to viewers simply as “KevCentral”) videos his experience, the good and the bad, on the trails near his northern Alabama home.

For a carbon mountain bike, $400 is not a lot of money. Unless you find it at Walmart. So is the Hyper Carbon X the crown jewel of box-store bicycles? Read more…

And surprisingly, he often finds a diamond in the rough — or at least a salvageable build he can later modify. (In fairness, he finds total lemons too.) So I caught up with him to find out why he loves box-store bikes, whether it’s ever a good buy, and what you can do to make a 200-plus-dollar Walmart bike a respectable ride.

GearJunkie: How did you get started YouTubing mountain bike reviews?

KevCentral: I started reviewing bikes on YouTube one and a half years ago when I got back into cycling after a 10-year hiatus — initially with a Trek Dual Sport I used for commuting. It didn’t take long before the MTB desires started to creep in, and I tried the DS on a mountain bike trail.

Commuting daily and riding trails for fun meant I was fully immersed in cycling on a constant basis, so it quickly took over my life.

That happened entirely by accident. A friend got tired of hearing me talk about riding and decided he also wanted to get into cycling. A few days later, he showed up at my door with a $99 Hyper Shocker full-suspension bike from Walmart.

Looking back, I was probably overly harsh on bikes from Walmart — at least at that point. But the Shocker experience went about as well as expected. Unknowingly, that started a quest: to find out if there is a useable big-box bike for beginner trail riding.

Most of us started riding on a big-box bike. And I’ve come to appreciate the role they play in getting people into cycling.

What’s your response to people who say you can’t buy a good bike at a big-box store?

There are instances where that may be somewhat accurate because there are certainly some questionable bikes I’ve seen on the shelves at big-box stores. But that’s not always the case. So I would ask them to define “good bike,” because the meaning of that can vary greatly from person to person.

I have a few big-box bikes that I consider to be adequate. 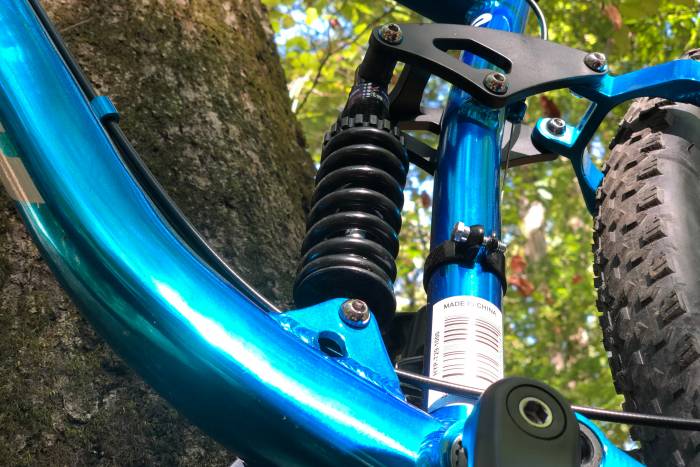 What do box-store bikes do well, and where do they fall short?

Recently, there’s been a trickle down, so features previously only seen on LBS [local bike shop] bikes are creeping into big-box bikes at a fraction of the cost. You also have a large variety of bike choices at big-box stores. There’s usually a bike type for any taste — all on the cheap.

The areas they fall short: The 3×7 drivetrain you’ll find on most big-box mountain bikes isn’t well-suited for mountain bike riding. They’re also super heavy, usually built with a specific look or feature set in mind where weight isn’t a concern.

But on a mountain bike, weight can really drag down the enjoyment.

What are some important things anyone who’s shopping for a box-store bike should look for?

First and foremost, you need to inspect the bike. The biggest problem I’ve seen is improper assembly and setup. Even a big-name bike can give a miserable experience if it isn’t set up properly. And sadly, this is an area in which most big-box stores are lacking.

If you do buy one, be sure to learn how to maintain a bike. Most of these bikes have little-to-no lubrication from the factory, and that can greatly impact their usable life.

Finally, do a little research and make sure you buy the best type of bike for your needs. It’s easy to get lulled into buying the flashy mountain-styled bikes on store shelves. They always have eye-catching paint jobs, and some are full suspension — all for cheap.

The reality is that each new feature has to either increase price or take away from something else to compensate. That’s how bikes end up with a front disc brake and a rear rim brake. Most people don’t ride on mountain bike trails, so make sure you avoid bikes with features you don’t need.

If you want to ride trails, you’ll likely need to spend around $200 plus to get something a light trail won’t instantly beat down. And make sure it has a threadless headset and a derailleur with a replaceable hanger.

Which box-store bike most impressed you right out of the box?

I have been most impressed with the Hyper Hydroform. For under $199, I found it to be better than anticipated out of the box — if properly set up. 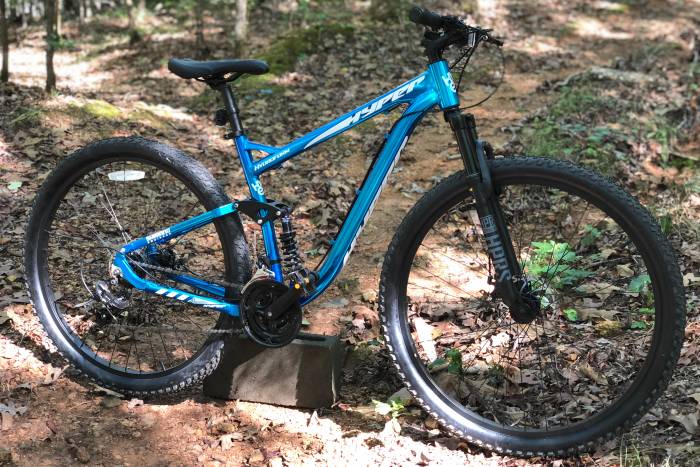 Are there any bikes that were doomed from the get-go and couldn’t be salvaged?

There are bikes I didn’t like, but I haven’t seen any that couldn’t be salvaged if given enough resources. The Pacific Evolution is a bike that was so far below my limited expectations that I still don’t think it’s worthy of any effort.

Have you ever been injured because of a bike’s poor quality?

How to Modify a Walmart Bike

Hands down the Hyper Carbon X from Walmart. I stripped the bike down to the carbon frame (2 pounds 13 ounces) and rebuilt it from the ground up. I ride it every week on the local mountain bike trails. And I shopped around for a month or two until I found deals on all the parts. 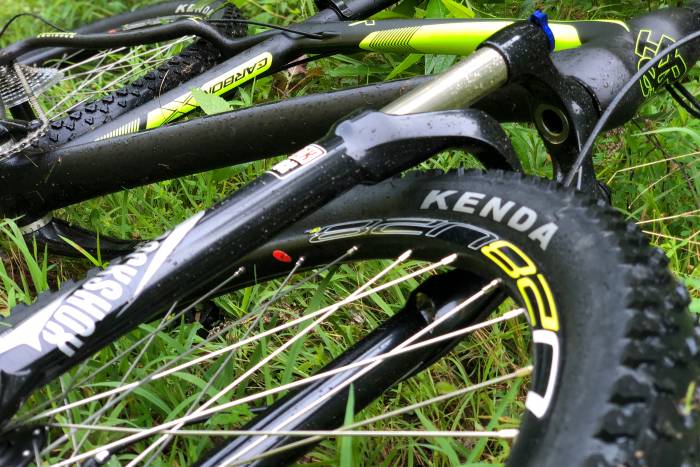 What key upgrades/modifications would you recommend to turn a cheap box-store bike into a trail-worthy machine?

I try to not make recommendations. I can only share my experiences and opinions. That said, the first thing is to start with a bike that can be upgraded. Some of the bikes sold at these stores aren’t suitable for upgrade.

I usually approach upgrades in this order:

Do you think, in general, the cost of most bikes is too high?

I always want bikes to be more affordable. The markup on bikes and bike parts is often extreme in my opinion. Look at wheels. It’s not uncommon to pay more for a new bike tires than a new car tires.

That said, there is also some truth in “you get what you pay for.” If you want an off-the-shelf, bulletproof mountain bike, you need to be ready to pony up some bucks and head down to your local bike shop.

Mountain bikes are where all the fun and flash is. But in reality, I only spend a fraction of my time on mountain bikes. I think I’m like most people in that respect. With few exceptions, we all like to think of ourselves as hardcore mountain bikers. But the reality is that most of us probably spend far more time riding places other than mountain bike trails.

With its jet-black finish, unassuming geometry, and absolutely silent ride, the Priority 600 commuter bicycle won't turn many heads. But it quietly houses the latest in cycling tech and boasts Porsche DNA. Read more…

In my case, much of my daily riding happens on commuter/hybrid bikes. Recently, thanks to bikes like the Priority 600 All Road, I am starting to also look at adventure bikes.

About the only bike that doesn’t get my attention is a dedicated road bike.

Do you have a local bike shop, and do you recommend people find one?

Yes, I do. I have a great local bike shop, and I shop there regularly. It’s always a good idea to seek out a good bike shop, even if you own a big-box bike. They can provide service far and above what you’ll get from most big-box stores.

Plus, a local bike shop is also a great place to find your next bike — something to work up to.