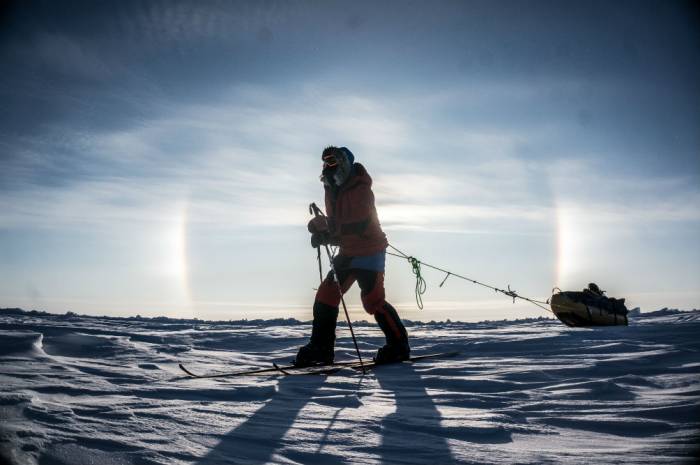 Dwindling rations and vast swaths of melting Arctic ice made Eric Larsen and Ryan Waters’s 2014 expedition to the North Pole a race against the clock. None of that mattered as the pair stared into “the coal black eyes” of a mother polar bear and her cub. 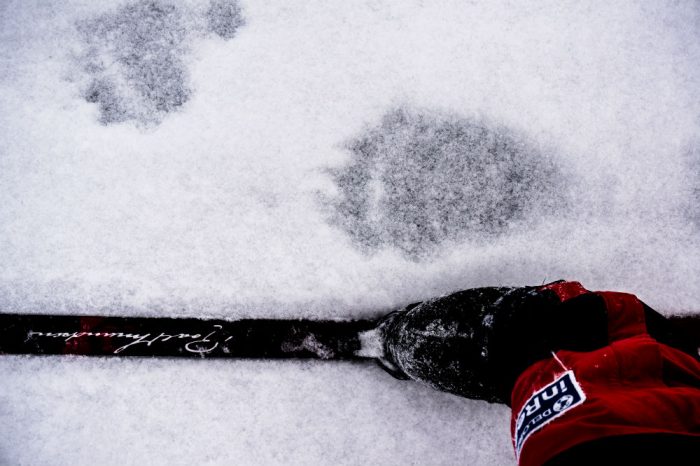 Larsen’s new book, On Thin Ice: An Epic Final Quest Into the Melting Arctic, chronicles the perilous weeks of what some consider the final human-powered trip to the North Pole.

As Arctic ice fractures and retreats, it becomes increasingly possible that the 500-mile trek won’t be replicated. In this excerpt, Larsen reveals how experience, teamwork, and luck saved their expedition — and their lives.

The following excerpt of On Thin Ice: An Epic Final Quest into the Melting Arctic by Eric Larsen is printed with the permission of the publisher, Falcon Guides.

‘The Sight You Hope Not To See’ 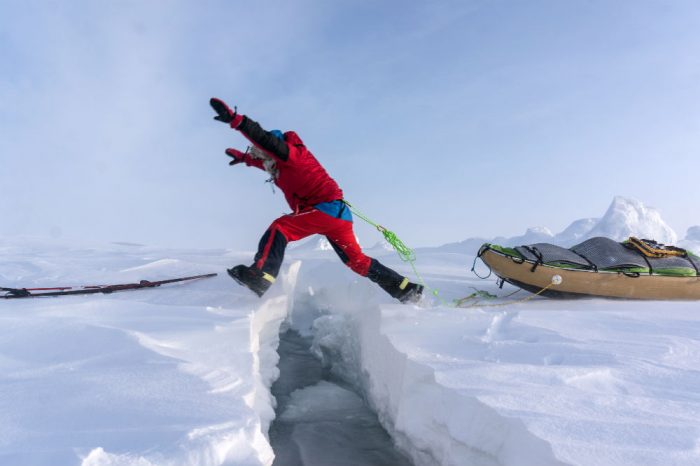 I DON’T KNOW WHY I chose that exact moment to halt. It wasn’t like some warning signal lit up, saying “Danger, Eric Larsen, Danger.” It just seemed like it was time. Each break from pulling the sled was gratifying; a momentary moratorium on our exhausting labor.

This stop was different, though, as I turned to see the one sight you hope not to see on your way to the North Pole: a full-grown mother polar bear and her cub ambling straight toward us, less than ten yards away.

The terror was immediate. One swipe from the 12-inch-wide paws of an adult polar bear can be the first step to a painful death. For a split second, I was frozen in my tracks as one thought jumped to the forefront of my mind. So this is how it ends, I am going to get eaten by polar bears.

The two bears had been following us, walking in our footsteps, after having picked up our trail about 1,000 feet back. They were sniffing the air, attempting to figure out what these strange, multicolored creatures were, and if we were edible. 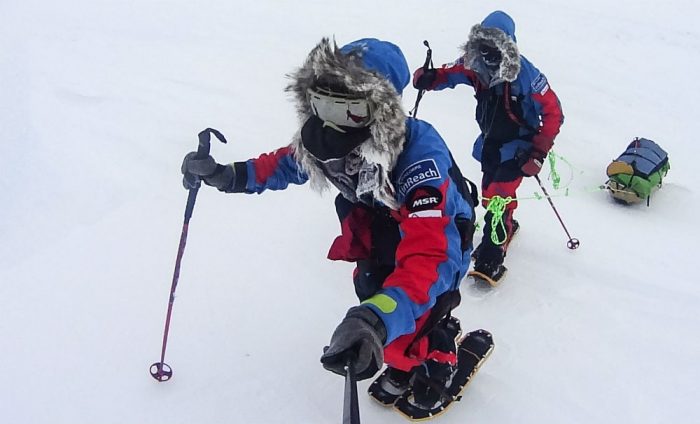 I quickly alerted Ryan and reached into my pocket to retrieve a pencil flare—a small signal flare that shoots a small explosive round into the air. Each of us kept one on hand for just such an occasion. As I fumbled with the flare, readying to fire, Ryan began to wave his poles and shout at the bears to scare them.

After 18 years in the Arctic, I knew this could either be a good idea or a very bad one—polar bears are inherently curious, and his ruckus might make us irresistible. The fates were smiling. The bears paused for a moment—we were probably the first humans they had ever encountered, and Ryan’s actions must have seemed very un-seal-like.

After a few seconds, they started back toward us. My heart was pounding. I frantically threaded the flare into the launcher and fired right over their heads. That stopped them dead in their tracks, but only for a few seconds. The yearling cub weighed several hundred pounds and was about three feet tall standing on all four feet, with two coal black eyes staring at us from its blank face.

His eyes were sweeping over us and his ears were lifted toward the sky. His head tilted a bit to one side and up as he sniffed the air, before he decided we were too interesting to pass up, and started toward us again, while momma stood watching. If we could not stop him, it was only a matter of time till she overcame her trepidation and decided to follow.

Ryan launched his flare, stopping the cub less than 15 feet from us. We could see the steam rising from the young bear’s skin, his nose moving slightly, inhaling our scent.

This was the moment when lady luck smiled down upon us. Our one firearm, a 12-gauge shotgun, was in my sled, the one we were pulling. Frantically, I grabbed it, and, with blood racing, fired the first round over the bears’ heads. It was a bear scare round, basically a very loud shell that shoots a bright, nonlethal, exploding round. That worked. 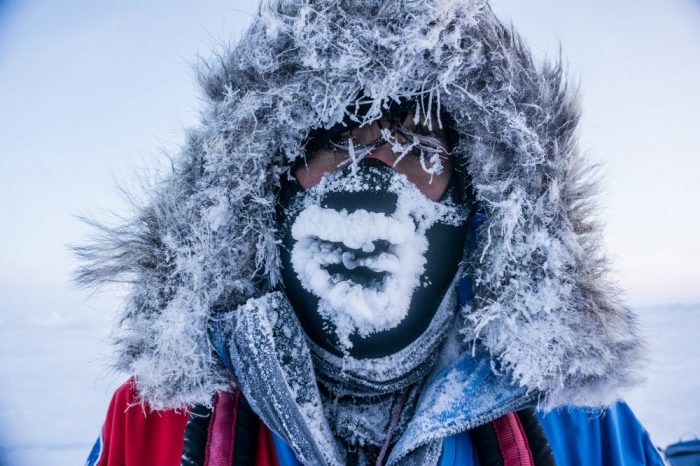 Both of them took off back the way they had come. We had answered their question: Yes, we were food, but unlike seals, we were perilous to them.

The whole encounter took no longer than three minutes. But when it was happening, time slowed, and minutes seemed like hours. As the adrenaline washed over us, so, too, did the reality of the situation. 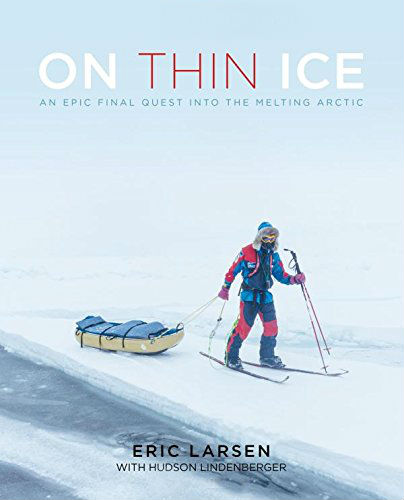 After five days of frustrations and self-doubt over our slow progress, for that one moment, everything went right. Our combined experience—my previous two North Pole expeditions and Ryan’s two Mount Everest summits—allowed us both to keep clear heads when staring down one of the largest carnivores on the planet. The fact that we were pulling my sled and not Ryan’s meant that we had access to the gun.

Stopping exactly when we did, before the bears were on us, when one swipe of their massive paws would have meant death. If any one of those things had not happened, we would have become a statistic.

If the struggles of the past five days had not driven home the message, the encounter with bears did. There was no question in either of our minds that we were in one of the most dangerous places on the face of the earth. 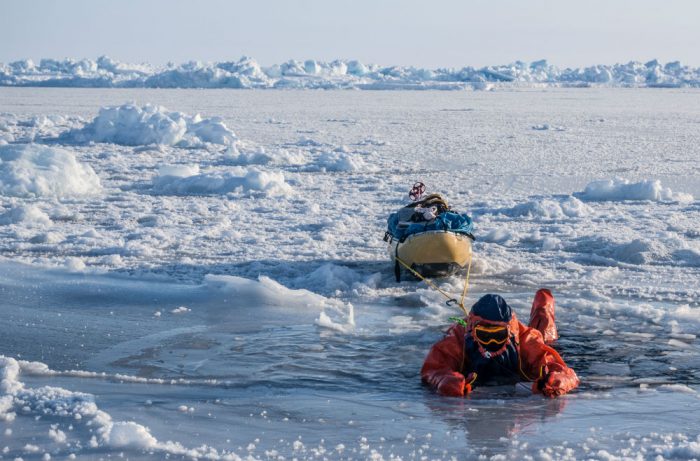 —On Thin Ice: An Epic Final Quest into the Melting Arctic by Eric Larsen ($17) is available on Amazon.