This film has all the ingredients for an epic winter adventure: a 60-year-old school bus, blower powder, beer, friends, and the open road.

Picture Clothing’s new film, “Made in Voyage: Adventure of the Honey House,” is a 26-minute ski film. But it’s less about the slopes and more about the journey to get there. It’s upbeat, with bright colors and picturesque wide-angle shots of snow-covered roads.

The film follows Cody Cirillo and Kellyn Wilson as they adventure into the unknown on their refurbished 1960s school bus. They’ll seek out snow through Utah, Washington, and British Columbia.

“With narration by Paddy O’Connell, the Wes Anderson inspired cinematography aims to be more than a ski movie,” reads the film description.

“This film is essentially the culmination of a 3-year art project,” Cirillo explained. “We purchased an old broken down bus, with no mechanical or construction knowledge, and made a rolling ski home that we couldn’t be more proud of.”

Made in Voyage Film Premiere

Thanks to COVID-19, Picture is hosting a digital tour of its latest film, complete with a virtual film premiere. Bring your own popcorn, turn up the volume, and get ready for ski season.

See tour dates here or below. North American tour dates and times are as follows:

If you can’t make it to the film tour premieres, the full film will release online in December 2020. 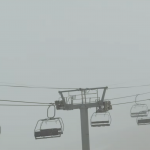 'Finally': What It's Like to Ski An Empty Mountain Post-Pandemic

Ben Buratti got the chance of a lifetime to ski the French Alps — when they were completely empty. Read more…