Alpine ski boots have used locking buckle systems for a long time. A Swiss bike racer and stunt pilot named Hans Martin was the first to patent buckles on ski boots in 1954 — and it changed the game.

Prior to that, all ski boots were laced like regular shoes. But Martin’s buckle design added far more stability and control. Almost every ski boot since has used locking buckles or some variation of them. It’s become the standard on the slopes.

But in recent years, boot brands and designers have started incorporating the BOA Fit System into AT ski boots. Fischer has the Travers CS, a touring boot with BOA, and Atomic made a similar boot called the Backland Pro CL. The SCARPA F1 has used a BOA system for several years. But now K2 is releasing its own ski boot with BOA, with one notable difference: It’s strictly an alpine ski boot. And it’s the first of its kind to incorporate the BOA system.

K2 called its Recon 120 BOA “the biggest advancement in skiing … in 60 years,” saying it will solve “all your boot-fitting woes.”

We’ll let you decide how accurate those claims are. But regardless, this is an exciting development. Not just because K2 is breaking some new ground, but because this could be the watershed moment when BOA breaks into alpine ski boots across the industry.

K2 packed a lot of technology into this boot, beyond the BOA system (although, that’s definitely the star feature). The Recon 120 BOA has a heat-moldable liner that provides flexibility and support in equal portions. It also has integrated internal and external J-bars to hold your heel firmly in place while you carve turns and slash pow.

The Recon ships with two heel inserts: one that’s rigid and responsive for better power transfer and a second “Harshmellow” insert that’s softer, damper, and can absorb greater impact.

A honeycomb boot board (which is the platform the liner rests on) keeps your feet nice and toasty. The honeycomb design retains heat 15% better than traditional boot boards, according to K2.

Then there’s the booster cam strap the brand used in this design. It can be cinched tighter than traditional power straps, which further improves control and performance.

All of that technology comes together to make a high-end, high-performance alpine ski boot. And we haven’t even gotten to the best part yet.

The Biggest Development in Skiing in 60 Years?

We’ve all gotten used to traditional buckles on our alpine ski boots. They aren’t perfect, but they do the job, in some cases very well. Most modern buckles allow users to adjust the length of the bail, to customize how tight each level of the buckle’s ladder feels.

But hot spots are still a problem for many alpine skiers, even if they’ve perfected their buckle fitting. K2 and BOA claim to have solved that problem for good.

The K2 Recon 120 BOA has a redesigned shell that “wraps” around the wearer’s foot snugly and consistently, evening out the pressure distribution. The BOA fitting system then tightens that shell down in 0.25 mm increments. If you overtighten, you can back off click by click, adjusting the tightness and fit to perfection.

The idea is, instead of one or two buckles that lock down on a single point atop the boot, the BOA system’s single-wire lace will squeeze around your foot evenly — like a boa constrictor. According to K2, that should minimize downward pressure and improve power and edge-to-edge control.

Durability wise? We hear that the K2 Recon 120 BOA is “overbuilt.” The dial system is made with a breakaway design that ejects the dial cartridge upon heavy impact. That way, the system avoids damage and skiers can easily pop the dial back on. Thanks to the cable it’s attached to, you won’t lose it in the snow, either.

And should the BOA system actually break, repair and replacement are simple. Especially with BOA’s lifetime guarantee.

Much like Martin’s locking buckle system, the BOA system incorporated into alpine ski boots could be a big deal. There’s a reason why this technology has become so widely adopted in active footwear: It works really well, and it’s light, minimalist, and very durable.

And, in the case of alpine ski boots, where the fit of the footwear directly affects your control, stability, and maneuverability, this development is a significant one.

Now that BOA has found its way into K2’s alpine boot designs, we’ll be excited to see the reception. Sure, there are already AT ski boots that use this technology. But if this proves effective, we may see it spill into more brands of alpine ski boots soon. 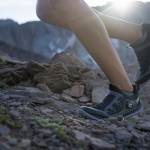 The BOA dial platform has graced cycling shoes and snowboard boots for years. But as they appear on more running shoes, brands like Saucony are redesigning entire uppers around the improved BOA Fit System. Read more…