On December 26, 2021, a backcountry skier’s dog triggered an avalanche when he left his owner’s side. Two avalanche safety-trained skiers rushed to the rescue and recorded it on a helmet cam.

Josh Trujillo and Bobby White were riding at Colorado’s Berthoud Pass when they saw an avalanche erupt 1,000 feet away. They were at the scene minutes later, probing for a buried dog alongside Scott Shepherd — the dog’s owner — and another skier who came to help.

Forty-two-year-old Shepherd was skiing with his group and his 2-year-old Chesapeake Bay retriever, Apollo, when they mistakenly veered off course. Instead of accessing the gradual terrain they sought, they found themselves standing above steep, loaded slopes in the Nitro Chutes.

Shepherd’s statements to the Colorado Avalanche Information Center describe what happened next.

Apollo — in an attempt to play as most dogs do outside — bounded away from Shepherd up a steep, rocky section.

Shortly after, the dog triggered an avalanche that buried him somewhere below.

Shepherd skied to the edge of the ridge where Apollo disappeared. But he couldn’t see him in the debris field. From there, he climbed down the chute and began the search.

Trujillo and White spotted the cloud from afar and skied to the site immediately. Shepherd had just started searching for Apollo when the two arrived. He told them the avalanche buried the dog, but the two alertly took out their avalanche beacons to scan for any buried people first. Once they determined no one was under the snow, they decided to start probing for the dog.

Trujillo described the slide as 50 yards wide and 300 yards long. If they were going to save Apollo, they would have to make short work of the long field.

According to the Utah Avalanche Center, digging victims out fast is key to saving lives; survival chances drop dramatically after the first 15 minutes.

On top of that, the party was searching directly under risky terrain. As they dug, they worried the ridgeline above could cut loose again. The three probed the snow to find a “needle in a haystack,” as White said.

Shepherd searched further up the slope, and another skier came up to help with the search.

In the video, White grows uneasy as the search surpasses 15 minutes.

“I think we need to get out of here,” he tells Trujillo. “That dog is dead … at this point, we’re recovering a dog body.”

A frantic dig ensues, and a third skier joins the party. Shortly, Apollo wriggles free and limps toward Shepherd, standing nearby.

“There’s no way I would have found him in time to get him out there because I was still way up the slope, making my way around,” Shepherd told ABC News. “I think they saved his life, and I can never be grateful enough for that.”

Aftermath and Canine Safety Lessons in the Backcountry 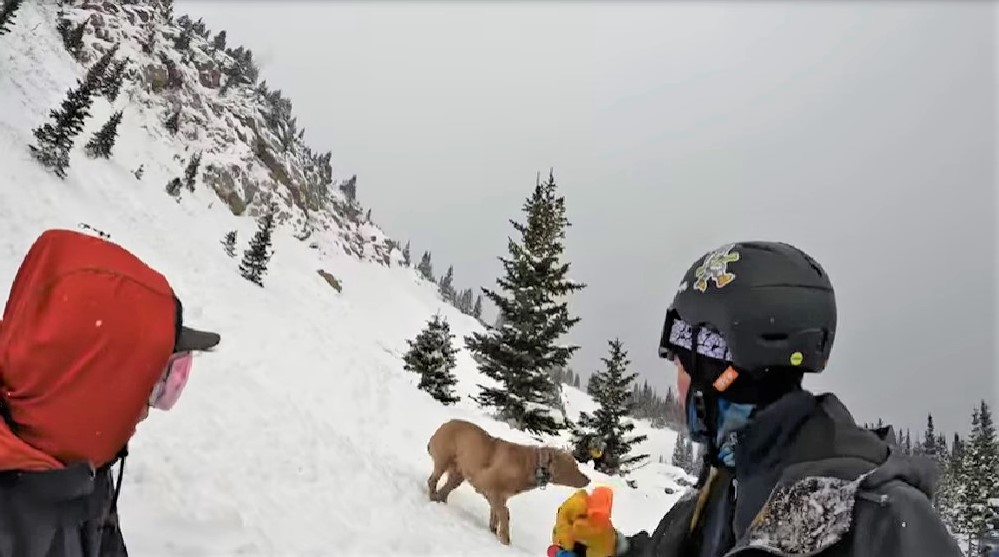 “Everybody knows that [backcountry skiing] is dangerous, and everybody takes precautions. But just realizing how one stupid little mistake could have drastic consequences, it kind of drives it home,” he said. “It doesn’t take much to steer off the course from safety to disaster.”

This beginner’s guide to backcountry skiing and snowboarding goes beyond the gear. It includes everything I wish someone had told me before I got into the backcountry for the first time. Read more…

Trujillo and White approached the day with a plan. Aware of the high avalanche danger in the Pass via the Colorado Avalanche Information Center, they decided to avoid avalanche-prone terrain.

Shepherd’s off-course accident with Apollo put them and others in the position of making the choice to help save a buried canine or deciding to walk away knowing the situation would likely put their lives in danger.

Though Shepherd took responsibility for the incident, the fact remains that his dog caused an avalanche that put rescuers in a tricky and potentially life-threatening situation.

Commenting on the incident later, Trujillo did not mince words: “We were very smart about our day and still got put in danger due to circumstances beyond our control.”

It’s imperative to note, however, that White, Trujillo, and the unnamed skier were by no means required or obligated to participate in Apollo’s search-and-rescue, though their decision to do what they felt was right, for as long as they could, likely saved the dog’s life.

He added that he and White plan to continue their avalanche safety education.

Final Thoughts From Our Team of Backcountry Skiers

GearJunkie’s in-house backcountry skiers advise an abundance of caution and emphasize the importance of obedience. Sean McCoy points out that some lines at Berthoud Pass are relatively safe — however, go 20 yards the wrong way, and it gets dicey.

For the non-skiers out there, here’s a bit of context. Avalanche terrain is complex. Some areas are extremely safe as long as you stay on a specific slope. But wander a few feet in the wrong direction, and you can put yourself in extreme danger.

Dogs are common as both tools and companions in the backcountry; many are even used by highly trained handlers as avalanche rescue dogs by resorts and SAR teams. So, yes, some dogs — paired with skilled handlers — are safe. But the margin for error is small and accidents do happen.

It’s also important to understand that dogs should never wear beacons in the backcountry, as rescuers wouldn’t be able to distinguish the beacon of a dog from potentially buried people at an avalanche site.

“There are safe, low-angle lines at Berthoud. But even a short excursion — the kind of distance a dog can cover in seconds — could put you in position to trigger an avalanche that could wipe out another party below,” McCoy said.

“The lesson here is that if you can’t control your dog 100% of the time, leave it at home if you are headed to avalanche terrain. Why put your best friend in danger?”