This wing won’t let you fly, but it sure will help you stand out on the ski hill. 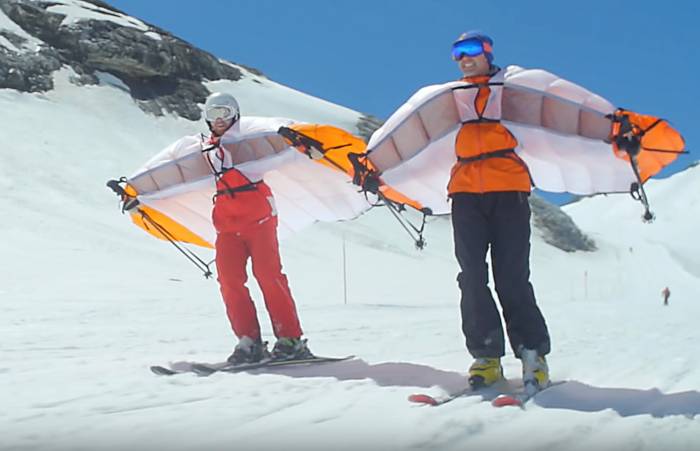 Despite an increasing number of deaths in the sport, as well as an outright ban on the activity in one of its epicenters, the wingsuit trend continues to take off. A new brand launched a wingsuit-like product, but it won’t lift you off the ground.

The brand claims the Wingjump will change your skiing. We’re not so sure. It might earn you the new nickname of Jerry, or be awesome. We haven’t tried it but are skeptical.

Wingjump, according to the brand’s Indiegogo fundraiser, “provides new sensations of skiing for everyone.” Exhilaration? Humiliation? Hmm.

Ok, without trying the Wingjump, we’ll try to withhold judgement. It might be awesome. To be fair, the brand claims it will “enable skiers, regardless of their level, to combine the magical sensation of being lifted, with that of skiing.”

Actual wingsuits used by expert skydivers and BASE jumpers definitely work, allowing humans to get closer and closer to actual flight every year.

The Wingjump doesn’t claim flight – not even close – but it does play off the fashion of wingsuits, and the largest model certainly looks like it would create a fair amount of lift at high speed.

It’s worth noting that these aren’t the first “ski wings.” Skiers are an inventive lot, and thus other, questionable models exist.

How some lift translates into actual skiing, well, again we’re skeptical. Good skiers spend plenty of time in the air, no wings needed. The Wingjump isn’t cheap, either. Prices range from about $110 for the smallest kid’s model to more than $400 for the Active Carve model that is meant for experienced skiers.

Ultimately, this thing looks pretty silly. But while we’d be a little embarrassed, we’d be willing to take one for the team and strap one on – for science!

For others who want to try the latest gizmo, here it is. We won’t be surprised to see them strapped to jester hat-wearing kids right around Christmas Break.

Up Next: ‘Shacket’ Season Is Upon Us

Saving…
‘Shacket’ Season Is Upon Us
M.A.X. Pass: 38 Mountains, One Lift Ticket
×