High froth, fresh tracks, and mucho powder: In this new Quiksilver film, a team of snowboarders ride locations from the U.S. to British Columbia to Japan.

The film features Austen Sweetin, one of the best all-terrain riders in the country. At just 25, Snowboarder Mag named him one of its top 10 riders. In 2017, he got to ride with Travis Rice in the full-length snowboarding film “Depth Perception.”

The film is lively, frothy, and high on all sorts of snowboarding stoke. It’s the perfect sort of film to get you excited for upcoming snow. 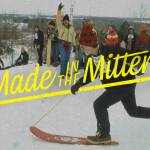 The Origins of Snowboarding: 'Made in the Mitten' Is a Must-Watch

Snow + surfing = snurfing. And it's epic. Here's the story behind of of our favorite snowsports. Read more…