If you thought the only way down the world-famous Chief in Squamish was on rappel, think again.

In Squamish, a recent snow squall buried local skier Eric Carter’s driveway and gave him an idea. If there was this much snow here in town, might there be enough in the North Gully of the Chief to ski it?

So he, Paul Greenwood, and Chris Christie drove up to find out. The result was a rollicking run down one of the world’s most iconic rock climbing sites. Executed in amusing 8-bit, the group’s quick video chronicles the first descent.

The skiing itself looks brutalizing, in ’90s video game style. The game characters (er, skiers) edge laboriously down the tight chute. The occasional rappel keeps it interesting, as the “game” measures progress on the “Shred Level Complete” bar in the top left.

In essence? This new ski descent could be a game-changer. 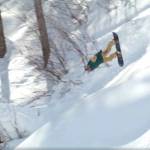 The strange title of this work by GoPro starts to make sense once you get used to the candor of the merry pranksters on board. Read more…