Romp Skis’ new Osos were designed to provide an edge over vertical slopes and the rugged unknown. But they’ll perform just about anywhere you take them.

Skis don’t ever make the skier. But when lifelong, dedicated skiers make the skis, riders can gain a valuable edge over the mountain. That’s what Caleb and Morgan Weinberg of Romp Skis in Crested Butte have been striving to create in every pair of skis that has come off their grinding line since they started in their garage in 2010.

At the end of the 2020/21 ski season, Romp announced its updated line of “Romp Ready” skis —among them their new Oso.

With a new ash and aspen blend core and slightly modified shape, the Oso would be a stiffer, “burlier ski” than previous iterations. But they’d accomplish this without having sacrificing versatility, according to Morgan Weinberg. The Romp website calls these skis the “Decisive Executive for the Rugged Unknown.”

So, when the factory-fresh demo pair arrived on my doorstep, I was immediately excited to get them mounted, put them on snow, and see what they could do.

The Oso at First Glance

First off, I’ll say this: these skis are sexy. The simplicity of the art, the deep blue of the top sheet, and fuchsia bear claw marks cross-hatched across the tips make for an instantly recognizable ski. 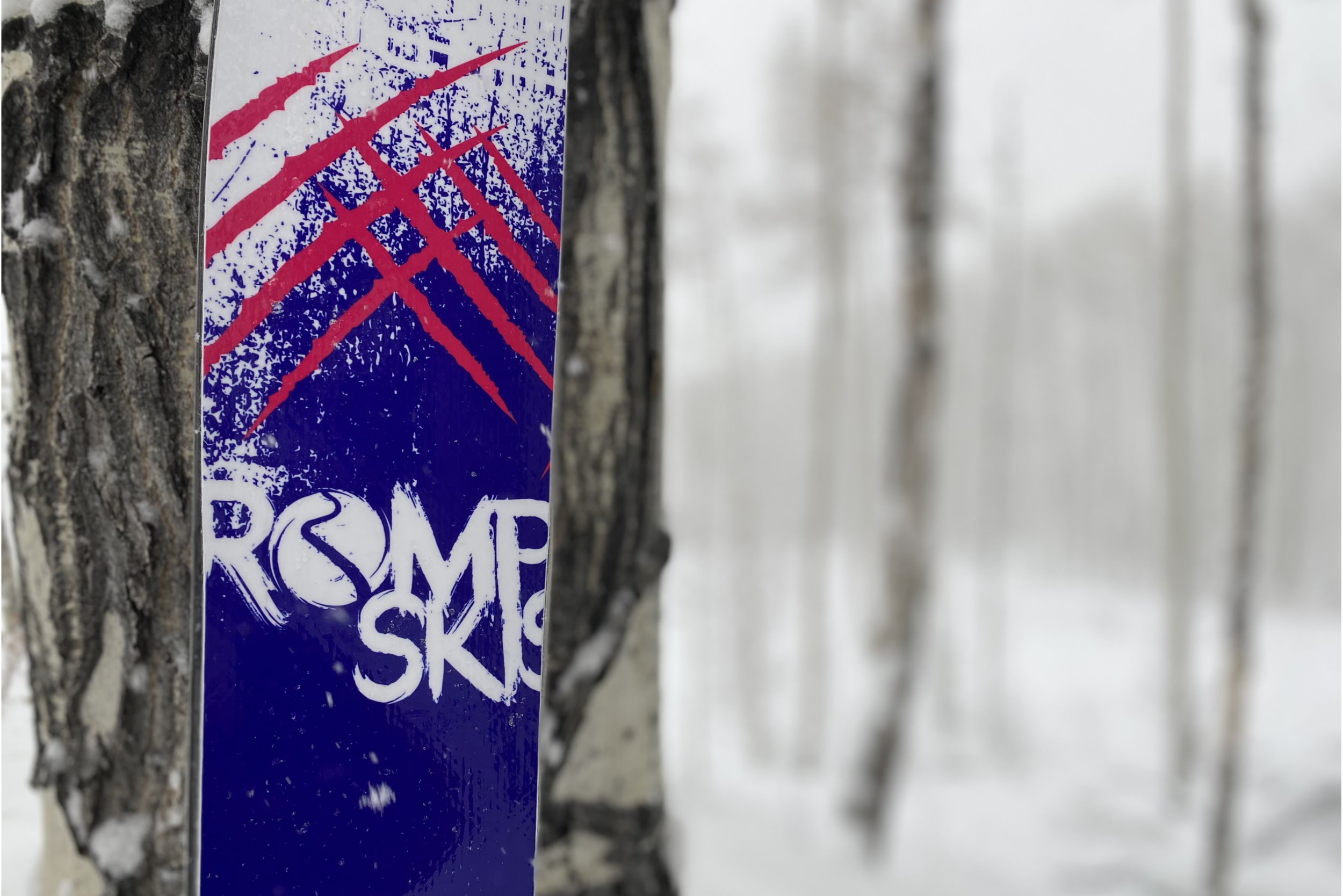 But looks are nothing when compared to performance. And I was curious how these Osos were going to feel carving on groomers, ripping up moguls, in the trees, in powder, and on steep chutes and faces.

Here are the basic specs of the Osos I tested:

Admittedly, I am not usually a fan of straight-cut skis. They typically aren’t as agile or fast to turn as the all-mountain boards I normally ride. But the Osos are marketed as rugged all-terrain skis that “excel on powder, piste, and everything in between.”

We’d see about all that.

First, I hit some groomers to get a feel for the edges and the turning radius. The 185cm Osos have a 23m radius, which naturally makes long, arcing turns.

And despite the increased stiffness from the new ash/aspen core, I was pleasantly surprised by the Oso’s agility. They were perfectly damp, lifting smoothly out of the apex of one turn and nimbly into the next. They slashed through crud and variable snow effortlessly.

The straighter sidecut of the Oso also lends itself well to getting stylish (for the steazy-inclined). The edges break free easily, making them ideal for buttering up on flatter slopes.

On moguls, I quickly realized the Oso is as much a technical ski as it is a downhill carver. They felt comfortable navigating more complicated terrain. And they did that even with a straight sidecut and a longer radius.

After a while, though, I gave up on flossing between the moguls and made a few runs charging over top of them. I let that sidecut have its way, skipping over the terrain in long snaking arcs.

Again, the Osos had no problems with this. They actually felt really steady at the higher speeds (the only limiting factor being the stamina of my legs).

At this point, a key feature of Romp’s Osos was becoming clear: the steeper the terrain, the better these skis perform. Which is exactly what Romp created them to do.

According to the brand’s website, they “designed the Oso 106 to navigate Crested Butte’s vaunted North Face.” And with that new ash/aspen core providing such stability and control, riders can shred vaunted terrain like that with total confidence.

It took a little longer to find my flow in the trees on the Osos. That straight sidecut wanted to accelerate and stretch my turns out when I needed them to be short and whippy. I caught myself brake-checking a little more than I like to at first, but it was just a matter of adjustment.

After two or three runs through the woods, I started to get a hang of the rhythm and pace of these skis in the trees. And when I did, the flow clicked.

As for powder skiing, the Osos won’t float you like a fat pair of front-rocker boats. But they can stand up with most other all-mountain skis in deeper snow.

The 106cm underfoot width is just wide enough that the skis naturally lift when the snow gets deep. Because of this, I did have to sit back a little and consciously keep the tips up to remain afloat on any powder slope flatter than 45 degrees.

On Osos: The Final Word

Romp’s new 2021/22 Osos are ideal everyday, all-mountain skis for skiers who want to charge the steeps and rip on-piste.

They might not replace your powder skis, but for just about everything else they perform at a really high caliber. Especially on the kind of vaunted alpine terrain for which they were designed.

If you’re looking for a ski you can ride anywhere with an extra edge on steeper terrain, look no further than the Oso.

The Best Face Coverings for Skiing & Snowboarding in 2022

We've tested the best face coverings for downhill skiing and snowboarding in 2022 to keep you warm and safe all winter long. Read more…

Up Next: Record California Snow Could Bury Thru-Hikers’ PCT Bids