Weston Backcountry founded a brand on snowboards. But for fall 2020, it will launch a new line of skis. We got a first ride on the skis it dubs the Savage and Grizzly.

Weston Backcountry has been making a splash in the snowboard industry since its inception a little over 5 years ago. Its commitment to the splitboard lifestyle has turned more than a few heads, and its influence has expanded from their humble offices in Minturn, Colorado, to international markets around the world.

Looking to expand its offering to all backcountry rippers, Weston started showing off a new line of skis (coming next season) at demo shows around the U.S.

Weston Backcountry is a small grassroots group of folks based mostly in the Vail Valley of Colorado. If you’ve spent much time along the I-70 corridor you’ve probably seen its mobile office/tiny house/showroom.

Affectionately known as “The Tiny,” Weston pulls it around to some of the premier resorts and backcountry trailheads nationwide.

Weston let me spend a few days riding its two new ski offerings, and both pairs thoroughly impressed me. The Savage skis are pegged as Weston’s “everyday touring ski.” I got to ride the skis in the 176cm length, which measured 105mm underfoot, 132mm in the tip, and 122mm in the tail with 15 m of sidecut.

These skis were poppy and playful and loved to get airborne when the time was right. The soft rocker in the tip and tail kept me up in the powder while the binding plates, and camber underfoot inspired confidence in the crud and kept chatter down on hardpack.

For a company that does primarily snowboards, I was also impressed with the weight of the skis. The pair I rode came in right at 3.5 pounds without bindings, on par with other top-of-the-line backcountry touring skis like the Icelandic Nomad 105 Lite and the DPS Powderworks Wailer 100 RP.

I also got to take a few turns on Weston’s new powder ski, the Grizzly. This pair has a similar construction to the Savage with a paulownia wood core, aluminum stringers, and a carbon topsheet but in a wider offering.

The 176mm pair measures 118mm underfoot, 144mm in the tip, and 134 in the tail and weighs in at only 3.8 pounds without bindings. These dimensions mean this is the ski you want to save for those big pow days.

But when you do get those big dumps, the Grizzlys want to be ridden aggressively. As with the Savages, the right combination of flex in the tip and stiffer camber underfoot made for an enjoyable ride.

My intrigue with Weston’s new ski offerings extended beyond the ride quality. Weston Backcountry takes its name to the next level by not only selling pow-slaying touring gear but also going way above and beyond in its commitment to give back to the places its employees love to ride.

According to Sean Eno, Weston’s director of marketing, 10% of profits from the sale of skis up to $20,000 will be donated to The American Institute for Avalanche Research and Education (AIARE) to promote avalanche scholarship.

Weston has even gone so far as to co-brand both the Grizzly and the Savage with the AIARE logo.

I asked Eno why a snowboard company wants to break into the ski market.

”With us having our roots in the backcountry, and our desire to support the full backcountry community, it was a natural progression for us. Half of our touring partners and friends are on skis. So to create a product for backcountry skiers was an easy leap,” he said. 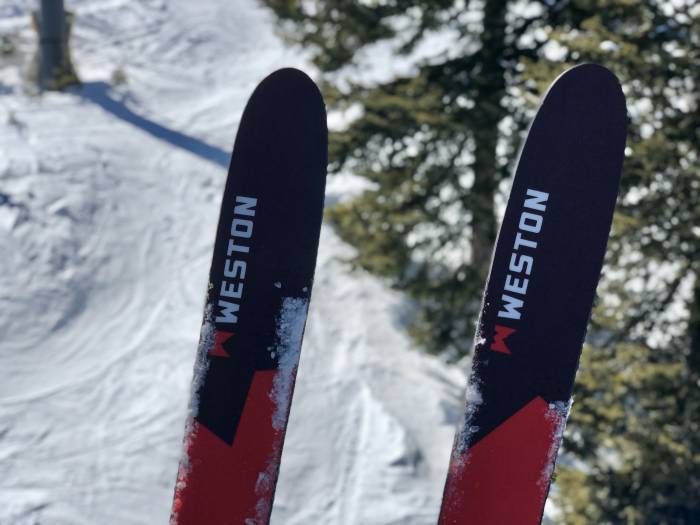 From my interactions with the folks at Weston, I came to realize that the company ethos is less about what you ride and more about where you ride. Ski or snowboard, Weston wants to do its best to provide you with an awesome and safe backcountry experience.