What do you do when endangered and undiscovered species reside within labyrinths of treacherous caverns all but untouched by man? Or when crucial archaeological finds lie hidden in the vast sands and mountains of the Oman desert? Adventure Science expeditions marry the quest for discovery with the will to endure. 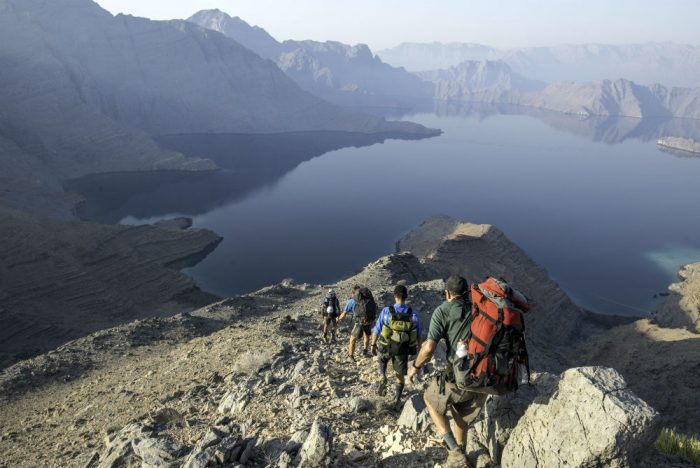 Subsisting on energy bars and freeze-dried meals, adventure photographer Luis Moreira slogged his 33-pound pack for 10 days across miles of rocky limestone desert in northern Oman – searching for the heretofore undiscovered ruins of bygone civilizations and a glimpse of the critically endangered Arabian leopard.

“The local population has long migrated to small coastal towns and to seasonal fishing camps which have created an interesting dichotomy between the activity on the water and the history up in the mountains,” Moreira told us.

“Many of the local individuals we spoke with are aware that village ruins exist up in the mountains but most cannot say where. Even the Omani government hasn’t properly documented the location of many of the sites we visited.”

Moreira was part of a unique squad of scientists and dedicated endurance-sports athletes whose mission is to explore the most desolate and rugged landscapes in the name of research and discovery. It’s called Adventure Science.

The Musandam Oman Expedition was just the latest mission for the Canadian-based research outfit that was founded in 2008 and is led by 37-year-old geologist and elite adventure racer Simon Donato.

Donato leads the group, which he runs as a labor of love. “I don’t make any money off of this – it’s all personally funded; the participants too – I want people who are serious and have skin in the game, not just looking for a free trip.”

Along with a team of ultra runners, ice climbers, mountaineers, cyclists, and any other disciplines that benefit the mission, Donato and his hand-picked crew embark on one or more expeditions each year that require both technical skill and extreme physical endurance.

The candidates tend toward endurance athletes who might have 100-mile ultras or multi-day adventure races on their resume. The physical ability and mental fortitude forged from these activities is used on long days in the field, where many miles must be traversed and wilderness navigation is required.

“After I retired from adventure racing and began diving into archaeological expeditions, I realized there were a ton of complimentary attributes adventure athletes had that researchers could utilize,” Donato said.

“A lot of these discoveries are made in the most remote and difficult environments,” he went on. “It’s a lot easier to get to and navigate these places if you’re fit and can endure – basically, working with these athletes you get more bang for your buck.”

While the organization positions itself as a research initiative, Adventure Science has also embarked on more ominous quests into unsolved and tragic mysteries.

Last summer, Donato and a team five – some on their first Adventure Science mission – hiked up the rugged peaks of the Sierra Nevada mountains in search of clues information of wreckage spotted from aerial reconnaissance following the 2007 crash of famed aviator Steve Fossett.

Ultimately, the team uncovered several other known wrecks and previously unidentified areas of interest – the findings were reported to local authorities.

Sometimes, that data can be too difficult to obtain. In 2014, on a two-week mission to create the first map of Madagascar’s Great Tsingy cave systems and identify new species of tree lemurs, Donato and his skeleton crew of two required helicopter rescue after the brutal terrain prevented them from returning to base camp.

Beginning this year, Donato is attempting to prevent further emergency bail-outs by setting up an informal “crash course” training facility on old farmland he is retrofitting.

“There’s no formal scientific training necessary,” he said. “I’m hoping to use this farm as a short-course to prepare new members for whatever we will encounter.”

No news on the next mission, but podcasts and new adventures will be updated on the Adventure Science website if you think you have what it takes.

Up Next: Love Running Downhill? Then You’ll Love This