It was June 2nd when the post went live on his personal blog. Sean Foster titled the essay bluntly as “CHANGES.” A photo of a lone carabiner clipped to a bolt, dangling in space over trees, was the visual to accompany words that outlined a new plan on life. 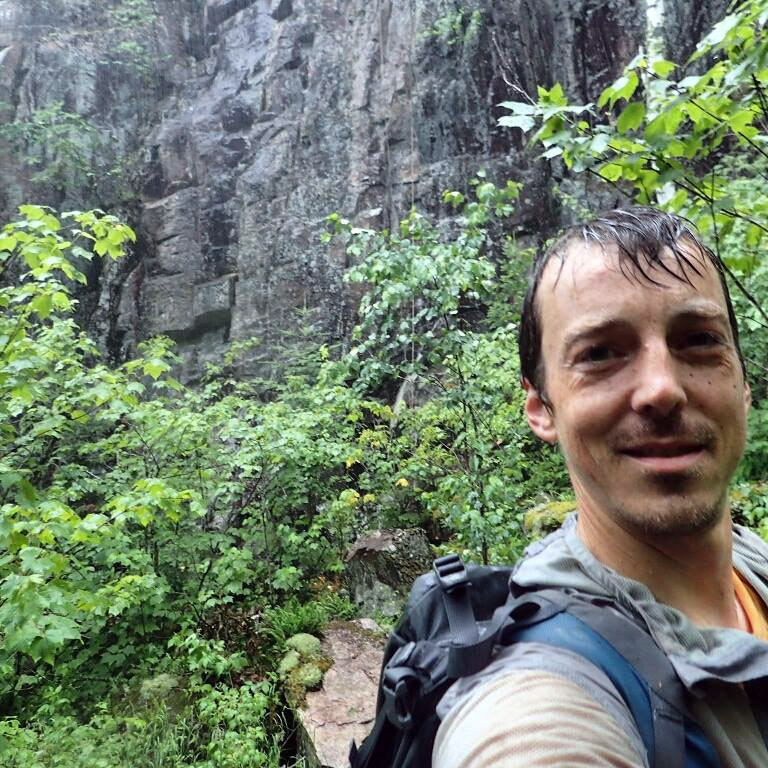 Foster, a climber and a father of two teenage sons in Minnesota, hit a breaking point. His life had become stressful, bordering on panic-attack-inducing, he wrote, where every day he would arrive at work, “take the stairs to the 5th floor, pull open the stairwell door, turn into the long hallway to my office, and sink a little more into despair.”

Hitting a chord many Americans can likely relate to, Foster summed it up: “For years now, I have toiled in a cubicle world doing unfulfilling work in a secure, but passionless, environment.”

A few hours north from his home, in the woods near a backwoods lodge called Nelson’s Resort, Foster would seek a new start. It’d be a long way from anything, near the Ontario border in northern Minnesota, outside of the town of Crane Lake.

But his reboot was focused, his plan as far outside a cubicle wall as he could get. He wrote, “I’ll primarily be exploring, cleaning, and climbing a cliff line, known as M&M Hill by locals, that has long since been forgotten by climbers.”

Now, a few weeks into his new life, Foster has settled into something of a rhythm. He tends bars at the resort at night, and each day he climbs, cleans rock, clears brush for trails, and generally soaks in the freedom of shedding an old life for something new.

We caught up with Foster last week. “I am now two months into my [new] life and have much more of a grasp of what I am doing,” he said, “which is not to say that I have a full grasp of anything at all, just that I have a little.”

Foster answered a few questions after a weekend of climbing with friends at the crag he is developing, M&M Hill.

Hope you are well! Describe the past few weeks of your life.

The first few weeks were quite surreal. I quit a job that I held for over six years in the Twin Cities, parted with about 90% of my belongings, bought a minivan, and moved to a fishing resort in Northern Minnesota, Nelson’s Resort. When I first arrived, I had to learn to be a bartender right away. I had been a barista for many years, so mixing drinks in front of people wasn’t entirely new, but all the recipes were new. Fortunately, resort customers were pretty laid back and understanding about my novice abilities.

During the days, I would head a couple miles up the road to M&M Hill and develop climbing routes. Then, every night I would head into the bar. It was mid-June when I arrived and the days were hot, humid, and buggy. Like, mutant buggy. Every day was like going to battle in the forest and I never knew which enemy would be the strongest, ticks, mosquitoes, horse flies, gnats, and more were out in force daily.

Has it been liberating? Scary?

Leaving my life behind was more liberating than scary. Every day I wake up, it is a choose-your-own-adventure day. Do I want to climb? Develop routes? Scout new locations? Swim? Kayak? Sure. All of the above, sometimes. The difference between spending eight hours a day at a computer doing bookkeeping to spending every day outdoors was pure freedom. There were some days that I would sit on top of the cliff looking out over the forest and just cackle at the sky. Is this really my life now? Yes, it turns out it is.

The scary part was actually before leaving it all behind. The decision to quit my job, to sell my furniture and dishes, to give away CDs and movies and books. Then, the day came when I drove away. That was the moment of liberation.

What are the biggest changes?

It’s all a change. I had a fairly set routine in life before June of this year. Nothing I’m doing up here is the same as it was. I don’t watch shows like I did, keep up on email or social media quite the same, spend time with friends, go to the climbing gym. Nothing is the same.

Will your decision to move and reboot affect your life going forward, after this summer and beyond?

Yes. Definitely. Now that I have made the move to nomadic life, I’m going to do some things I’ve thought of for a while. This winter, I’m hoping to travel back to Maryland where I grew up and help my parents start preparing for retirement. They recently bought a lake home in South Carolina to retire in and would probably benefit from some help getting that house ready to move into as well as packing up 30+ years worth of living in my childhood home.

I’ve already decided to come back to Nelson’s Resort next spring and continue to develop Crane Lake climbing while tending bar, and they are happy to have me back.

How is the climbing?

The climbing has been great. For me, it is all virgin rock. I’m cleaning and climbing and discovering new routes every week. The rock is all crazy old granite and it is in every direction. I’ve been focusing on M&M Hill on Nelson Road so far, but every so often I go exploring and find new rocks and cliffs and crags for future development.

What is the potential of the crag?

M&M Hill itself has potential for 50-70 climbs, as an estimate. At this time, the Hill has about 30 established climbs. I have put up the majority, but have had a few guest developers come through and put up a handful of them. After the first month passed, I began to get visitors and my development routine waned. Once I catch my next wind, I’ll be back out at the Hill on a regular basis and think we’ll easily be pushing 50 routes.

What does it take to develop a route on this crag?

Developing a route is an investment of time and energy. I like to walk the base of the crag and look for features, holds, or lines that spark my interest. Then, I hike to the top of the cliff and try to find where that line was and lower into it by rappelling on a rope that I have anchored from above. On the way down, I lightly clean off lichen, moss, dirt, and loose rock. When I reach the ground, I start to climb back up the potential route while self belaying. If at the end of this process, I feel the line is worth developing, I set out to do the real work. I lower down again with wire brushes and scrub the rock vigorously.

I climb back up the route looking for potential hazards that I need to remove or work around. After a few passes in this fashion, I dump all my tools at the base of the route tied up to the end of my rope. I then climb the route again as if it is a sport route and consider where bolts should go to protect a climber from falling to the ground or on a shelf. I make sure that quickdraws won’t sit over edges or interfere with key holds.

Once I have the bolt placements dialed in, I haul my tools to the top of the route and start bolting from top down. Once on the ground again, I clean up and move on.

What do the locals think of you?

At the start, the locals didn’t know what to think of me. Climbers have their own language and much of what I said drew blank stares. As time went on and I started to have visitors who sat at the bar with me and talked excitedly about what was happening, folks at the resort started to believe that, while they didn’t fully understand, what I was saying was true. Crane Lake is full of potential climbing and it is a close enough drive to become a future Minnesota climbing destination.

Now, I have people come in to the bar regularly and ask, “are you the climber?”. Usually a lengthy conversation follows and people are getting excited to try climbing under my supervision sometime in the future.

What’s your advice to someone stuck in a job they hate?

Oh boy. I don’t know. It took me a long time to leave mine. I searched for other jobs, applied, interviewed, and got nowhere. I wanted to leave my job for quite some time and found a way to do it in the unlikeliest manner. When I was immersed in the distaste for my job, I tried making lists of things that made it worthwhile; good benefits, plenty of time off, comfort that I was needed and not likely to be laid off. That would get me through for a bit, but the dislike would inevitably return.

My advice is to stay true to your dream. Keep dreaming. Let your dreams pour over you. Profess your desire to follow your dream loudly. As Paulo Coelho writes in the book The Alchemist, “When a person really desires something, all the universe conspires to help that person to realize his dream.”

Some days I am very cynical and don’t believe in anything, but this summer has been one piece of evidence after another that Mr. Coelho is correct. The universe conspires.

What are your plans beyond this summer?

I’m going to stay at the resort until it closes in mid-October. After that, I’m heading back to the Twin Cities for a bit to spend time with my kids and their mom. Then, I hope to head to Maryland and South Carolina with my folks and maybe bounce around seeing friends in New Hampshire and visiting the sandstone I’ve heard so much about in Tennessee.