Most explorers who have tried to cross Antarctica solo either died or needed rescue. Despite that, two trekkers are attempting independent crossings right now.

Colin O’Brady and Louis Rudd began expeditions earlier this month to cross Antarctica. They both are attempting their routes solo and unaided. 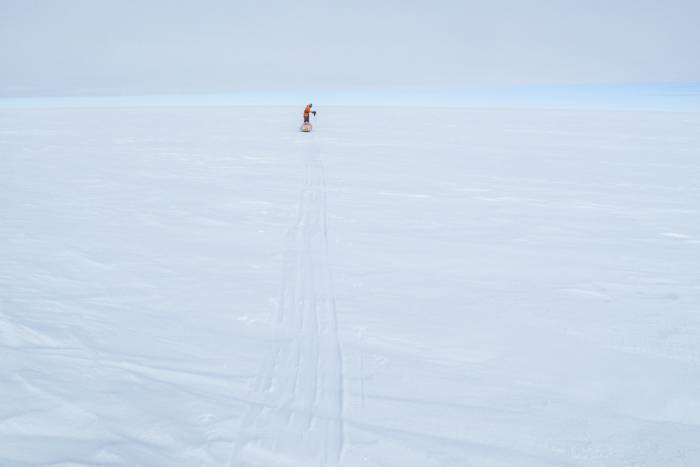 Both explorers had made individual plans to cross the continent but from opposite ice shelves. Those plans changed on the fly.

Originally, O’Brady’s planned route was 1,000 miles in 70 days from the Ross Ice Shelf at the southern coast of Antarctica, off the tip of Chile, to the Ronne Ice Shelf.

Rudd’s attempt was initially designed in the opposite direction, beginning from Hercules Inlet on the Ronne Ice Shelf in the Weddell Sea and concluding on the Ross Ice Shelf around 75 days later. The journey was meant to be a tribute trek to his friend Henry Worsley, who died during a 2016 solo in Antarctica.

However, plans changed. This is common in the wilds of Antarctica, according to renowned polar explorer Eric Larsen, who previously guided O’Brady to the North Pole and is planning his own solo speed-record attempt.

On November 4, a Twin Otter plane dropped both explorers a little farther in on the Filchner Ice Shelf, also known as the Messner Start. That means a shorter trek for both — and in the opposite direction of Rudd’s initial plan. The two were captured on Instagram together.

“As it stands right now, they are traveling within sight of each other,” Larsen said. “It’s almost like they’re racing.”

While the feats cannot be downplayed, Larsen explained the route change.

“The new route is like climbing Everest via the South Col versus West Ridge. You can still get to the summit, but the process is much easier,” he said. “In this case, the difficulty factor in crossing Antarctica comes down to one simple variable: distance.”

Despite the change in plans, the route remains a daunting task. Both are facing two months on ice alone, with only their thoughts.

They could be skiing up to 12 hours a day in wind that could hit 100 miles per hour. On a good day, they might cover 13 miles. And the route’s high points are 10,000 feet above sea level.

Despite his young age, Colin O’Brady, 33, is experienced at worldly exploration. Two years ago, he climbed to the top of the highest peaks on all seven continents in 132 days, setting a world record for the fastest time to complete them all.

He also knows how to manage the -40 degrees F that Antarctica could bring. O’Brady has also made “last degree” expeditions to the North and South poles. And he recently returned from a month in Greenland, where he practiced sliding his 400-pound snow sled over 400 miles.

Louis Rudd, a captain in the British army, wanted to walk in the footsteps of Henry Worsley, the man who first taught him about polar exploration. In fact, in 2011, the two reenacted a century-old race to the South Pole between Norwegian and British explorers.

Sadly, Worsley died after his 2016 solo unaided attempt. At 800 miles, his body weight got so low that he required an airlift rescue. A frostbitten fingertip fell off, and he later succumbed to a bacterial infection related to his ordeal.

In 2017, Englishman Ben Saunders, 40, ended his solo attempt 52 days in when he ran out of food. The same year, Mike Horn made it all the way across the frigid continent in 57 days, but he kite skied it.

The only person who does seem to have successfully completed a solo journey, albeit with two resupplies, on muscle power — and a harder route at that — is Felicity Aston. Her 2011 Book of Guinness World Records 1,084-mile solo journey left from the Ross Ice Shelf and ended at the Ronne Ice Shelf on the opposite coast.

Larsen calls Antarctica a humbling place where little problems can become expedition-ending disasters over time. “Any solo adventure in Antarctica is a dangerous one.”

But apparently, O’Brady and Rudd have been inspired rather than scared off by previous attempts to cross Antarctica.

In extreme terrain like Antarctica, it’s all relative. There’s no questioning that these are serious attempts for solo, unsupported glory at the end of Earth. Guess we’ll just have to follow along to see how it unfolds.

Up Next: Pro Recovery Tips for the Amateur Athlete