How does Columbia’s hot-weather clothing stack up against summer in the Utah desert? Two adventurers hit a scorching trail to find out. 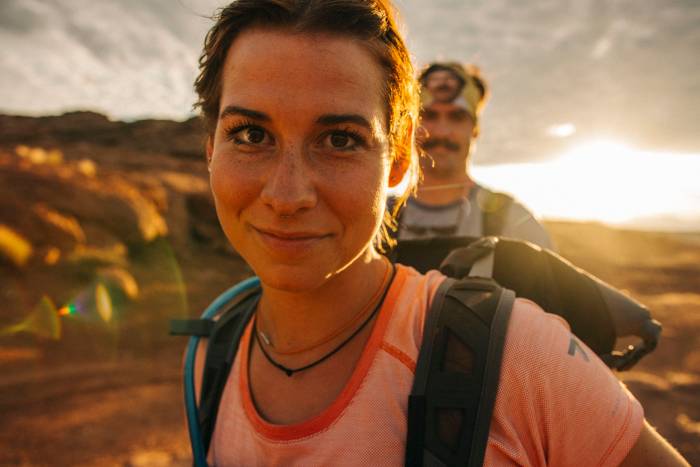 Friends, athletes, and outdoor enthusiasts Lauren Steele and Paddy O’Connell like to play outside. They like to laugh, too. So they gladly signed up for an insane trekking journey on the iconic White Rim in Canyonlands National Park outside Moab, Utah.

Columbia wanted the duo to test the muscle of its proprietary Omni Shade Sun Deflector technology. Sweat-wicking reflective dots are embedded in a variety of short- and long-sleeve shirts, as well as a hat and gaiter.

Here’s what they had to say about the fun (and sometimes stupidity) of the trip — and the gear that kept them alive, or at least cool, in the desert heat.

How did you become adventure buds in the first place? 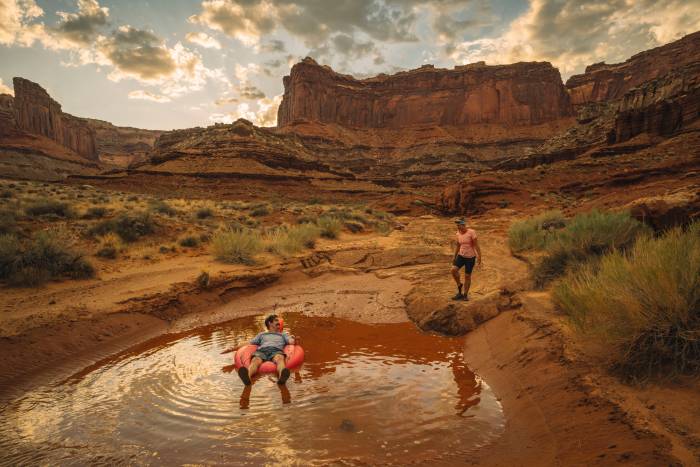 This quirky duo also likes to joke around. They alternately said they met each other in the weirdest ways. Lauren said Paddy, who she called a “droopy-mustached buffoon,” was “hitchhiking the backroads of the Midwest, with his thumb stuck westward and a bindle slung over his shoulder.”

Paddy had a similarly silly story about Lauren.

“She was in charge of one of those rotating hotdog cookers just outside one of those huge cattle farms. I felt kinda bad for her since she smelled like a sun-cooked port-a-potty, but she made a mean truck-stop hotdog. We became fast friends.”

Both lies. But that’s kind of how things go with this hilarious outdoor adventuring duo that likes to do things like hike across the desert for five days in July to test out how Columbia’s hot-weather clothes measure up.

They actually met on a ski trip in Utah’s Wasatch Mountains.

“From the jump, we hit it off. It’s just one of those friendships in which each person recognizes similarities and a kinship,” O’Connell said.

What did you learn about yourselves (and each other) during the trip? 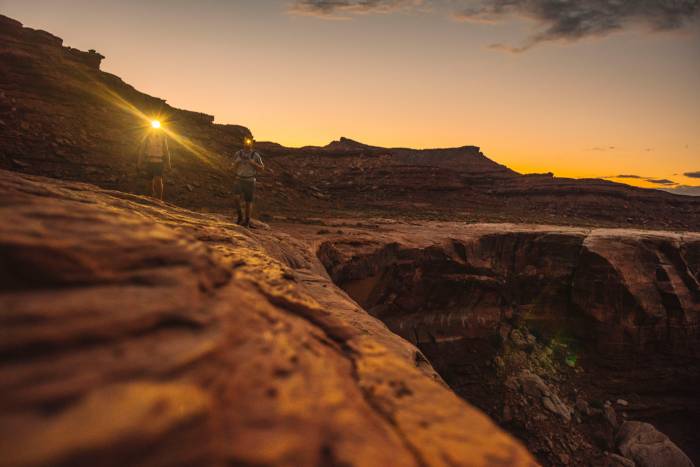 Lauren Steele: I learned that there is no such thing as being overhydrated. I learned that I am a conductor for lightning and I should not be trusted near storm clouds. I learned that Paddy is really heavy since I had to carry him half of the hike.

I also learned that it’s incredible to go places when people say you shouldn’t. Sure, Canyonlands National Park is incredibly hot in the middle of July. But also, it’s empty. Seeing Monument Valley at sunset with my friends — no tourist vehicles, no crowds — is something I’ll never forget.

Paddy O’Connell: I learned that I am more artistically and athletically talented than Lauren. Whilst carrying her on my person like a parent carries their child in one of those little chest hammocks, I recited Frost poems and most of Shakespeare’s early work while Lauren drifted off to sleep.

I learned that if you don’t force Lauren to eat during big, grueling activities she just won’t eat. And that’s when she gets — ahem — a little ornery. Sometimes I’d fling granola bars at her like ninja stars.

I think this trip reaffirmed my belief that life is a team sport. Lauren and I really leaned on one another during the hike, literally and figuratively. And nothing is that difficult if you have a smile on your face and raucous laughter exploding from your body.

What gear did you rely on most or stood out for “toughness” during the trip? 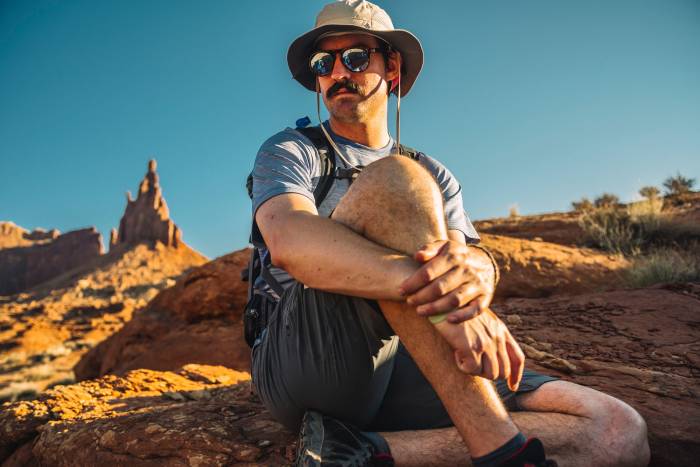 Lauren: Hands down was the Columbia sun hat. Seriously, a good sun hat is the least praised and most crucial apparel item in the desert.

Paddy: I think dunking the sun hat and the neck gaiter in cold water, and wearing them in combination really helped bring the temp down … if not trick me into thinking there was a breeze. You’re probably not going to win any fashion awards, but they were lifesavers.

What item did you underestimate the most? 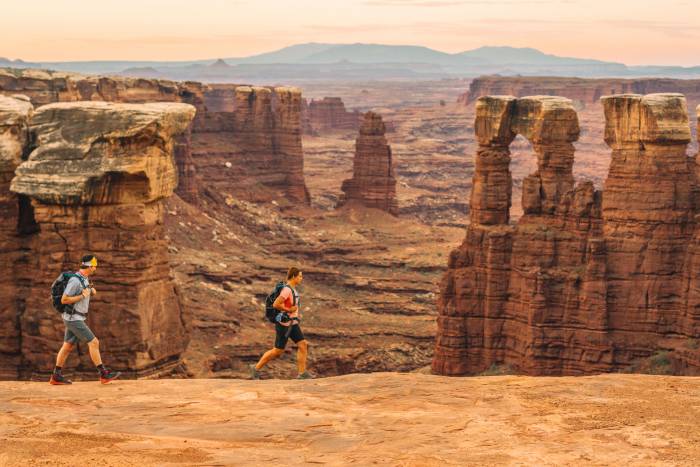 Lauren: The Columbia Freezer Zero Arm Sleeves. I put them on thinking that they would make me look like an NBA All-Star but they pulled double duty and also kept my arms sunburn-free.

Paddy: I agree with Lauren. The sleeves were awesome to fend off charred skin, bugs, and random desert abrasion. We kinda looked like Allen Iverson. But when you dunk them in cold water and slide them up your arms as the temps reach 115, it’s like jumping in a pool.

What was your personal rock-bottom moment during the trek? 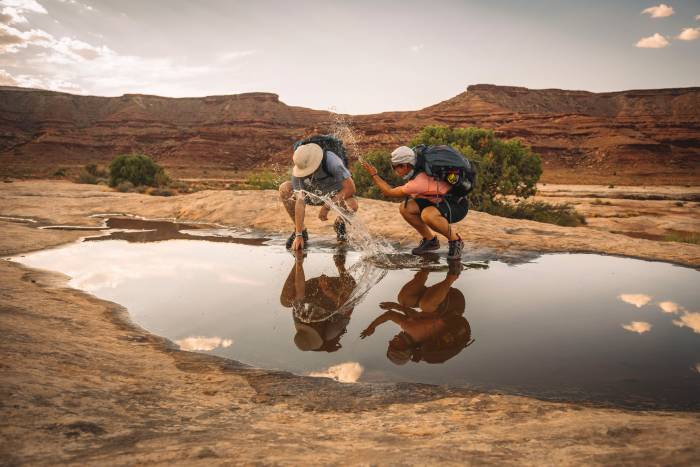 Lauren: On day three, my feet felt the effects of the rack/gravel on the White Rim Trail. Luckily, Paddy was right next to me cracking jokes, so it could not be confirmed nor denied that my laughter might actually have been sobbing.

I’m used to getting as much ground beneath me as quickly as possible when I set out to complete a mileage-based objective. But when it’s 115 degrees out and the sun is dead set on burning you with its death rays of fury, it’s more about being smart than being fast. But being smart meant moving slower, taking more days to complete the trip.

Paddy: The bugs, heat, and complete and utter lack of sleep really got to me on day three. We were at the midway point, the bugs had opened up an all-you-can-eat buffet on my skin, and I couldn’t get more than an hour of sleep at night because the ground felt like a stovetop. But any time I was hurting, Lauren would swoop in and we’d start laughing it all off.

If you come back to this trail, how would you take it on next time? 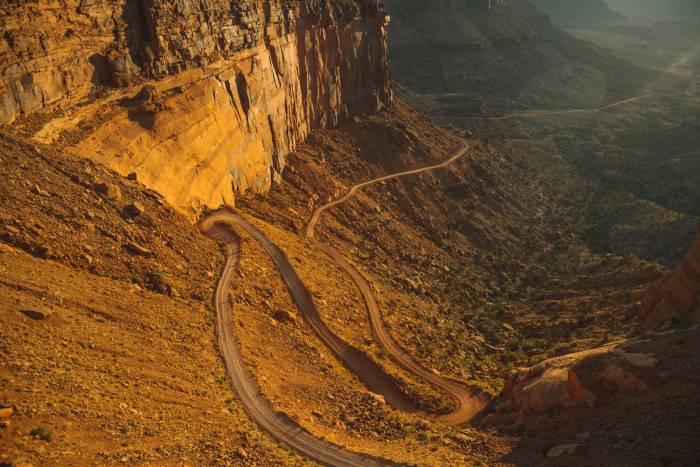 Lauren: Run the entire thing with a temperature-controlled bodysuit on.

Lauren and Paddy's Ideal Gear for the White Rim Trail

This article is sponsored by Columbia Sportswear. Check out its Omni-Shade Sun Deflector gear here.

Up Next: Trekking the White Rim Trail in July: The Best Bad Idea