Reebok, a brand known for shoes, spent two years refining the new PureMove Bra. It’s available to the public in three days. But will it live up to its billing as the solution to our sports bra woes?

Reebok is banking on its proprietary Motion Sense technology to steal the show. Reebok touts the PureMove sports bra to adapt to the velocity and force of the body (and, in this case, breasts) in motion.

As we’ve reported before, lots of brands have tried to tame this dynamic female body part, mostly through fabrics, straps, and underwire support. Reebok went a different route with what it calls Motion Sense technology. The bra purportedly “senses” when motion begins and creates a “custom” shape to support each wearer’s chest.

Shefit is trying to overhaul how women fit and function in a sports bra for the next generation. The brand has patented a technology that it claims is the “world’s only custom adjustable” sports bra. Read more…

That means it works the opposite way as many heavily constructed sports bras on the market today. Danielle Witek, Reebok’s senior innovation apparel designer, explained the technology’s intention in a press release.

“The minimalist design of the bra may seem deceiving when you first hold it, but you should not confuse this for lack of support or technology,” she said. “Every single detail is intentional and directly informed by years of our testing and research.” 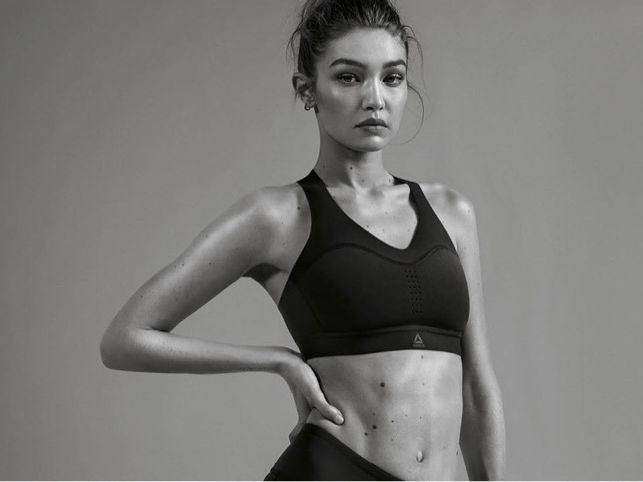 Reebok worked with a University of Delaware product development team to understand breast biomechanics. It used 54 motion sensors to monitor how the PureMove Bra shifted on the female body.

WTF Is STF? Non-Newtonian Fluid in a Bra

To achieve the lightweight yet motion-controlling package it desired, Reebok applied shear thickening fluid (STF) to the PureMove Bra fabric. It sounds bizarre, but this futuristic gel — already used in bulletproof vests and NASA spacesuits — coats the material and firms the fabric as you move.

STF is a pretty wild substance with weird properties. Part of a group of non-Newtonian fluids, STF reacts to force with increased viscosity. This means it tends to react like a solid when subjected to quick exterior forces.

Check out the video below to nerd out on fluid mechanics and get a better understanding of this technology.

Using this principle, Reebok claims the bra can mold to individual breast shapes while in fluid form. But when the fluid is put under strain by motion, it will stiffen to add support. This real-time adjustment aims to keep breasts stable yet comfortable.

Because the technology does the heavy lifting, the PureMove Bra has a simple seven-piece construction (that’s not a lot compared to many sports bras). It also uses what Reebok calls “second-skin fit” for movement freedom, as well as front and back perforations for breathability.

Maybe a motion-sensing sports fabric is a stretch. We haven’t tested it yet, but if you’re among the 1 in 5 women who avoid exercising because they can’t find the right sports bra, you might want to give this technology a go.

The PureMove Bra will be available in sizes XS to XL for $60 on Reebok’s website starting August 17. Key retailers will carry the new sports bra by month’s end.

Up Next: Why Floyd Landis Is Peddling a Healthier Kind of Dope