The Badlands Vario Pack System is built on the premise that one pack system can meet all your hunting needs. GearJunkie’s Jace Bauserman puts that idea to the test.

A good pack is worth its weight in gold. If you’ve trekked off a mountain with shoulder straps cutting into your trapezius muscles — not being able to transfer the weight to your hips — you know what I mean. Ouch!

I cut my hunting teeth in the Western backcountry, and to date, I’ve tested more packs than mosh pits at a Metallica concert. Recently, I put a new model, one with a lot of hype surrounding it, on my back for a trio of hunts.

I figured adventures for moose, pronghorn, and elk would tell me a lot about the pack and provide valuable information I could pass on. So, for all you pack gear nuts out there, here you go. 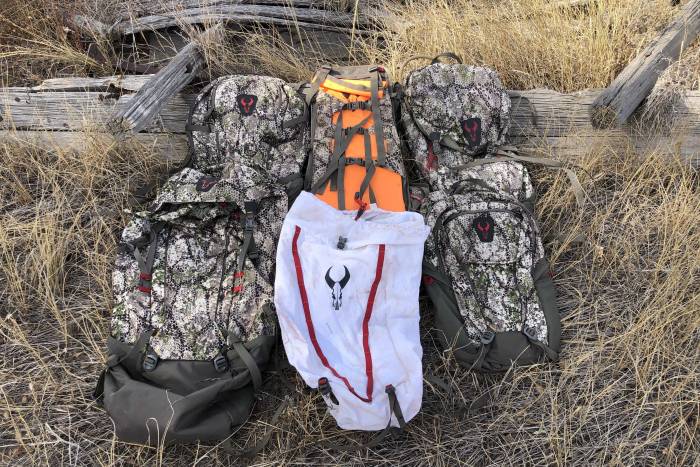 The Badlands Vario Pack System is made up of seven items and was designed for maximum hunt customization. The good news: You don’t have to buy all seven items for the system to benefit you. You can pick and choose what you need depending on your hunt style.

The backbone of the system is the Vario Frame ($350). Fitted with ultralight yet ultradurable magnesium-alloy stays, this pack was engineered to haul heavy loads. The frame comes in torso sizes of “large” and “medium” and tips the scale at 5 pounds 4 ounces.

The memory-molded foam suspension system is fully vented to keep your core cool. The shoulder straps and waist belt also feature an increased amount of memory foam to ensure a comfortable ride.

Until I stepped out of the truck at 11,500 feet on October 1, 2019, I’d never shouldered the Vario. Dumb? Yes, I agree, but the system only arrived the previous day. The night before the moose opener, I assembled the pack and frame in my camper and loaded it up for the next day’s hunt.

The hunt was for my father-in-law’s moose, and we would be covering long distances on foot. So, I opted to attach the 65 OS pack to the frame. All packs (minus the Day OS) come with medium and large sleeves that simply slide over the top of the Vario Frame. Slits in each sleeve allow the frame’s Load Lifter Buckles to slide through. Reattaching the shoulder straps attaches the top portion of the pack to the frame.

To attach the bottom portion, remove the bedroll straps, feed them through the bottom buckles on the frame, and then run them back through your bedroll straps. Now it’s just a matter of matching up buckles. The system is a breeze to use and takes only seconds to swap between packs. 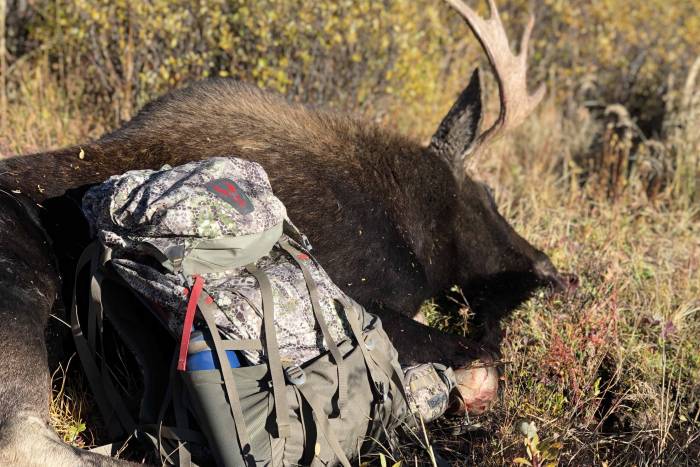 The pack and frame with 31 pounds of gear rode great. Even the thick, sometimes impenetrable willows didn’t damage the lightweight, durable KXO-50 fabric. I also appreciated the customizable waist belt on the frame — Velcro tabs (medium and large) allow for a custom fit.

Also, the waist belt features a pair of zippered pouches, and behind each pouch is a hip-belt pistol holder. This is a great addition. The holster held by FN 509 midsize 9mm and prevented it from digging into my hip and creating an uncomfortable ride. The waist belt also features reverse tightening. Set it to your waist and forget about it.

A double drawstring closure system keeps gear dry and safe, and a quick tug on the red nylon tabs allows top-loading access. Side-access zippers also make storing and retrieving gear a breeze. I was also a fan of the double bucket lid closure. The lid provides further storage and promises ease of access.

My eyes were opened to the true value of the Vario System when my father-in-law dropped the hammer on a Shiras bull. We’d ventured far in the backcountry, and my father-in-law, being in his late 60s, couldn’t haul much meat. In total, I made four to-the-truck-and-back-again trips, each with a hefty pack full of moose meat.

A Pack Full of Moose Meat 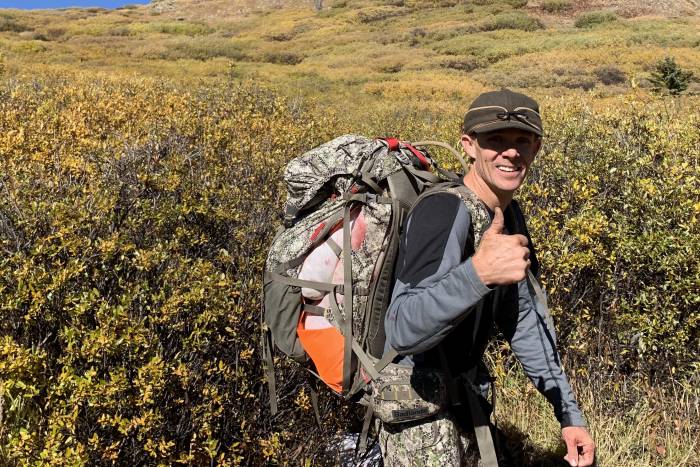 Stored in game bags, the meat fit and stacked easily into the side-paneled blaze-orange meat shelf on the pack’s frame. A trio of attachment straps along with a T-hook attachment system held the meat tightly.

One quick hat-tipper I must mention is the lengthy straps on the frame and all the packs. I hate fighting straps trying to gain another half-inch. I never had to fight a single strap with the Vario System.

With the frame fully loaded and the pack reattached, I easily adjusted the shoulder straps and waist belt so the bulk of the load rode on my hips. Further adjustment, should you need it, can be found in the frame’s adjustable yoke.

Even loaded with more than 100 pounds of meat and gear, the pack wasn’t shifty or awkward. 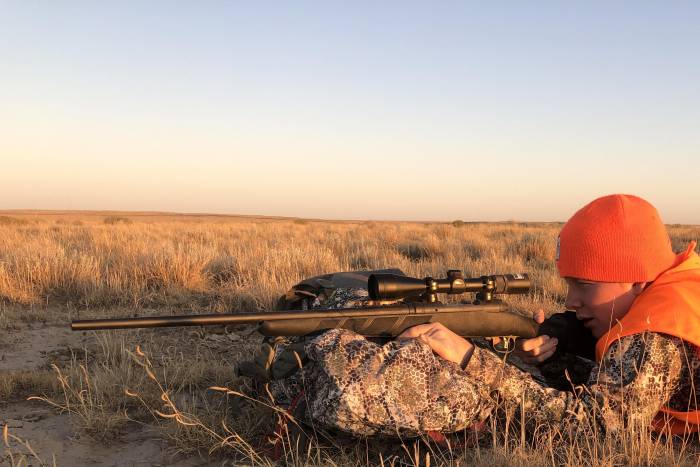 The following week, I packed my son’s entire Boone & Crockett pronghorn 2 miles in a single trip off the plains. The meat was boned out, and the cape and horns attached to the system easily via the multiple straps. Aramid bartacking on all stress points allows you to really pull on the straps and get loads situated tightly without fear of ripping or breaking points of attachment.

For this hunt, I also used the Vario Backcountry Game Bag. The lightweight, breathable nylon construction allows for air circulation, and the bag held an entire boned-out pronghorn. Best of all, after the hunt, I simply washed the game bag, and it was ready to use again. For this hunt, I opted for the 5,000-cubic-inch Vario 50 OS. It proved field-worthy.

Most recently, I once again used the Vario Pack Frame in concert with the Vario 65 OS to help pack a buddy’s 5×5 bull elk out of a gnarly canyon. The pack performed to perfection.

If you’re on the hunt for a quality pack system that will meet all of your hunting needs, the Vario System is definitely worth a look.

Up Next: The Best Dogs for Waterfowl Hunting, Quantified