Sure, you can get an adventure truck or SUV for way less than $20,000. But if you have a bit more money, you can step up to the next level of adventuremobile awesome.

The following list comprises used vehicles that can seat at least four, have room to sleep, and a drivetrain that can power all four wheels. This combination allows you to have your friends along for the adventure and carry lots of gear.

It also allows a place to lay your head, travel through varied weather conditions, and tackle most terrain you’re likely to encounter.

This list isn’t all-encompassing — far from it. But it’s a solid place to start the hunt for your next great adventuremobile. Also, note that some of the vehicles here have add-ons like campers that add tremendously to the cost. We’re basing the price on the vehicle alone.

Reasonably priced used vehicles will get you to adventure and back. If you're shopping for a used car or truck, these 13 under $10,000 are a good place to start. Read more…

The XC70 T6 AWD, aka Cross Country, offers a refined on-road ride, impressive ground clearance, and lots of cargo capacity. Plus, it has Volvo’s renowned safety features and a quality luxury interior. Think of it as a super-safe luxury Outback.

The good: The T6 300-horsepower inline-six turbocharged engine offers plenty of power for your adventures and about 21 mpg. You even get quality off-road driving features like Hill Descent Control with the Cross Country. The quiet and refined luxury interior is an easy place to spend a lot of time.

The bad: Reliability isn’t bad, but when things do go wrong, parts and labor aren’t cheap.

Why XC70? The Cross Country is an adventure vehicle that’s fun and easy to drive every day. But it still offers enough capability to get you to most adventure destinations in any weather.

The Land Cruiser is arguably the most sought-after off-road vehicle in the world. It offers amazing capability, reliability, and durability. Because of that, it also has great resale value, meaning you have to go back a full 10 years to get a quality example under $20,000.

Reasonably priced used vehicles will get you to adventure and back. If you're shopping for a used car or truck, these 13 under $10,000 are a good place to start. Read more…

The good: Go anywhere your heart desires with full-time 4WD and a standard center-locking differential.

The bad: The 4.7L V8 under the hood offers plenty of torque, but it’s thirsty and not that powerful. The third-row seats need to be removed to get the most out of the cargo area.

Why LC100? If you want a capable and dependable vehicle that will hold its value, look no further than the Land Cruiser. 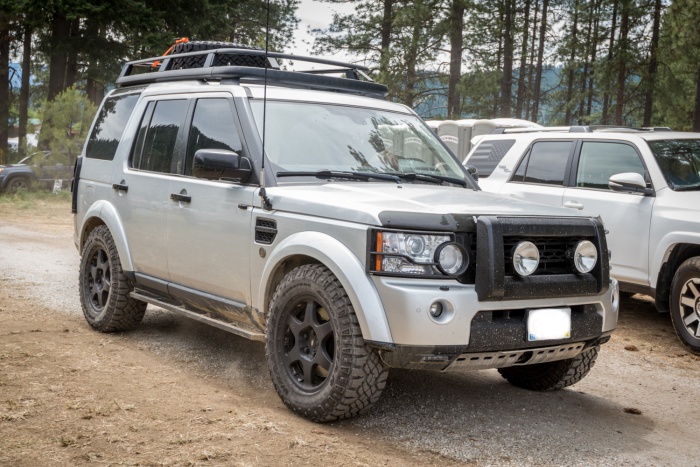 Someone else swallowed the huge depreciation on the LR4 already. These vehicles started at $50,000 new, so now’s the time to snag a bargain on this capable luxury SUV. The V8 HSE model is what you want, as it provides more power and nearly the same mileage per gallon as the V6 with more luxury features than the SE.

Price: Lots of fully specced, quality examples are available with around 100,000 miles for just under $20,000.

The good: The interior is cavernous, and the seats fold completely flat, making great sleeping or storage space. The terrain-response system makes this vehicle extremely capable off road, even if you have little driving experience beyond the pavement.

The bad: It has spotty reliability and is expensive to repair. Oh, and you also have to feed this beast premium gasoline and can expect to only get around 14 mpg — if you’re lucky.

Why LR4? Come on, you get to drive a Land Rover! You also get a comfortable, refined ride anywhere you might want to venture and an interior that can carry all your friends and gear. 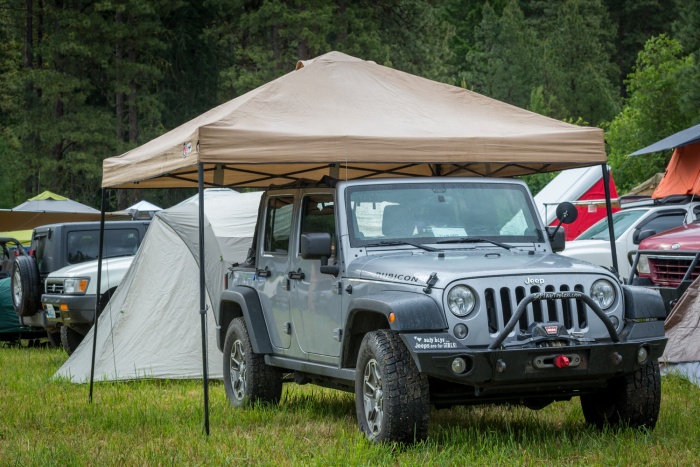 No list of adventure vehicles would be complete without the Wrangler. There are very few vehicles as capable from the factory as the Jeep, and the massive aftermarket for these vehicles makes them even more capable and customizable.

Price: Four-door Wranglers aren’t particularly thrifty. You’ll have to go back to about 2010 in order to get a good example with all the bells and whistles, including the Rubicon package, for under $20,000.

The good: The off-road capabilities of the Wrangler are second to none. With the Rubicon edition, there’s little that can stand in the way of this little machine.

The bad: Don’t expect good fuel economy in this boxy, solid-axle vehicle. The interior volume is also a lot smaller than you might imagine, as the roll cage intrudes on much of the space.

Why Wrangler? Buy this if you need to tackle off-road obstacles on the way to your next adventure. What other vehicle allows you to pop off the doors and roof to have open-air driving, especially off road?! 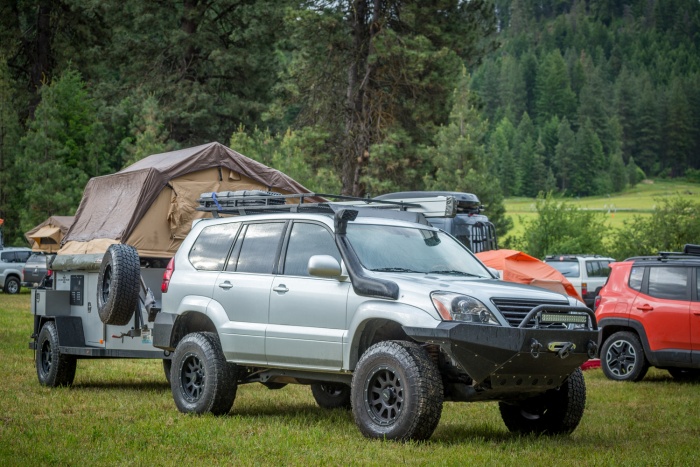 The GX has the same underpinnings as the formidable Land Cruiser Prado, a popular SUV around the world that has a proven track record of reliability and off-road prowess. This vehicle offers Land Cruiser quality, 4Runner suspension, and Lexus luxury.

The good: The interior of the GX is truly a nice place to spend time. The platform is proven off road and offers good interior space and payload capacity.

The bad: It’s not exactly pretty to look at — or rugged-looking at all, for that matter. For some parts, you have to pay Lexus prices. Premium gas is required, and don’t expect good fuel economy from this heavy, full-time 4WD, V8-powered luxury SUV.

Why GX470? It has proven Toyota reliability, durability, and off-road capability with Lexus style and comfort. 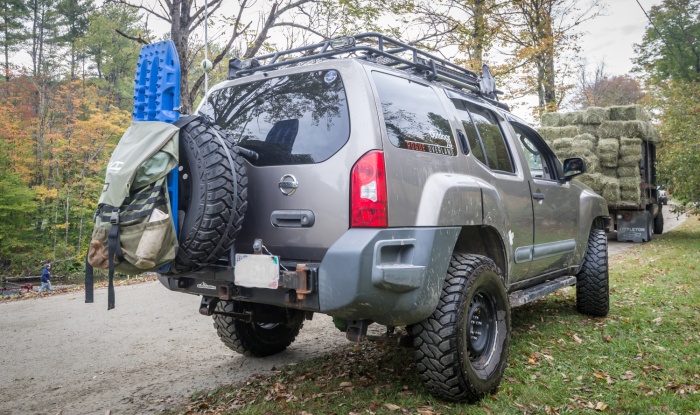 One of the last body-on-frame SUVs, the Xterra is built for durability and off-road fun. While not a big SUV, the Xterra still has just enough room to sleep and carry your outdoor gear.

The good: A powerful V6 propels this rugged body-on-frame SUV with gusto. And it’s even more fun to drive with the optional six-speed manual transmission. Durability and readily available inexpensive parts keep ownership costs down.

The bad: The interior feels a bit cheap, the ride feels like a truck, and you’d probably expect better fuel economy out of a V6, as the 4WD Xterra gets only around 18 mpg.

Why Xterra? A true rugged outdoor adventuremobile, the Xterra offers everything you need in a fun, compact package. 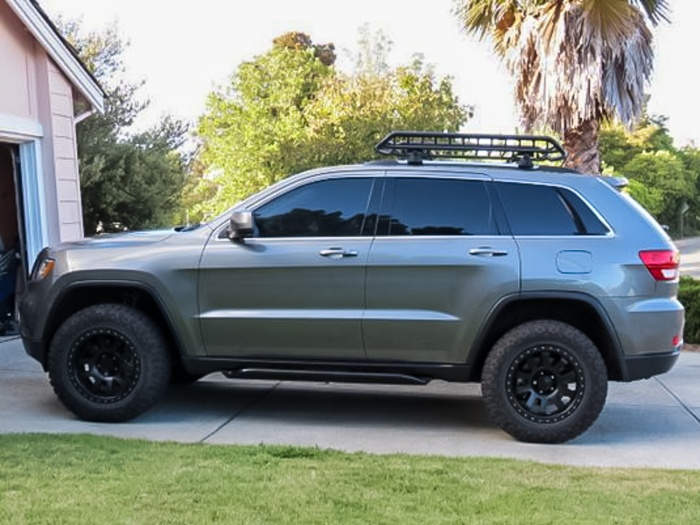 The Grand Cherokee gives you Jeep off-road heritage in a comfortable, modern SUV package. It’s great for towing all your toys as well, especially with the Hemi V8, able to tow up to 7,400 pounds. While you can get this vehicle with a diesel, it is an underpowered diesel that has few advantages over its gas V6 or V8 counterparts.

The good: It’s capable off road, is comfortable around town, and has plenty of power, especially with the Hemi V8. It’s also a top safety-rated SUV once you address the recalls.

The bad: The Grand Cherokee has been known to roll away (even when you think you put it in park), leak fuel, or catch fire in a rear collision. These issues have been addressed with recalls, so make sure the example you purchase has been sorted.

Why Grand Cherokee? It’s a modern Jeep SUV that behaves equally well on and off road. 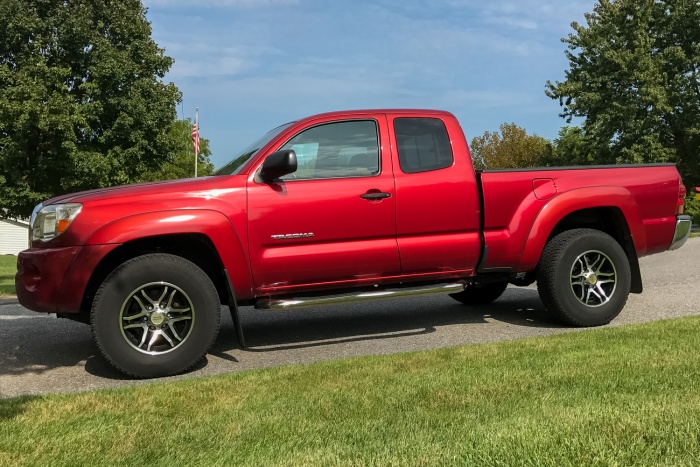 If a “small” indestructible pickup is the right fit for your adventures, there isn’t a better option on the U.S. market than the Taco. Show up in any adventure town in America, and I’m sure you would find a Tacoma on any street you look.

Price: Prices vary widely by location, but you should be able to find a good-condition 2012 4×4 Access Cab with TRD Offroad package for under $20,000.

The good: The build quality and durability have been proven over time to be fantastic. Stock, this truck is capable off road, but with some minor improvements, like upgraded suspension, its off-road capabilities are legendary.

The bad: You’re going to pay what’s known as the “Toyota tax” when you buy any 4×4 Toyota, but especially the ever-popular Tacoma. Both the I4 and V6 engines are underpowered, but you’re probably going to want the V6 to power you to adventure, even at the loss of a few miles per gallon. Keep an eye out for frame rust, as Toyota recalled ’05-’10 to replace frames with issues.

Why Tacoma? Besides the venerable Outback, you’d be hard-pressed to pull into any adventure destination parking lot and find a more prevalent vehicle. The reason is that this pickup keeps going when other vehicles die, and it can tackle most driving conditions the average outdoor enthusiast is going to encounter.

Bonus: If you can get your hands on a TRD edition Tacoma, you get a selectable locking rear differential, which takes this vehicle’s off-road prowess to the next level. 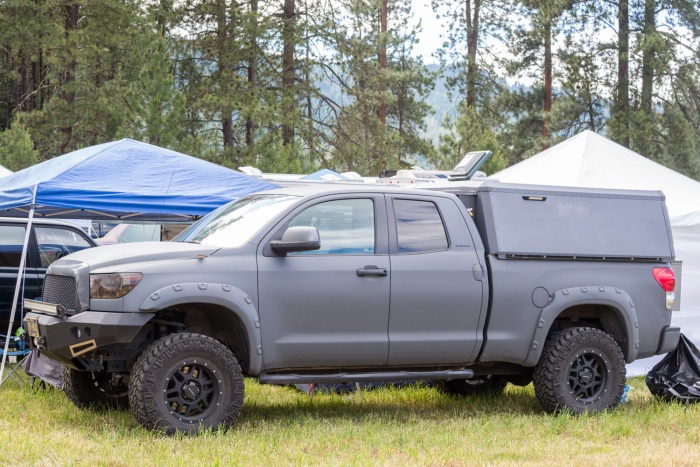 The Double Cab 6.5-foot box with 381 horsepower i-Force V8 is probably the best setup for this truck. It offers plenty of seating, lots of bed space to sleep and carry gear, and enough power to move this big truck with authority.

The bad: Not a small truck by any measure, expect this vehicle to have a tough time fitting down some narrow tracks and in tight parking spaces. You can expect around 15 mpg no matter which powerplant you opt for. The rear suspension is designed to carry or tow a load, so the ride is a bit harsh when the truck is unloaded.

Why Tundra? This half-ton pickup with three-quarter-ton pickup towing and power is all American made and ready for adventure. 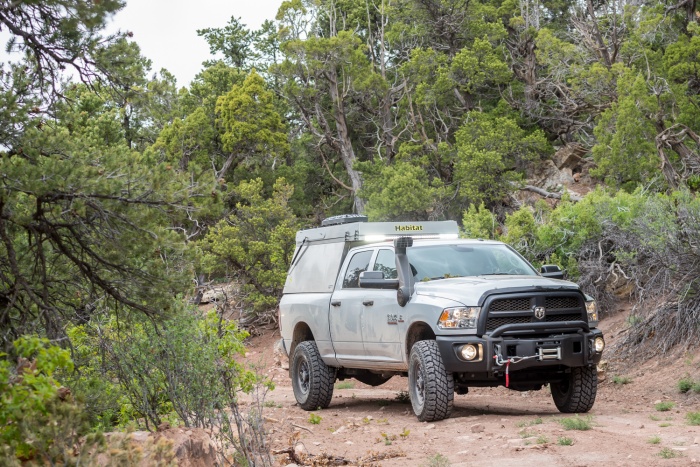 There isn’t much that can stand in the way of a full-size, 5.9L Cummins turbo-diesel three-quarter-ton American pickup. These trucks are made to hold up and perform in the toughest conditions while also offering respectable fuel economy, around 15 mpg, and even a manual transmission option.

The good: RAM has power, durability, and reliability for many miles of adventures. The Cummins also offers impressive fuel economy, loads of usable power, and insane towing capacity.

The bad: Big truck parts, especially diesel parts, aren’t cheap. While you should generally have fewer issues, it will be expensive when they arise. The automatic transmission on these trucks is their weakest component, so find a manual example if you can.

Why RAM 2500? This Cummins diesel-powered full-size truck is sure to haul you, your friends, and all your outdoor gear wherever your adventure dreams take you.

Bonus: It’s relatively easy and inexpensive to add a vegetable-oil fuel system to these trucks, which allows you to save a ton on fuel costs and help the environment at the same time. 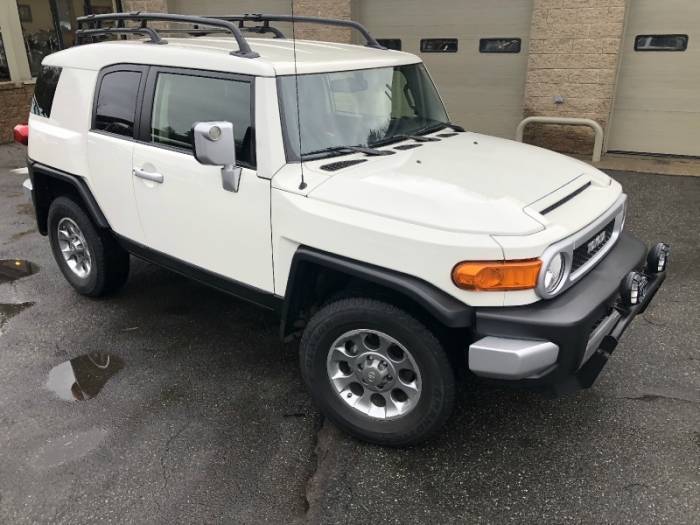 The FJ Cruiser was only around for 7 years in the U.S. and much loved by enthusiasts. Because of its quirky looks and ergonomics, as well as its off-road capability, values won’t be dipping much lower on these Toyota fun machines.

The good: It’s a solid performer on and off road. The FJ Cruiser is a unique vehicle with tons of charm as well as Toyota reliability.

The bad: The FJ Cruiser is a thirsty little truck. It also has cramped back seats and little cargo room. There’s more plastic inside and out on this vehicle than you’re likely to find on any other.

Why FJ Cruiser? It’s fun, unique, and quirky, with real off-road capability and Toyota reliability. The enthusiast community around the FJ Cruiser is second to none as well.

PS: We’re just as sad as you that there aren’t any vans on this list. Sadly, there just aren’t many vans with a 4WD system — most are 4×4 conversions — and they bring big money. Yes, you can find one under $20,000, but it s likely to be a very high-mileage, older unit with rust issues.

Up Next: Idle RVs Provide Temporary Housing for First Responders