Compatible with most cable shifting systems, the Archer D1x digital shifter is effective and smooth. But it does come with some caveats. We put it to the test.

Not only is there a button for my new derailleur, but there’s also an app for that. The Archer D1x is a digital shifting system that can fit almost any bike. It’s super versatile and quick — but you do have to remember to power it up before you ride (blue tape FTW). 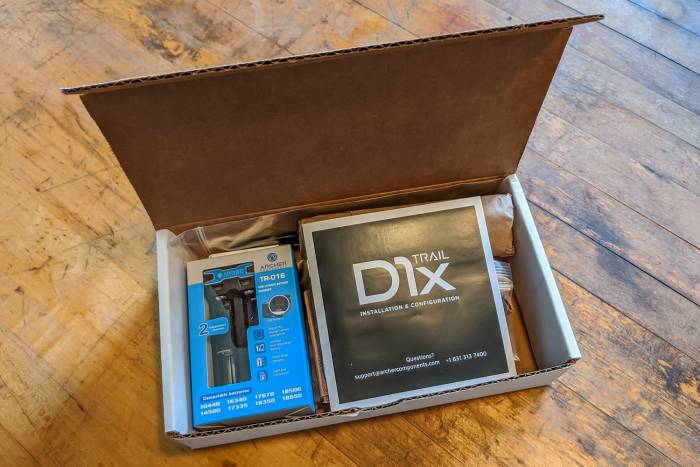 Full disclosure, Archer sent me a D1x to review at no cost, and being a nerdy type, I really dig a tech solution to a problem that may or may not exist (we’ll get to who would want this later). First, let me introduce you to the box of parts that can arrive at your doorstep if you fork over $389. 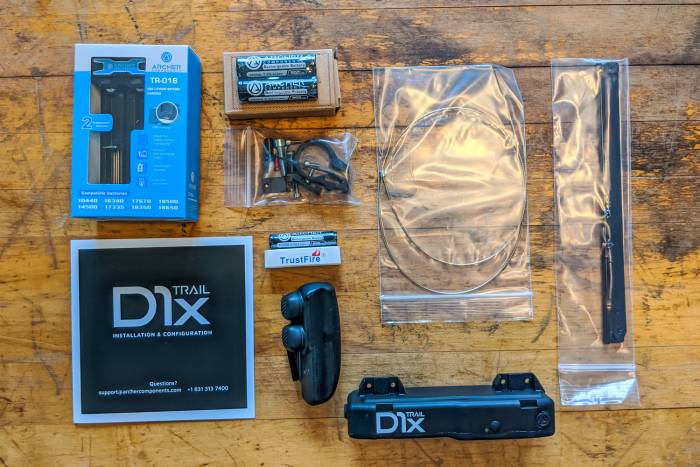 There are two modules to install on your bike. The business end of the D1x contains a servo motor that drives the rear derailleur cable (Archer does not make a front derailleur product yet). Next, a switch pod bolts onto your handlebars in place of your existing shifter. 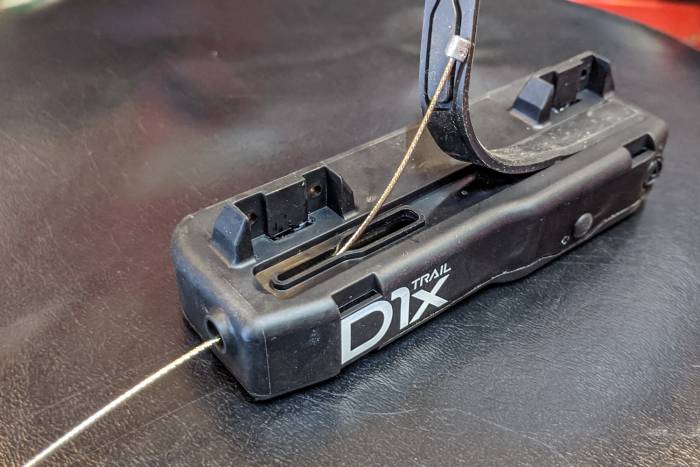 Both modules are powered by lithium batteries, which you’ll need to charge about once per season (depending on usage). The D1x is smart enough to enter a low-power (slower shift) mode if your battery gets low. If you ever run out of juice completely, the D1x will shift to a gear of your choosing so you can pedal home with a single speed. 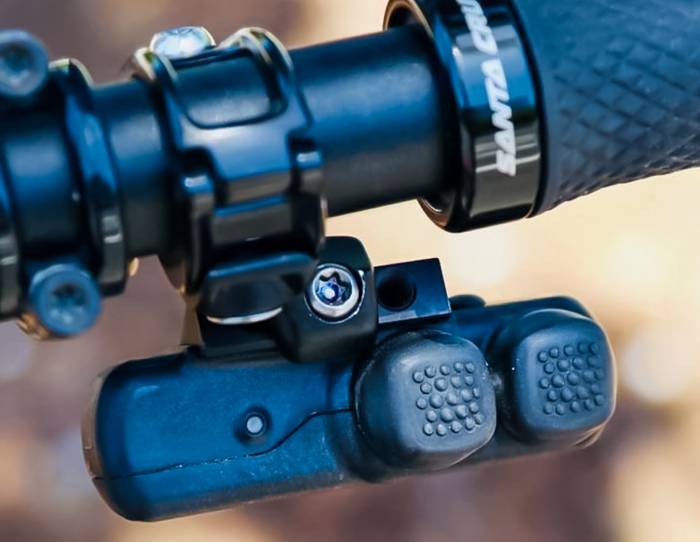 The transplant candidate for our test is my trusty 2014 Giant Trance which, sadly, was a tricky fit. The existing braze-ons pushed the D1x out, and there was no flat surface to secure it to.

In the end, a crafty use of foam and zip-ties got the job done, but it’s not very clean. Archer’s support through all this was solid, and there are options in the pipeline that will alleviate these issues for future users. 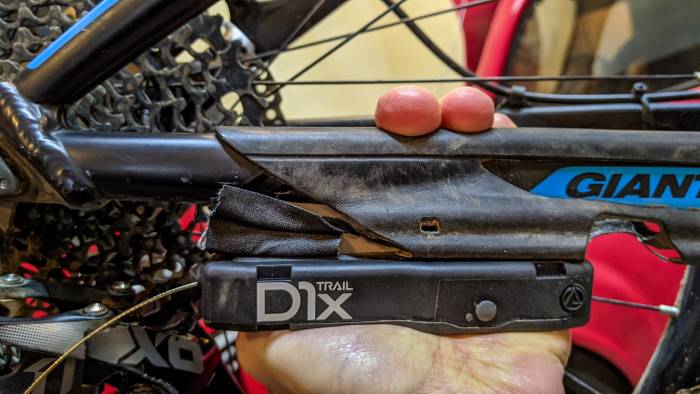 Besides my frame-specific challenges, the D1x is easier to tune than any other shifting system I’ve encountered. The magic in the D1x is how flexible it is. If you have a bent derailleur or you’re working with mismatched hardware, it doesn’t matter, the D1 accommodates any cable pull ratio from any manufacturer.

Once you fire up the app, you can micro-adjust the movement for each sprocket independently. I’ve lobbed far too many curse words while adjusting derailleurs in the past; Archer’s app makes perfect adjustment child’s play.

Trying to Break the Archer D1x

If you have no idea what “cable-pull ratio” means, let’s cut to the chase and talk performance. Is the D1x good? Yes, it’s buttery smooth. And it took every terrain we threw at it — including clods of sopping Oregon muck.

On the return from a surf session, I found a perfect first ride: early-season trails in the Tillamook State Forest. The mud was so thick I’m still cleaning it out of my teeth, but the D1x didn’t skip a beat and even survived a post-ride pressure spray at our local carwash (not endorsed by Archer!). 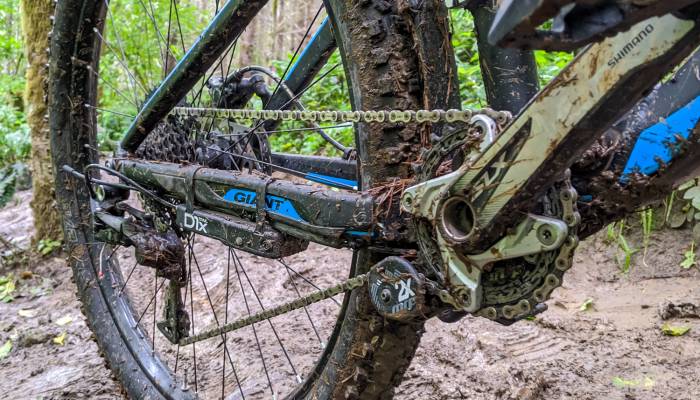 The next week, I went east of the Cascades to the drier-but-still-tactile Post Canyon trails of Hood River. Rolling through Spaghetti Factory Trail, I completely forgot I was pushing buttons instead of levers — which is probably the highest praise I can give — it just works.

Three months later, and it’s still slick-shifting on dusty Idaho singletrack. It even survived 1,500 miles of overland touring on a hitch carrier behind my Land Rover. The carrier and Rover are in much worse shape after the trip.

Is Digital Shifting for You?

Now for the real question: Is the D1x better than the archaic cable-pull SRAM X0 shifter it replaced? Well, no … at least not for me. As good as it is, the D1x comes with compromises.

The full kit weighs just over 250 g installed and replaces about 150 g of SRAM shifter and cable. My Giant now rides 100 g heavier, requires a power-up sequence, and has two more devices that require occasional charging. 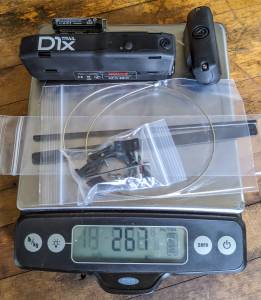 Another thing that weighs heavy in my mind is obsolescence — the D1x is useless without its companion app. You could be stuck in the mud if Archer were to close its doors or stop supporting old hardware, and we’ve already seen this with major electronics brands like Sonos and Google/Nest. Archer does claim to keep an “open” system and to give tinkering folks the keys to work with the D1x directly.

So is the D1x for you? If you want to shift with your left hand, then quite possibly yes. The D1x button pod can be installed virtually anywhere on your handlebars. If you love to hyper-analyze your ride, the associated app can tell you about every shift point. It’s very well-developed.

Button Pounding May Be the New Norm

Considering that this is the first product from a newcomer to the market, the D1x is a serious accomplishment — we need new brands like Archer to innovate and challenge legacy manufacturers.

For now, the D1x is a niche product that may only appeal to early adopters, but the same could’ve been said about dropper posts 15 years ago. Digital shifting is coming for all your cycles, and the experience is only going to improve.

Saving…
X Games With One Leg: Julian Molina Lands BMX ‘Fan Favorite’ Award
New to the Outdoors? These 4 Hobbies Are Perfect for Beginners
×