This year, Brittany Konsella became the first person to mountain bike every mile of unique singletrack trail around Crested Butte, Colorado. So, what’s the best mountain bike ride in town? We asked Konsella to find out.

“It wasn’t my idea,” said Konsella, a former teacher who has lived in Crested Butte for 14 years.

The Gunnison-Crested Butte Tourism Association sought her out for its TrailQuest challenge: to become the first to log all 750 miles of unique singletrack trails in Crested Butte and Gunnison Valley area using the CBGTrails app‘s digital map.

The Race to Ride Them All

“They didn’t know anyone who had ridden them all, and we were already notorious for these weird goals,” said Konsella of her husband and herself, who wrote a book together on crazy backcountry Colorado ski routes.

Konsella was also the second woman to ski all of the state’s 14,000 peaks.

“They knew we liked challenging route-finding and exploring with not with a lot of information,” she said. “So both of us took it on.”

But Konsella beat her husband.

It took her two seasons, mountain biking about five days per week. To make it official, Konsella had to reride lots of trail segments plus new ones — 3,600 miles in all. Her logged vertical footage was equivalent to climbing Mount Everest more than 20 times. 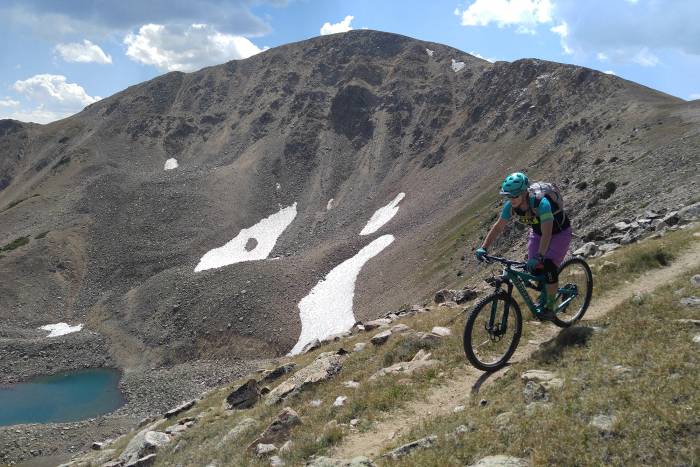 So after all that field research, what does Konsella count as her favorite ride? The Crystal Peak, Star Pass, Hunters Creek Loop.

But that name is just the first of three passes on this expert 20-mile, 5-hour mountain bike ride near Crested Butte.

The loop plus a lollipop encompasses amazing alpine vistas and wildflowers, but different ones. “They’re not the same kinds as you see on the 401,” Konsella said of one of Crested Butte’s most popular stretches for mountain biking.

You’ll want a map. Konsella’s favorite route starts at the Deadman’s Gulch, but it comes alive during an epic climb up Crystal Pass. The steep, technical former hike-a-bike section has been regraded to make it rideable, she said.

Up Next: Watch: High School Mountain Biking Is Blowing Up