Home » Biking » Fight From Your Bike: Martial Artists Show How

The Israeli special forces have long been the envy of hand-to-hand combat fighters. One Minneapolis studio modified its martial art, Krav Maga, into the first and only defense program specifically for cyclists. 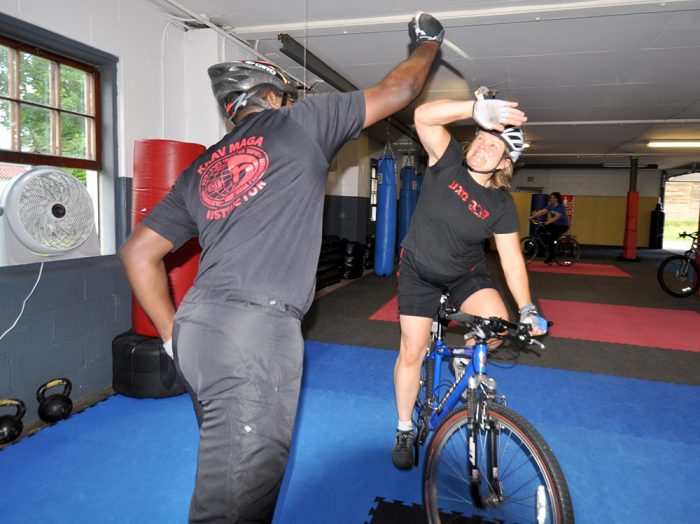 It’s a Sunday night in the city. I’m on my bike. A shout from the left; someone is coming at me.

A large man rushes me, hollering obscenities—he’s got a knife. Another attacker jumps out ahead and shoves me to the ground. Suddenly assailants are pounding me from all angles. Something snaps inside me and I throw a volley of punches and kicks that connect. I’m screaming my own vulgar threats, trying desperately to get away.

Thankfully I was spared the trauma of an actual attack. The entire scenario was in a controlled environment: Krav Maga Minneapolis, a studio near the heart of the city.

This studio is the only one in the world with a defense program catered specifically to cyclists. The Krav Maga For Cyclists workshop, a three-hour hands-on tutorial on principles and special techniques, was a response to a rash of attacks against bikers in the city throughout the early 2000s.

An avid year-round cyclist, I had to check this out. I’m 6’3″, and four push-ups and a biscuit shy of 200 lbs., so I’ve never been violently accosted while riding. But I quickly learned that a serious attack, particularly one you are not expecting, can be extremely disempowering—whether you are male, female, large, or small.

Here are some basic techniques cyclists should know to protect themselves in a potentially violent encounter.

Note: One purpose of this class is to introduce general Krav Maga defense and encourage attendees to enroll in regular self-defense classes. True self defense requires ongoing practice. 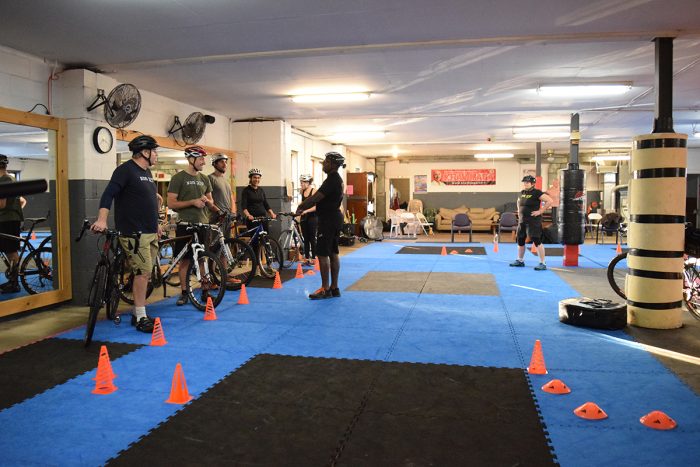 In most situations, the bike is your friend, you should not leave that friend behind unless absolutely necessary (more on that below). In addition to being a partial shield when you’re off the bike and a trusty escape vehicle, it can also be a weapon.

If your attacker(s) is (are) in front of you, you can pull the bike onto the rear wheel so that your front wheel is in the air with your hands still on the handlebars. Engage the rear brake (right hand), to keep the bike firmly planted. Thrust your arms out, using the front wheel to jab at your assailants.

With the rear wheel planted, you can swivel the bike, keeping it between you and the attackers. As soon as you have an opening, drop the front wheel, run forward and re-mount the bike.

Use Your Outdoor Voice

This applies to all situations, bike or no bike. And it is one of the simplest forms of self defense everyone should practice. Yell, scream, curse, and generally sound as crazy and violent as you can. DO NOT BE SHY—be as vulgar and threatening as possible. Attackers require a victim for their purpose. If you can (loudly) demonstrate that you are not a victim, they (like any animal) will look for an easier target.

Mount And Dismount On The Go

The first technique we learned was getting off, then back onto the bike while moving. Most of us can get off the bike as it coasts: simply stand on one pedal, swing your other leg over next to it so you positioned on one side of the bike, then hop off running while holding onto the handlebars. If possible, do this on the left side of the bike to avoid potential contact with the chain and chainring. 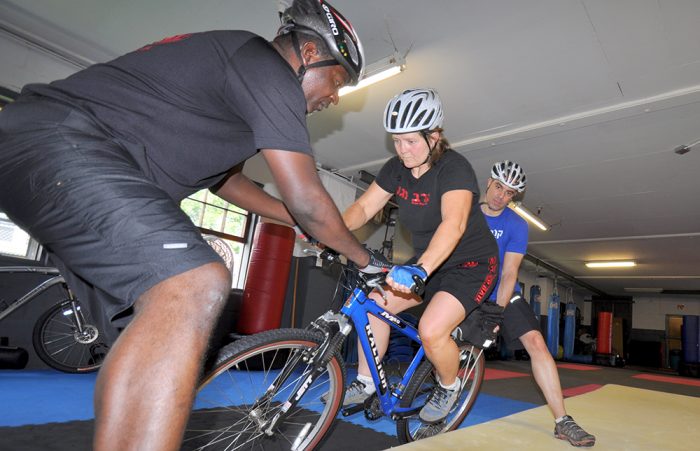 Getting onto a bike while running, however, is a bit more difficult. Not going to lie, fellas, this is uncomfortable at best. Hold onto the handlebars and run with the bike. Tilt it at a 45-degree angle, jump over the bike so one leg swings over the frame toward the pedal.

The bike will naturally right itself when your weight is over it. Keep moving your feet until they find the pedals and go. This can be tough, but it works if you practice — great for quick escapes.

If an attacker blocks your path ahead and you perceive imminent danger, execute a moving dismount as you approach—not too soon; within 10 feet. Run toward the assailant, yell for them to move, and if they remain throw a front kick to push them back and off-balance. Do not stop running, re-mount the bike on the fly and GTFO. 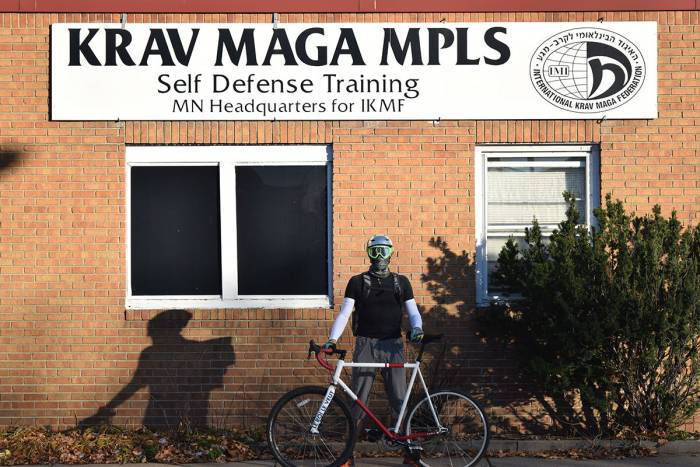 When To Ditch The Bike

In almost every scenario when you are confronted by a single attacker, keep your bike. But if there are multiple assailants from coming from different angles, let go of the bike and focus on protecting yourself. The bike may be the most valuable item on your person, so surrendering it may “buy” you a way out. Nothing is more precious than your life.

It sounds corny, but a well-maintained bike is the single best measure to avoid a confrontation. An attack is more likely to occur when you are off the bike or without it. Your best practice is to ensure the bike is tuned and in good working order.

Krav Maga’s number one principle is survival. Do whatever it takes. Ideally, you will have some practice punching and kicking. But even if you don’t, it is imperative you not accept defeat, regardless of your size or skill. Make surviving your number one priority: kick, punch, claw, bite, and do anything to afford yourself an opportunity to escape.

For more information on the next Krav Maga for Cyclists seminar Jan. 8, 2017, contact Krav Maga Minneapolis.

Up Next: Antarctic Bike: Four Wheels For Polar Cycling