Bosch has announced the CX Performance Line Race Motor, a lighter, more supportive e-bike motor that offers up to 400% assistance.

It does not replace the current Performance Line CX Motor — it’s a limited-edition drive unit that will be distributed among 20 leading eMTB manufacturers to sell with their most race-focused e-bikes. At the Tweedlove Festival in Scotland, we got a quick spin on one of those for this review: a 2023 Trek Rail, but it was enough to notice some tangible performance-related benefits.

MTB Legend Tracy Moseley explained, “It is like taming a bit of a wild horse at times, but it’s just learning its characteristics, learning how to ride it, pre-empting some of it, making sure you’re in a good body position, making sure you’re riding aggressively, and then it’s awesome. If you’re a bit, sort of, resting on your laurels, out for a cruise, it can definitely take you for a ride.”

They don’t look vastly different from one another, save for the color of the magnesium casing and the fact that it has Performance Line CX Race written across the non-drive side. Indeed, the two motors share the same bolt pattern, making it easy for manufacturers to add a top-level, race-focused e-bike model to their existing lineups.

That doesn’t mean you can upgrade your current Bosch-equipped eBike, however. While you could theoretically switch out a Performance Line CX Motor for the new CX Race Motor (the batteries and hardware are all cross-compatible), the motor won’t be available as an aftermarket upgrade. It is OEM only.

Hopes dashed, let’s take a closer look at the Bosch CX Race Motor that could be on your next eMTB.

The Race Motor isn’t any more powerful; it still offers a maximum torque of 85 Nm and cuts off at the regulation-stipulated 25 km/h. In Race Mode, the 400% assist gets you up to speed faster — in other words, it accelerates harder.

Joris Ryf, Swiss eMTB Pro, said, “The most important thing for me was a drive unit that would get me up to top speed faster and keep me at top speed for longer — and we succeeded.”

An early version was tested at the Enduro World Series-E (EWS-E) in 2021 under MTB Legend Tracy Moseley. It was a Performance Line CX motor that had received some tweaks, with a special Race Mode that Bosch tailored to her specific needs.

However, it’s not just some new firmware on the Bosch CX Race Motor; it’s a bit lighter, too. Bosch isn’t too specific here, but the materials used for some of the internal parts are lighter, allowing them to shave 150 g off the motor’s weight.

This weight reduction brought it down to a claimed 6.1 pounds, making it the lightest drive unit in the entire Bosch portfolio (still a bit heavier than the 5.7-pound Shimano EP8 e-bike motor).

What Modes Are Available in Addition to Race Mode?

That will be up to the e-bike manufacturer to decide. On the 2023 Trek Rail we rode, the modes offered were as follows:

The terminology is a bit confusing, to be fair, and actual numbers would be easier to understand, but in the absence of that information, here’s a quick overview of how each mode behaves from Bosch. 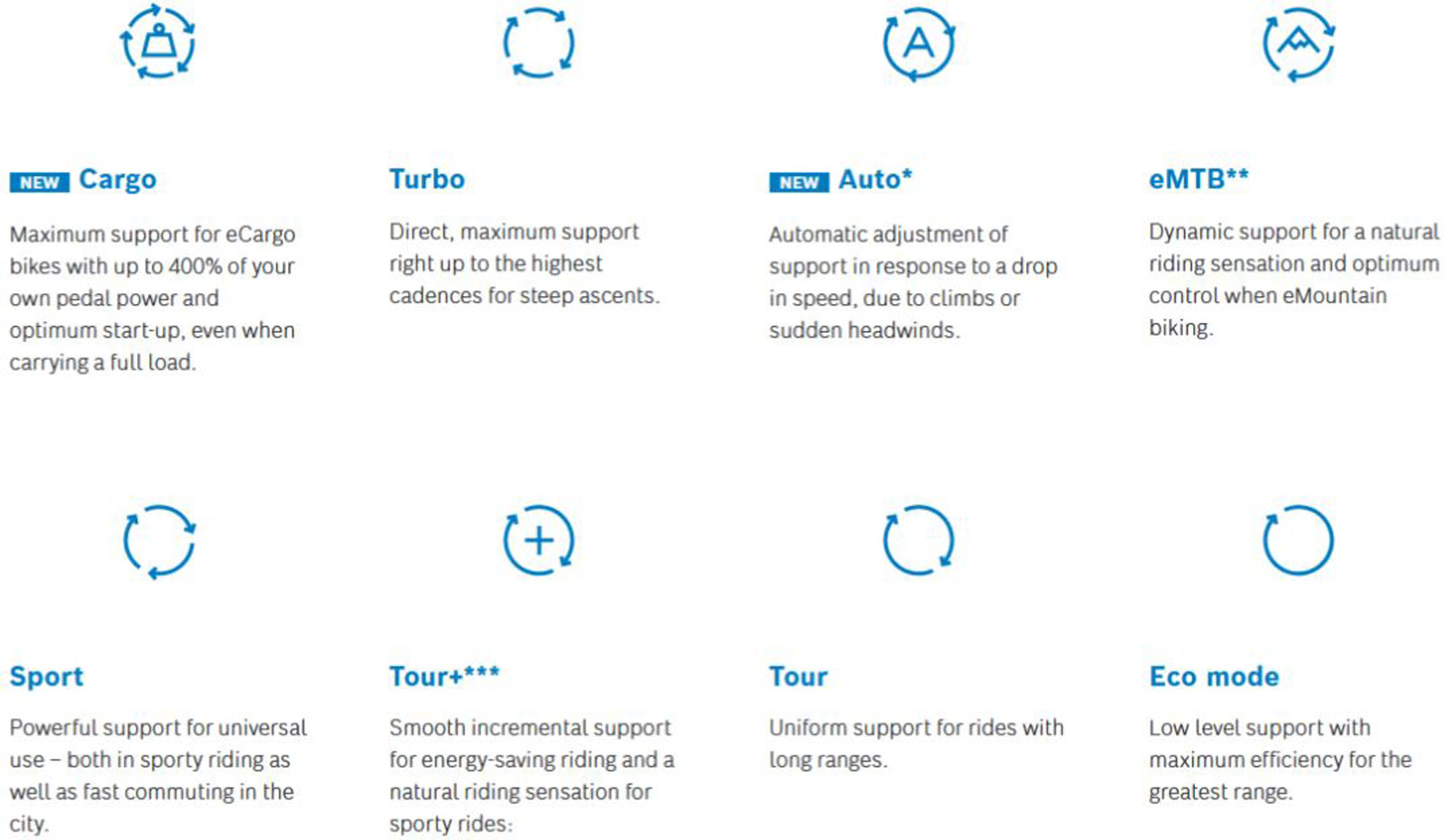 How Does the CX E-Bike Race Motor Ride?

Having wrecked myself on the trails that morning, I was up to little more than a spin around the park. Honestly, I didn’t think I would be able to notice any tangible differences in how the e-bike motor performed. How wrong I was.

Of course, the step change from Turbo Mode to Race Mode was appreciable; the acceleration offered by Race Mode was satisfyingly faster than that provided by Turbo. While that was cool, it was something else about how the motor behaved that, at first, shocked and appalled me. It put a big smile on my face as I realized the implications for technical climbing.

When I stopped pedaling, the motor delivered power to the rear wheel. That is the case on the Performance Line CX Motor, too, but that “Extended Boost” feature in the exclusive Race Mode was enhanced. It felt like the motor was still dishing out watts up to a full second after I had stopped pedaling.

When I asked Bosch about this, they clarified that the distance traveled was the limiting factor here.

The Extended Boost will give you an additional 6.5+ feet of distance traveled after you’ve stopped pedaling. So, the time that the Extended Boost operates over depends very much on how fast you are going.

I was tinkering about at speeds close to zero along the flat and on very steep banking, so the Extended Boost felt almost throttle-like. Tracy Moseley used the words “lunge” and “surge.” I could tease the pedals through a quarter of a pedal stroke, and the bike lurched forward.

The benefits this will offer to specific technical climbing scenarios were obvious. Consider yourself faced with a steep, rocky, technical climb. It’s the kind of climb wherein completing a full revolution of the pedals runs the risk of smacking one of those pedals into a rock, resulting in, at best, a stall and a quick dab, and at worst, a complete departure from your bike.

With the Extended Boost offered in Race Mode, riders could conceivably be teasing the bike up gnarly technical climbs without ever having to risk a complete pedal stroke. Of course, that could be a disadvantage when faced with a sniper root-ridden slippery slope. At that point, I imagine one would drop down into one of the lower assistance modes to prevent the rear wheel from spinning out.

It was more of a shock to the system, feeling like you’ve started dragging the brakes, but it does mean the motor will help riders go faster for longer.

Will the Bosch CX Race Motor Be at the EWS-E Finale Ligure?

It sure will! We can confirm that MTB legend Tracy Moseley will be on the latest Trek Rail e-bike sporting the production CX Race Motor for the first time.

Given that the EWS and DH World Cup Seasons are now over, Tracy’s Trek Factory Racing Team members Jamie Edmondson and Hattie Harnden are on the start list, too. They could also be on a Trek Rail powered by the Bosch CX Race Motor.

Now for some speculation. Given today’s announcement of the Bosch CX Race Motor, we wouldn’t be surprised to see this final race of the EWS-E Season offer a glimpse of some new e-bikes.

Lapierre, Orbea, and Scott all have enduro e-bikes at the EWS-E, so keep an eye on what bikes are underneath Adrien Dailly, Antoine Rogge, and Kevin Marry (Lapierre); Edgar Carballo Gonzalez and Florencia Espineira Herreros (Orbea); and Remi Absalon (Scott).

E-bike-maker QuietKat and Jeep collaborated on one of the burliest e-bikes you could get.  Read more…

Saving…
Brooklyn Bell and Jaime Hill Test the New Juliana Furtado Mountain Bike
An Ode to Crust Bike’s Romanceur, From the Designer Himself
×