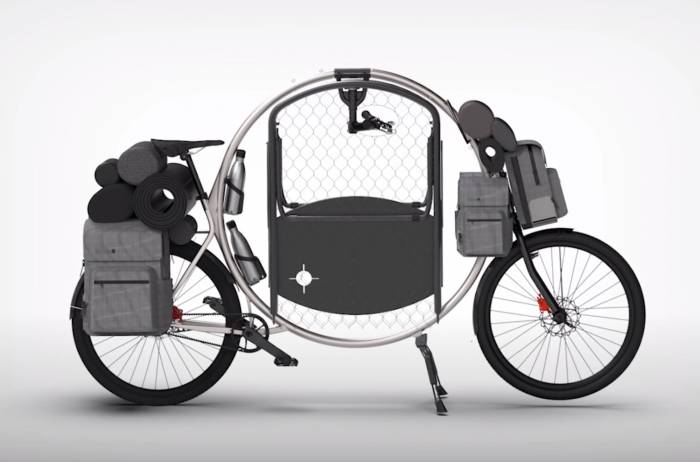 The Cercle uses magnets to transform into a chair, table, and bed, while still staying mobile; (photo/Cercle The World)

Cercle The World is a transformer-like bicycle that comes with a chair, table, and bed built into the frame. It appeared at Eurobike 2022 this summer.

Six years ago, Bernhard Sobotta strapped on a backpack and left his hometown of Munich, Germany, to wander Europe.

He managed to cross the Alps on foot, but by the time he got to Italy, his feet ached from the pain. So Sobotta got himself a little bicycle.

“All of a sudden I was extremely happy,” he wrote on Facebook. “All this exhausting walking enabled me to take an unparalleled look at this ingenious invention we call bicycle.”

The German’s love affair with bikepacking ultimately led him to create Cercle The World, an innovative bicycle he promotes through several online platforms. (And yes, that’s the French spelling of circle. And it’s a little unclear if he calls the bike simply “Cercle” or “Cercle The World,” which is also the name of his community on Facebook.)

A prototype of the bicycle, which can transform into a nifty little campsite, showed up at Eurobike 2022 in July. The bike’s design revolves around the inclusion of a chair, table, and bed that can fold out from the frame.

It uses magnets to achieve this, and the bike converts to chair mode in a matter of seconds, Sobotta said. With a frame and two tent poles added to the mix, it also converts to a tent for camping.

“A bike can possibly be so much more than merely a means of transport,” Sobotta said.

A Work in Progress

First conceived as “a proof of concept” in July 2020, Sobotta and his brother spent 2 years developing the bike, he wrote on Instagram. After more than 2,000 km of ride-testing — and an internship with Alex Clauss of Portus Cycles — he finally finished the first prototype in August.

The bicycle’s design centerpiece is, of course, the circular frame. The components for the bed, chair, and table fold neatly into the center, with the handlebars up top.

Cargo bags attach in front and behind the circle, including all the equipment needed for a quick-setup campsite. In its chair/table form, the bike turns into a decent-looking workspace (complete with MacBook in the promo video).

When it’s time for some shut-eye, the chair folds down completely into a bed. Slap a camping mattress on that, and it’s almost “too comfortable,” Sobotta wrote on Facebook.

After seeing the bike at Eurobike 2022, a review from The Radavist agreed. “It’s designed to fit on European trains … and has built in the most comfortable folding bed I’ve ever tried,” the review said. “The adjustable bar position and the way that works with the cable-actuated steering system is incredible.”

If you’re already in love with this idea, you’ll have to wait to (maybe) get your hands on one.

Sobotta plans to build more Cercles through a crowdfunding campaign this year, he told BikeCitizens.net. That campaign will be tied to a world tour on the bikes with a close friend.

However, Sobotta hasn’t yet announced the campaign. If and when he does, the bike likely won’t come cheap. Among its many specific bike parts, the Cercle uses a Pinion P1.18 gearbox, which can cost around $2,000. 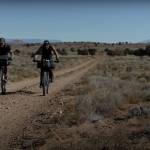 3 Massive Bikepacking Rides in 8 Days: Watch How in This 3-Part Film Series

Chris Wilson and a friend headed to Utah with an epic goal in mind: to ride three separate bikepacking routes over 8 days. And these aren't just any rides. Read more…